Stablemates to do battle at Caulfield

The Robbie Griffiths and Mathew de Kock stable held out hope that Daily Bugle would win a high-level stakes race and eventually make a stallion proposition.

But as Daily Bugle’s three-year-old career winds down, the realisation that is unlikely to be achieved has sunk in for Griffiths who admits it is now too late to geld, this season anyway, the son of Press Statement. 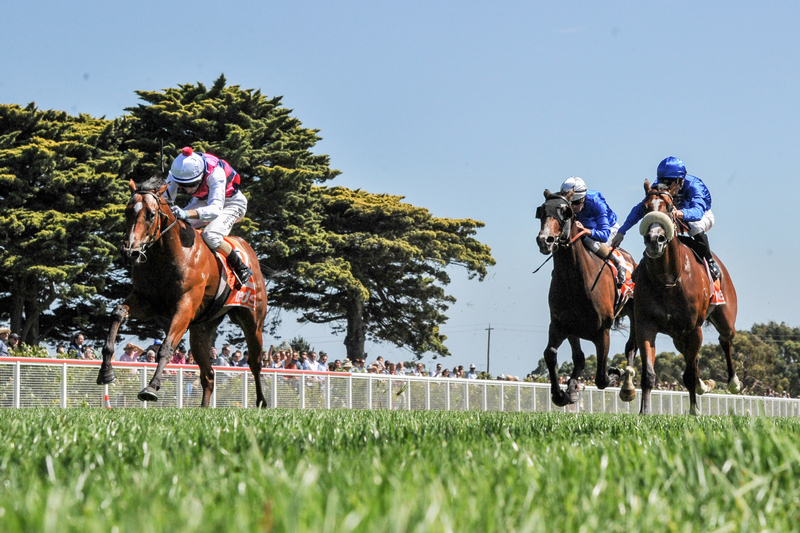 Griffiths is looking for a turnaround in form by Daily Bugle, picture Racing Photos

Daily Bugle and stablemate Ocean Raider (NZ) head to Caulfield on Saturday to run in the Stephen Howell Memorial Trophy (1400m) with Daily Bugle, in particular, looking to get back into winning form.

Griffiths admitted to being a little disappointed with Daily Bugle, although he did get into the trainer’s good books with his last start fifth at Flemington on June 4.

“We probably now regret not gelding him after the spring,” Griffiths said. “But he had been racing well and we thought we could leave his manhood, so we ended up changing some gear and put blinkers and a crossover noseband on him and it did the trick last time.

“We think those gear changes may be able to carry him through the VOBIS three-year-old series of races before he becomes a summer gelding. What is going to fix him, can’t be done this campaign.”

Ocean Raider (NZ) broke through on the Pakenham Synthetic at his last start and Griffiths said plans were to try and get the gelding a start in the Silver Bowl Series Final (1600m) at Flemington on Saturday week.

Griffiths said Ocean Raider (NZ) ideally should not be coming back in distance and heading to town as he is also entered for a Pakenham Synthetic race on Monday, but there was a massive difference in prizemoney.

“Coming back to 1400 metres, he may only be fifth, sixth or seventh in a race like that, but if he can get some points, he might sneak into the final the following week,” Griffiths said.

“Whether we’re doing the right thing, I’m not sure, but we would like to get into that final, but one thing I do know is he’ll be a lovely summer four-year-old.”