Grade 1 horseracing action in Japan returns this coming weekend, Sept. 29, when the Sprinters Stakes will be run at Nakayama Racecourse in Chiba Prefecture, just a short distance from central Tokyo. The 53rd running of the race has attracted 19 nominations for a maximum field of 16, although a couple of horses among the entries will not be running. Stelvio will miss the race due to a problem with the horse’s right eye, and another absentee will be 3-year-old filly, Gran Alegria, who has to pass on the race because of issues with her left foreleg.

The Grade 1 Sprinters Stakes is a race for 3-year-olds and up, and was first run in 1967. It became a Grade 1 in 1990, and an international Grade 1 in 1994. The 1,200 meter race starts in the backstretch of the outer turf course at Nakayama, and runners soon meet the first gentle curve at the top end of the course, leading them to the tight turn for home and the 310 meter homestraight, with its rise shortly before the winning post.

There are no overseas challengers this time around, but plenty of local speedsters are on hand to give the race its usual flair. In the past 10 years, 5-year-olds have just had the upper hand, winning four times, while 6-year-olds have claimed the race three times in that same period. Last year’s winner Fine Needle became just the eighth first favorite to enter the winner’s enclosure since 2000. The race record is held by the great Lord Kanaloa, when he set the time of 1 minute, 6.7 seconds, as a 4-year-old in 2012.

Here’s a look at some of the runners expected to line up for Sunday’s big race, which will be Race 11 on the Nakayama card, with a post time of 15:40 local time:

Danon Smash: The 4-year-old colt might have to carry 57kg, but the Takayuki Yasuda trained runner is probably the one they all have to fear. The horse has six wins from 13 career starts, and four of his victories have come over 1,200 meters, the latest of which was in the Grade 3 Keeneland Cup in August, when he justified favoritism to win in style. The trainer won the race three years in a row with Curren Chan (2011) and Lord Kanaloa (2012 and 2013), and believes this son of the latter can emulate his sire. “It was a big result last time, when you consider the draw he had and that he had to take the outside route all the way. He showed a lot of class to hold the horse on the inside at the finish. He’s been working well back at the stable since that trip to Sapporo,” the trainer said. Atop the jockeys’ table this year, Yuga Kawada, is set to ride Danon Smash. 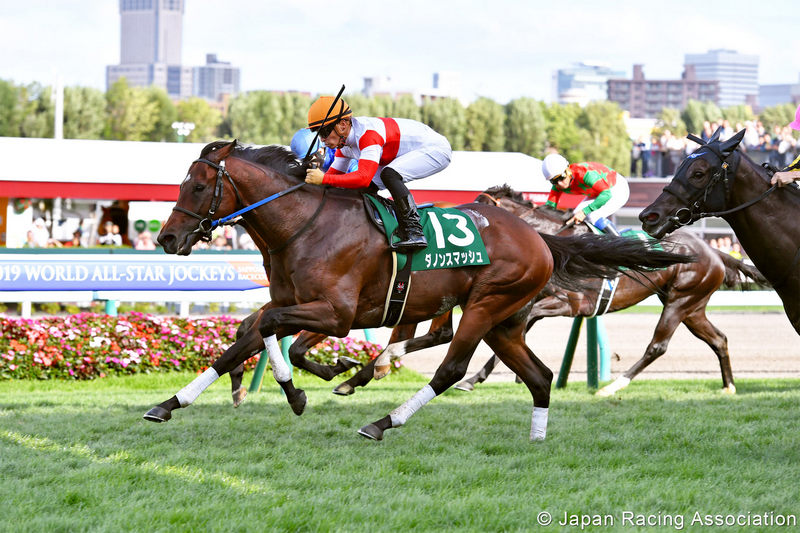 Tower of London: The horse that had to settle for second behind Danon Smash in the Grade 3 Keeneland Cup was Tower of London. Since then, however, the powerful colt by American bred Raven’s Pass won the Grade 2 Sankei Sho Centaur Stakes by three lengths at Hanshin early this month, and what’s more did it in record time, a time that equaled Lord Kanaloa’s record in the Sprinters Stakes at Nakayama. Earlier in his career, Tower of London was racing over longer distances, but has become one of those horses that really proves their worth when brought back to sprinting distances. Assistant trainer Hideyuki Chishima said, “He’s done well having two races in quick succession, and has handled the heat and the transportation well. It was just his third start over 1,200 meters last time, but he changed gears impressively when it mattered, and then ran on strongly down the outside from the final turn.” Tower of London is also the winner of the Summer Sprint Series of races held over the last few months, and with the withdrawal of Gran Alegria, becomes the sole representative in the race for trainer Kazuo Fujisawa.

Mr Melody: The 4-year-old American bred colt by Scat Daddy is looking to become just the sixth horse in history to claim the Grade 1 Takamatsunomiya Kinen (run in March) and the Sprinters Stakes in the same year. He’s coming off a slightly below par run in the Grade 2 Sankei Sho Centaur Stakes this month, when he finished eighth, after having raced in fourth for much of the race. The stable thinks he can improve on this run. “He didn’t quite manage to run on at the end last time, and even though he was in good shape, I put it down to him not having had a run for a while and not quite being so sharp. He’s come out of that race fine, and I think he’ll be different for this next race,” said assistant trainer Nobuyuki Tashiro. Mr Melody has Grade 1 winning connections on his side, with trainer Hideaki Fujiwara having won 10 JRA Grade 1 races, and jockey Yuichi Fukunaga, currently with 23 JRA Grade 1 races to his name.

Dirndl: The 3-year-old Northern Farm-bred filly by Rulership looks to be quite a sprinting prospect. All seven of her career races have been over 1,200 meters, and she’s never finished outside the first two. She also has two course and distance wins at Nakayama, both as a 2-year-old. In the Sprinters Stakes, because she is a 3-year-old filly, she gets to run off a mark of 53kg. Trainer Yutaka Okumura has held a trainer’s license since 2014 and is hoping, that despite the step up in class, Dirndl can give him his first taste of Grade 1 success. He said of the filly: “Despite missing the break last time, and having to run on later on the inside where the track condition was not so good, she put in a good run. It tells me she’s not worried about how a race might be run. She’s had a short break at the farm and all’s well with her.”

Fantasist: Coming off a second-place finish to Tower of London in the Grade 2 Sankei Sho Centaur Stakes last time, the 3-year-old colt takes on his fourth Grade 1. His best ever finish at the top level was fourth in the Asahi Hai Futurity Stakes in 2018. Jockey Yutaka Take knows the horse well, having ridden him eight times already, and the evergreen Take recently notched his 4,100th JRA win, which includes 76 JRA Grade 1s. Trainer Tomoyuki Umeda thinks the Lord Kanaloa colt can show what he’s made of here. “Two starts ago in the Kita Kyushu Kinen he was coming back from a spell, but in his most recent race he was switched on and ran well, putting in a good time too. It’s encouraging to look to his third start after returning and to take on this Grade 1,” the trainer said.

Seiun Kosei: With big guns Stelvio and Gran Alegria having to miss the race, the 6-year-old Seiun Kosei could well come into his own here. An experienced sprinter with Grade 1 races on his CV (including a victory in the 2017 Takamatsunomiya Kinen), he is really just looking to overcome his handling of the Nakayama track. Trainer Hiroyuki Uehara also thinks the same. “His rotation going into this race is different from last year, so I feel his condition is better this time. He trained well on Sept. 19 and he’ll have one more piece of work before the race. He hasn’t had such good results at Nakayama, but I’m hoping this time things will be different,” the trainer said recently.

Last, but by no means least, 4-year-old American bred filly, Mozu Superflare, deserves attention for her course and distance record at Nakayama. She is three wins and one second from her four races at Nakayama over 1,200 meters, and what’s interesting is that she has always found the front right from the start in those runs. On Sunday the same tactics could apply, and if things go right for her, the others will have to be on their guard. Mozu Superflare is coming off a fourth-place finish in the Grade 3 TV Nishinippon Corp. Sho Kita Kyushu Kinen over 1,200 meters in August.