Trainer Lance O’Sullivan admits his confidence in Rocket Spade’s prospects for Australia’s richest staying classic hasn’t been bolstered by the subsequent Australian performances of the pair that trailed him home in the Gr.1 New Zealand Derby (2400m).

Rocket Spade is on the third line of betting for the A$2 million Gr.1 Australian Derby (2400m) at Randwick on Saturday after beating Milford by a short neck in the New Zealand Derby, with Frontman a further short head back in third.

But in their respective races since the New Zealand Derby, both Milford and Frontman – who races as The Frontman in Australia – disappointed when finishing well held eighth-placings in their Australian debuts, Milford in the Gr.1 Rosehill Guineas (2000m) and The Frontman in the Gr.2 Tulloch Stakes (2000m).

“If they had been running close-up it would have given us a lot more encouragement,” said O’Sullivan, who trains Rocket Spade in partnership with Andrew Scott.

“Whether they’ve had good runs into the race or not I’m not too sure. Certainly, from our point of view it is a little bit disconcerting, but we won’t know for sure until the race.”

One thing that might help is that Rocket Spade hasn’t usually won by large margins but instead does what he needs only, suggesting that he potentially has more to offer than he needed to win the New Zealand Derby.

“You don’t know until they come up against the best, but he is a colt and he does tend to win his races by small margins, barring his last start. He’s one of those horses that is in for the fight.” 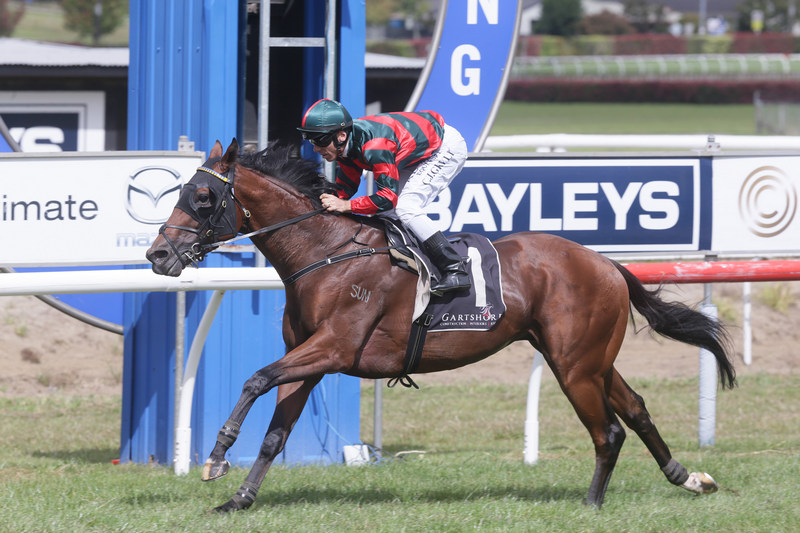 O’Sullivan and Scott took a different path than usual to the Australian Derby, opting to run their colt in a 1600m three-year-old race at Tauranga instead, a race he won very easily.

“It was just a run to fit in with his programme,” O’Sullivan said.

“The result was of little consequence but it was certainly encouraging what he did and the way he did it. It showed that he’s still wanting to gallop.

“He travelled well to Sydney on Monday and ate up very well on Tuesday night.”

Also in Sydney for the O’Sullivan-Scott team is veteran stayer Sir Charles Road, who runs on Saturday in the Gr.2 Chairman’s Quality (2600m), a race he won three years ago.

Sir Charles Road put up his best performance in some time when finishing second in the Gr.1 Auckland Cup (3200m) on March 13, and O’Sullivan said he was in good condition.

“He’s left New Zealand in good form, and he likes Australia – it’s like a second home to him.

“It’s very difficult to gauge what he’s running against with all the European stayers that he’s taking on, but he’s very well.”

All going well, Sir Charles Road will be back at Randwick the following week for the Gr.1 Sydney Cup (3200m), looking to improve on the third-place finish he recorded in that race in 2018.

Meanwhile, the stable’s leading filly Force of Will is heading to Queensland after finishing sixth in the Gr.1 Vinery Stud Stakes (2000m) at Rosehill last Saturday.

She is likely to revert to 1600m, the distance at which she won the Gr.3 Desert Gold Stakes in January, for the Listed Princess Stakes at Doomben on April 24.

“There’s some really nice lead-up races for the fillies there and if she goes well she will continue to compete in those races.”