So Hi Class gains the verdict in KSA

If there was a knock on So Hi Class heading into Sunday’s $100,000 Kranji Stakes A race over 1400m at Kranji, it was the fact that he had not won over the trip before.

Or maybe that the Irish-bred six-year-old had not won beyond Class 3 company.

He also had not won for over a year, so one could be excused for thinking that the Jason Ong-trained gelding would need things to go his way to win today. 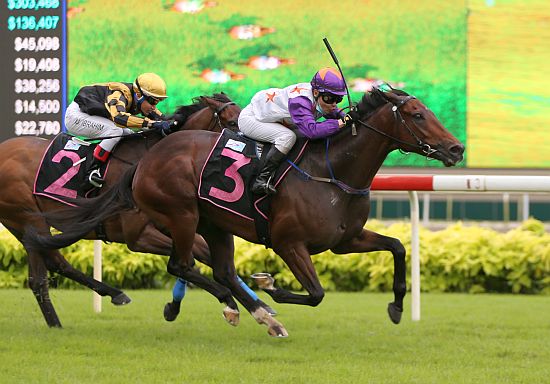 So Hi Class (Koh Teck Huat) bounces back to his best in the Kranji Stakes A race, picture Singapore Turf Club

But things went his way from the get-go: So Hi Class ($50) claimed his seventh career win under jockey Koh Teck Huat and his handy one kilo-claim, getting the job done in style.

After jumping well from gate four in a small field of seven, Koh had So Hi Class travelling beautifully with cover behind Nepean (Jake Bayliss) and parked just outside race favourite – Spirit Of Big Bang (Ibrahim Mamat), while Red Ocean (Wong Chin Chuen) led in front.

Peeling off heels upon entering the straight, Koh had Nepean’s measure early and once he sided up to Spirit Of Big Bang at the 200m, the race was his to win.

It was not easy though and with his mount hanging in on Spirit Of Big Bang at the 175m, Koh had to revert to hands-and-heels to keep both the momentum and So Hi Class straight. Once clear of his biggest rival, it was homeward bound with a couple of cracks of the whip late.

The result was never in doubt in the concluding stages with So Hi Class winning comfortably by three-quarters-of-a-length over the game Spirit Of Big Bang. Quarter Back (Louis-Philippe Beuzelin), who looked a hope at the 200m, finished a neck away in third.

“He gave me a good feel today. We jumped handy, travelled nice and I nursed him a bit into the straight.

“I was confident but he hung in a bit so I had to put the whip away, but once he crossed the favourite (Sprit Of Big Bang), I knew we had won.

“He had been working well and is always up there – the small field helped today - and with 53kgs, he was always a chance to win.”

The double gave the somewhat underrated Koh his 16th winner of the season  - a remarkable effort given the hardworking hoop had been languishing down the table in previous years.

“I really have to thank the Singapore Turf Club for having faith in me when I wasn’t riding winners,” said Koh, who rode nine winners last year after only four in 2020.

“I had been down for a while but I kept working hard with some good trainers and I tried to do well, so owners would trust me and put me on their horses.”

“He (Koh) hasn’t had a lot of opportunities the last few years,” said Ong, who now has a very healthy 25 winners for the season.

“So he has been working hard for us. He’s good and lightweight jockeys are hard to find, so I thought I would support him.

“He’s riding well so owners are happy to put him on and the bottom line is that he has been delivering – plus he’s a local.

“He rode him (So Hi Class) patiently today, so all credit to him.”

A winner of seven races from 34 starts, So Hi Class has brought his stakes earnings to over $300,000 for winning connections.

Worthy mentions on the card

Two other jockeys pulled off a brace on Sunday. Jockey Vlad Duric scored with Mariana Trench (see previous report) in the $75,000 Restricted Maiden race and In All His Glory ($16) in the $50,000 Class 4 race, both over the mile. Jockey Shafrizal Saleh turned super-sub after Winning Power ($114) outran his rivals in the $30,000 Class 5 Division 2 race (1200m) and Summer Wind ($212) surprised at big odds to win in the Lucky Last. 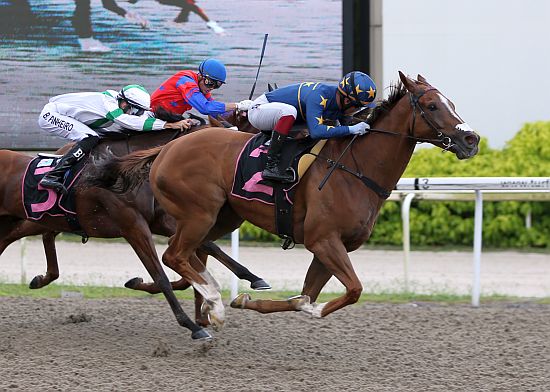 “Three different jockeys (Blake Shinn, Lerner and Benny Woodworth) too – disappointing for (jockey) Danny (Beasley) to be suspended as he’s a big part of the team - but really massive effort from the stable staff.

“Especially with the older horses – (Lim’s) Zoom and (Lim’s) Passion – as they need extra work, so I’m really proud of the team.”