Size strikes back in championship battle

John Size extended his slender lead in the trainer’s premiership in the face of a John Moore assault at Happy Valley on Wednesday night..

One win separated Size and Moore at the start of this evening’s nine-race card. Moore drew level when Magic Legend ended a two-year losing streak but Size struck back with a double in the last two races, bringing the score to 76-74. Sunday’s 11-race Sha Tin finale will decide the outcome.

“It feels a little bit temporary to me but we’ll keep trying,” Size said after re-taking the lead, aware of course that this weekend Moore will empty all that his arsenal still holds.

Size has led the championship for most of the season but Moore has upped the ante in recent weeks, chipping away at his rival’s lead. Before tonight, the former had saddled only two winners since 16 June, the latter had welcomed seven.

“John Size doesn’t take it lightly,” Moore said after Magic Legend equalled the tallies at 74-74 with a three and a quarter-length win in race seven, the Class 3 Silver Grecian Handicap (1200m).

There was jubilation in the Moore camp when Matthew Chadwick returned victorious, confidence buoyed by the knowledge that the stable was set to send out warm favourites in the night’s remaining two races. But even then, Moore was calling for restraint

“We haven’t won it yet! I don’t want to count my chickens before they hatch,” he said. “We’re level now and it’s going to go down to the wire – this is one hell of a trainer that I’m up against.” 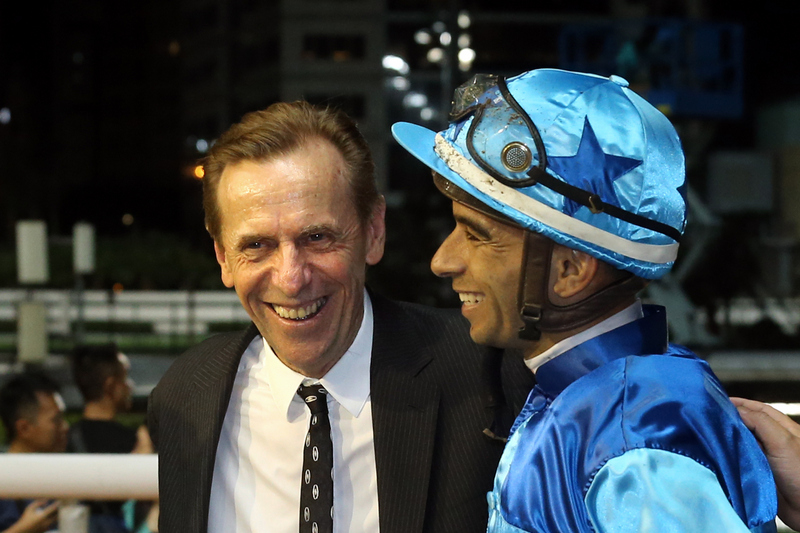 Sure enough, the defending champion struck right back. True Grit (131lb) responded to an indefatigable Joao Moreira drive, powering from last place, through a wide passage, to nail the Class 3 Sweet Orange Handicap (1800m) by a neck. Moore’s 1.8 jolly Tashidelek (125lb) was third.

“It’s an amazing training performance with this horse, amazing what John Size has done with him to bring him from Class 4 all the way to Class 2 after tonight, in just three months,” jockey Joao Moreira said.

True Grit’s win was his fifth on the bounce. The four-year-old is now five from nine all told and once again lived up to his tough name despite his “unassuming” appearance.

“He’s by a sire called Wanted and I’m guessing John Wayne’s got something to do with the name,” Size said, True Grit being one of the legendary actor’s most famous films.

“He doesn’t look like a horse that would win five in a row, he doesn’t present like that, he doesn’t even travel in a race like that but he’s obviously got an aptitude for racing and he seems to understand where the winning post is – he seems to arrive when it does and that’s about all you want.”

The Size team celebrated again when Tornado Twist (123lb) dug deep for Moreira and fought his way to a neck win in the last, the Class 2 Sun Jewellery Handicap (1200m). Moore’s Sunny Boy (120lb), the 2.6 favourite was only sixth.

“It’s an incredible job by John Size and I’m very pleased to ride another winner for him – he’s the guy,” the stable’s retained jockey said. “Everyone knows that I’m backing him up otherwise I’d have gone to being a freelance jockey by now.

“The competition between him and John Moore is outstanding for the sport and they both are amazing trainers. Whoever wins deserves it. I hope Size wins but if John Moore wins he will have deserved it.”

When asked if he was enjoying the tussle for what he hopes will be his 11th champion trainer title, Size laughed, almost incredulous at the notion.

“No!” he said. “Every sport’s the same, there’s a winner and a loser and a sportsman’s life is like that from start to finish. I see a lot of individual players in many different sports under a lot of pressure because they have to do everything themselves, whereas a horse trainer actually has a team of people helping him so it’s not so bad. Every day you pick up the paper and there are winners and losers. A sportsman’s life, that’s what it is and you have to endure it.”