When the heavens opened at Kranji on Saturday, trainer Michael Clements’ confidence over his French debutant Sincerely grew just that little bit more, even if the left-hand way of going still bothered him.

Back home, the French-bred Evasive four-year-old, then known as Quindio, raced exclusively in the clockwise direction, mostly on the provincial circuit for two wins, including a Listed race (Millkom Stakes) over the mile at Toulouse just over a year ago.

At his first win on the all-weather in Pau, he scored over 1500m on a soft track, hence the yard bullishness when the Kranji track was officially rated as yielding. 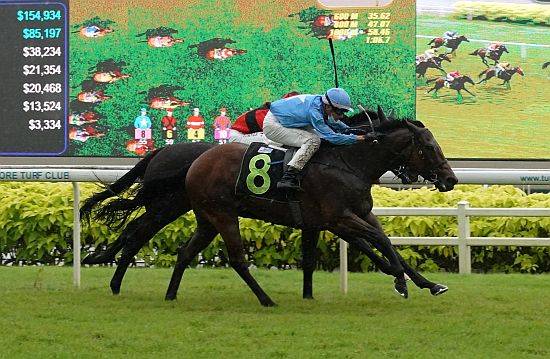 Sincerely (Louis-Philippe Beuzelin) gets the better of So You Too (Marc Lerner) by a neck in Race 6, picture Singapore Turf Club

From the jump, Sincerely ($18) oozed ease on this kind of surface as he was tucked away on the fence by Louis-Philippe Beuzelin.

The leading trio of Cousteau (Benny Woodworth), Flak Jacket (Matthew Kellady) and Magnifique (Juan Paul van der Merwe) set a steady tempo upfront. Cousteau stood his ground better into the straight, but as he rolled off, Sincerely popped onto the scene as the horse to run down.

Wecando (Ruan Maia) tried to rally, but it was So You Too (Marc Lerner) who had charted the same path as Sincerely along the rails, who proved the hardest to shake off.

For a second, it looked like Cliff Brown’s charge would get his measure, but Sincerely never shirked the task and kept finding to score by a neck. The pair detached themselves from the rest with Wecando filling the last minor spot 4 ¼ lengths away.

“European horses like a bit of give in the ground. He won on soft ground in France, but the opposite direction remained a question mark,” said Clements.

“All his wins in France weren’t at top tracks but he’s shown very good form. He’s been trialling well coming into today’s race, even if the pressure on raceday is different.

“He settled behind the leaders and got a run up the rails on the inside. At one stage, I thought the other horse would beat him, but he fought on strongly.”

Clements had another newcomer who was backed down to favouritism earlier in Tigarous in the $75,000 Restricted Maiden race over 1200m, but this time, they found one better in Happy Saturday (see earlier report), and by quite a wide margin – 5 ¾ lengths.

Also ridden by Beuzelin, the Irish-bred three-year-old by Dragon Pulse was outpaced early, but still knuckled down to the task late to clinch the first minor prize.

The Zimbabwean-born handler was, however, not at all disappointed with the run, having always held the opinion Tigarous would need more distance to be seen at his best.

“Tigarous is not a sprinter. He lacked the pace, Louis had to work on him the whole way,” said Clements.