Silent Is Gold can turn the Three-Year-Old tables

An honourable loss is a term that does not sit well with elite sportsmen.

But the fact remains that while Golden Monkey was super impressive when he took out the Group 3 Singapore Three-Year-Old Sprint on June 18 by over three lengths, Silent Is Gold well and truly had the rest of the field covered.

Golden Monkey also had the sit on the $11 favourite with the race run to suit, so you would imagine the Silent Is Gold camp would be somewhat confident of turning the tables in the $150,000 Group 2 Singapore Three-Year-Old Classic over 1400m on Saturday. 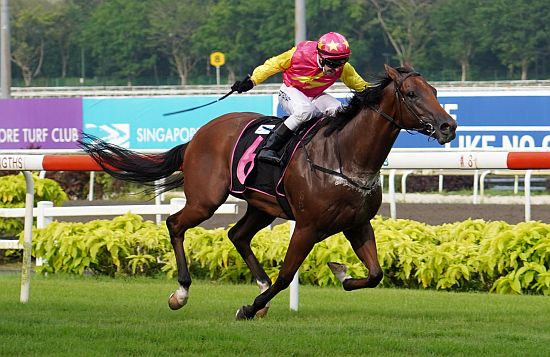 “The race was really set up for the winner last time,” said trainer Stephen Gray from his stables on Tuesday afternoon.

“We were always going forward in the Sprint – he had won his last two like that – but the stablemate (Gold Ten Sixty-One) of the winner took him on early.

“So while (jockey) Ronnie (Stewart) did the right thing and settled him nicely behind him, the winner had the sit on us the whole way, so it was always going to be tough.

“Look, he (Golden Monkey) could be the better horse, but in different circumstances and the runs are reversed, we would have gone close.”

Off the track, Gray thinks there is also a length or two to be found for the Star Turn gelding.

“We only had him in the stable a few weeks before that run and he probably raced a tad heavier than what is ideal,” continued the New Zealand handler.

“He’s a bit quirky, so we all had to get to know him and it was good to get that first run out the way.

“But he’s settled into our way of doing things now and is pretty relaxed in his work, so his fitness should have improved, which is also in our favour.

“The barrier draw (on Wednesday) will decide what we do tactics-wise on Saturday, but he showed he can race on a long rein and Ronnie agrees we don’t have to lead, so I told the owners we have options.”

“Yes, I was a bit shocked when he (Gold Ten Sixty-One) took us on but we got a nice trail,” said Stewart, who rode the mighty Jolie Shinju to a clean sweep of the Singapore Four-Year-Old Challenge series in 2009.

“But Golden Monkey had the jump on us and given he’s a good horse and we had to do the work, I thought our run was good.”

“In races he had won, he had the fence to guide him,” said the amicable Australian hoop.

“(Assistant-trainer) Saimee (Jumaat) has been doing most of the work on him since his last run and he’s teaching him not to be one-dimensional.

“So hopefully we can have an option or two over 1400m if Gold Ten Sixty-One or even Flashfast go forward.”

And what of the step-up to seven furlongs for the first time?

“At the end of the day, the 1400m is unknown to both us and Golden Monkey, so a few of the other horses who have been over the trip should have more of a say,” said Stewart who is married to wife Sheryl Cheam, with a two-year-old daughter Dakota.

“But we (Silent Is Gold and Golden Monkey) might be better than the others class-wise, so we will see what happens on Saturday.”

Elsewhere on the card, the Gray stable also thinks Hard Too Think can improve when taking on a very good Kranji Stakes A field over 2000m.

“(Jockey) Marc (Lerner) probably should have let him (Hard Too Think) roll along a bit more over the mile (in a Class 1 race on June 11),” explained Gray, who sits ninth on the 2022 trainers’ premiership on 16 winners.

“The race became a sit-and-sprint and at the handicaps, it was always going to be tough to win over that trip.

“But he wasn’t beaten far (two lengths) and Marc will learn from that. Also, 2000m is more of his journey.

“The Club (Singapore Turf Club) has done a great job putting this race on as the stayers need races like this and all the trainers are extremely thankful.”