While watching the $50,000 Class 4 race over 1600m unfold from the stands at Kranji, assistant-trainer Michael White told himself he would have no more excuses to find if Shepherd’s Hymn came a cropper again on Sunday.

The So You Think four-year-old is one of those many upwardly-mobile horses filling out champion trainer Michael Clements’ yard, but this one has somehow been stuck at Class 4 after his last win in September.

There was a good mix of placings but also a few howlers, the majority of which could, however, be defended with pretty much the whole gamut of racing mishaps - wide barrier, interferences, overraced, backed up too quickly. 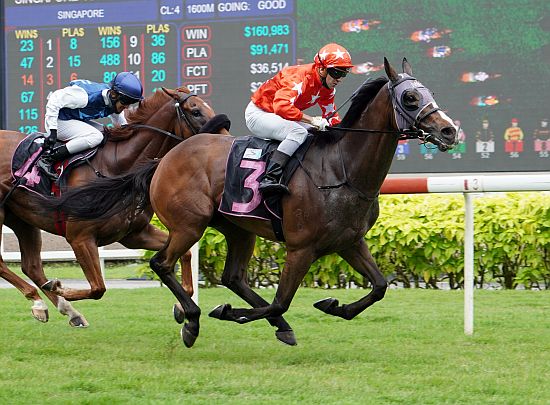 But with first-time partner Vlad Duric deftly navigating the two-time winner from an awkward barrier into a perfect stalking position in fourth about four lengths behind pacemaker Ironchamp (Matthew Kellady), it was now or never, thought White.

A few seconds of doubt lingered when the $14 favourite seemed to be taking a month of Sundays to reel in the runaway leader at the top of the straight.

But the four-time Singapore champion jockey rode him with supreme confidence as he nursed him along to within a half-length before finally pulling the shillelagh inside the last 100m.

Shepherd’s Hymn skipped clear to go and put one length on a brave Ironchamp with third place going to the fast-finishing Gold Kingdom (Juan Paul van der Merwe). The winning time was 1min 34.67secs for the mile on the Long Course.

“We would have been disappointed if he didn’t win today,” said White, deputising for Clements at the winner’s box.

“Once he was in this spot, he had no excuse. He’s had excuse after excuse at his last runs.

“Hopefully that is the confidence booster that he needed. He’s always shown us ability, but he’s still in Class 4.

“He took an age to get there, but he got the job done. He’ll be even better over more ground.”

Duric said that it was a matter of letting Shepherd’s Hymn’s superior stamina rise to the fore when Ironchamp came into their crosshairs in the home straight.

“He outstayed Ironchamp who was gallant in defeat. I was quite confident he would pick him up,” said the Australian ace.

Shepherd’s Hymn has now taken his record to three wins, four seconds and one third from 14 starts for prizemoney around $145,000 for the Maju Racing Stable.