Choosing Siam Blue Vanda over Top Knight might have been a tough decision to make for any jockey, but to Louis-Philippe Beuzelin, it was never really a toss-up.

The two Michael Clements four-year-old's have charted fairly identical pathways to the top of their age group at Kranji, with Siam Blue Vanda - named after the orchid - the slightly later bloomer.

Seven wins both, with a proven track record up to the mile, and potentially further. They also have ‘black type’ to their name, Top Knight as a three-year-old (last two Legs of the series, including the Group 1 Singapore Guineas over 1600m) and Siam Blue Vanda as a four-year-old when the son of Echoes Of Heaven won the Group 2 Stewards’ Cup (1600m) at his last start on March 20. 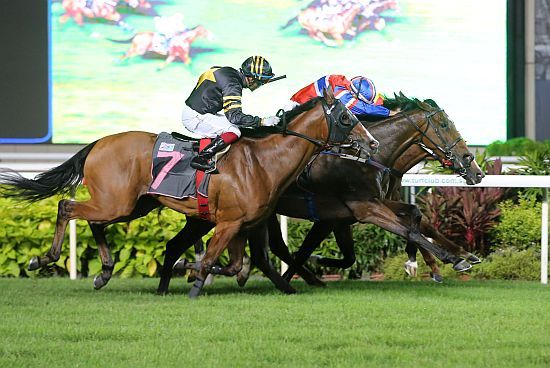 That race was another case in point there is nothing much between the two. At level weights, Top Knight with Vlad Duric up stormed home but the son of Zoustar missed out by a short head.

With the heavyweight Duric out of the booking equation given Top Knight’s handicap of 53.5kgs in this Sunday’s $100,000 Class 1 race over 1400m, Beuzelin, who rides the bulk of Clements’ horses and can on the other hand ride light, had the luxury of choice. Siam Blue Vanda’s weight is 54kgs.

Not forgetting a third Clements runner, Safeer (50.5kgs), who, though not as credentialled as the other two, is by no means the underdog going with his comeback race on July 11 when he ran on for fourth to stablemate Countofmontecristo.

Deep in his heart, it would seem the French jockey had long known which way he would sway – and it was geared towards only one key factor, the Group 1 Singapore Derby (1800m) on September 6.

“It’s a first-up run for both, but I chose Siam Blue Vanda because I want to align my loyalty early with the owners (Thai outfit Pupetch Racing Stable) heading towards the Derby,” said Beuzelin.

“I’ve won once with him (Class 3 race over 1400m on November 8), but was then suspended and lost the ride when he won with Daniel Moor.

“I begged to have the ride back in the Stewards’ Cup, but they kept Daniel on, even if (because of quarantine issues due to COVID-19) he was replaced by Harry (A’Isisuhairi Kasim) in the end - and they won.

“To be honest, I think Top Knight has a better turn of foot over 1400m. He’s in the best form ever and it won’t surprise me if he wins on Sunday.

“But my horse is also very well, even if he’s hard to judge from his work. He does the bare minimum, he’s quite lazy, but he saves his energy for racing, which is a sign of a good horse.

“Even when he wins, he does just enough. He can win on class on Sunday, which would be a bonus, but the long-term goal is the Derby for me.”

Clements has actually worked in another feature race before the Singapore Derby, which will for the first time in its history be open to Southern Hemisphere-bred five-year-olds given it will be held in September instead of April due to the reshuffle brought about by the pandemic.

“All three are being aimed at the Kranji Mile. Only Top Knight and Siam Blue Vanda are eligible for the Derby,” said Clements.

“I also have Countofmontecristo running in the Kranji Mile, and possibly On Line and Vittoria Perfetta, but they will have to win their next races to qualify.”

Clements said he gave Beuzelin carte blanche regarding his pick of the rides on Sunday. The Zimbabwean-born conditioner cannot split the pair, but holds a slightly different view on the horses’ optimum trips, and is certainly not ruling out a third party lowering their booms, Safeer.

“Louis has always held a high opinion of Siam Blue Vanda, probably because he sat on him before while he has never ridden Top Knight,” he said.

“Siam Blue Vanda is proven over the mile, but I feel we haven’t seen the best of Top Knight yet. Once he goes over 1800m and even 2000m, then we’ll see his best.

“He’s a genuine horse who always gives his best, and I expect that to be the case this Sunday, though it may be on the short side for him.

“In saying this, both horses have had a good preparation and good trials as well as Safeer, who has the fitness edge over them with his great prep run to Countofmontecristo and is also well weighted.

“Four times out of five, Safeer had a bad barrier. He needs a good barrier* for things to go his way.”

“The pull in weights can make a difference as well as the barrier draws*,” said Beuzelin.

“It’s quite an open race, with other good horses like I’m Incredible, who we all know is very good and will be a big danger.

“I worked and galloped both Siam Blue Vanda and Top Knight. They’re both a lot better, even if you can ignore their barrier trials as they both hate the Polytrack.

“This weekend’s race will be a big revelation, but like I said, I just want to prove myself to Siam Blue Vanda’s owners, and hopefully I stay right through till the Derby.”

* Interview was conducted before the barrier draw. Both Siam Blue Vanda and Top Knight have drawn well in three and five respectively while Safeer had no luck again, the outermost alley in barrier No 16.