Queries were raised as to how Vittoria Perfetta would handle Polytrack for the first time at Kranji on Saturday, but veteran jockey Saifudin Ismail had a gut feeling he would take to it like a duck to water.

The Malaysian jockey has been galloping the Zoustar five-year-old on the all-weather and while raceday conditions are not necessarily the same kettle of fish, he drew inspiration from a few similarities going into Saturday’s $70,000 Kranji Stakes C race over 1600m.

Having already partnered the handy Michael Clements galloper five times for one of his previous four wins also gave him an added edge. 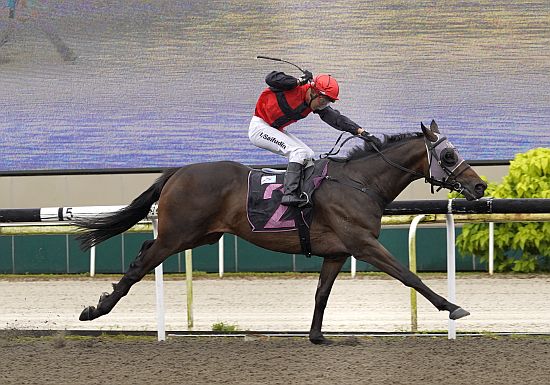 “I know it was his first race on Polytrack, but I’ve been working him for a couple of days and I was really happy with the way he worked on it,” said Saifudin.

“In the morning, it has a certain texture and I think this afternoon when the rain came and it was cooler, it felt a bit like the morning tracks.

“I was pretty confident he would go well. Mike left it to me to ride my own race.

“But when no-one went forward, I was quite happy to let him roll to the front. I’ve led on him before, but he was caught late.

“He can come from behind, but today with 58kgs on his back, I thought leading would help him, as I wanted the others to chase him.

“He was relaxed throughout, got a nice breather midrace and coming to the corner, when he took two to three lengths on them, I knew we were home.”

Indeed, while some thought the $38 chance would come back to the likes of On Line (Louis-Philippe Beuzelin), Karisto (Ruan Maia) or Luck Of Master (Benny Woodworth) in the run home, he never stopped under Saifudin’s persuader.

By the 100m mark, it was clear that his catch-me-if-you-can tactics had hoodwinked his rivals. Vittoria Perfetta went on to secure his fifth win by 1 ¼ lengths from On Line with Dancing Rain (Oscar Chavez) third another half-length away.

The winning time was a slick 1min 37.61secs, which would have shaved off 0.03 second from Tiger Force’s and Super Dynasty’s joint record, but Leatherhead had just two races earlier busted it to a new mark of 1min 37.45secs.

With a smart record that now reads five wins, one second and four thirds in 19 starts, Vittoria Perfetta has now brought close to $220,000 to the Cloud Nine Stable.