Royal Pavilion is back in the house

A rise in trip to the turf mile saw Royal Pavilion bounce back to his best on Saturday at Kranji.

The Casino Prince five-year-old has been tried over mainly shorter distances in his three seasons at Kranji, and generally on Polytrack, especially of late, but the switch in the $50,000 Gilt Complex 2017 Stakes Class 4 Division 2 (1600m) turned out to be an inspired move.

Held in amongst runners in midfield by Michael Clements’ apprentice jockey Shafrizal Saleh, Royal Pavilion ($65) unleashed a sizzling turn of foot once he was peeled to the outside in search of daylight in the home straight. 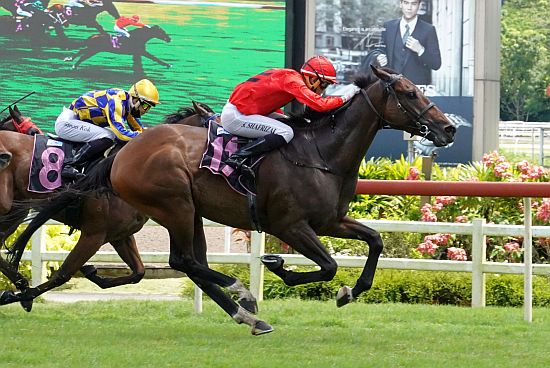 Upfront, Hard Too Think (Simon Kok Wei Hoong) looked to have the race all stitched up when he collared and raced past weakening leader Helushka (Mohd Zaki) until Royal Pavilion sprang late onto the scene with other intentions.

The Tivic Stable-owned galloper went on to post his second win with one length to spare from Hard Too Think with McGregor (Ruan Maia) in third place another half-length away. The winning time was 1min 36.05secs for the 1600m on the Short Course.

Following his quick-closing third in a Polytrack 1200m race on October 25, Clements thought another two furlongs would be worth a gamble, even if his only test over that distance (but on Polytrack) two years ago when then prepared by Shane Baertschiger was unsuccessful.

The Zimbabwean-born handler also saw the easier company he had dropped to would enhance his chances.

“He has come down a lot in the handicap in the last few months, right down to the bottom of Class 4,” said Clements.

“He was in the right place in the handicap, I spoke with the owner about trying over 1600m. We rolled the dice and he duly obliged.

“He ran on in a similar style as at his last races. He ran on strongly and the fact he claimed two kilos also helped.”

Shafrizal was with Zyrul Nor Azman among two apprentice jockeys who were promoted to the senior ranks from the 2021 season in a statement released by the Singapore Turf Club on Friday.

Royal Pavilion was bringing up the Malaysian jockey’s fifth win this prep, a far cry from his haul of 14 winners that earned him a third spot in last year’s apprentice jockeys’ premiership.

To be fair, it’s been a bit of a stop-and-start season for Shafrizal this year, hence the lower score.

“Shafrizal has not had the same number of opportunities as last year,” said his master.

“He was away to take part in an apprentice jockeys’ series in Australia but had to cut it short when COVID-19 struck. He came back in time before the borders closed.

“Obviously, there are fewer races now, but he’s still been trying his best. Next year, he’ll be a senior rider and I’m sure he’ll keep up the good work.”