The end of the Victorian spring carnival has hopefully signalled the start of a successful run for new training partners Robbie Griffiths and Mathew De Kock who landed their first city success at Sandown on Wednesday.

Griffiths needs no introduction as he has been among Victoria’s leading trainers for a number of season while de Kock is the son of leading South African conditioner Mike de Kock.

The partnership came about when father-and-son de Kock began looking around for a suitable place to open a stable in Australia.

They settled on Cranbourne but there were no boxes available and as Griffiths’ numbers had fallen following his health scare in 2019 it made sense for Mathew to join his training business.

Numbers have gradually increased and the pair is looking to increase their numbers beyond the block of 60 boxes Griffiths has at Cranbourne.

The pair had their first starters together on Geelong Cup day last month and prior to Wednesday’s success with La Pietra in the Ladbrokes Switch Plate (1400m) had notched six winners on the country circuit.

Under the guidance of Dean Yendall, La Pietra ($8.50) raced to a half-length victory from Tarantello ($14) with Dragon Time ($6) a half-neck away third.

“It’s really enjoyable when you have winners. It’s good that we’ve got less restrictions and I’m really excited about the season ahead.”

While it was the maiden win of La Pietra, de Kock believes the daughter of Pierro can race to a higher level.

“We think this filly is a nice filly and we came here with a bit of confidence,” de Kock said.

“Well done to the ATB syndicate and the whole team and I don’t think she’ll be just a one-time winner.

“A bit of maturity, a slight change in her program as she does a lot of work on the treadmill has worked and it’s a big team effort with her.

“She’s a scopey filly being by Pierro. I think this is the bottom of her distance so we’re really excited.”

Griffiths and de Kock were almost back in the winner’s enclosure in the following race, the IVE>Print Handicap (1600m) when Hasseltoff ($6.50) finished a three-quarter length second to the heavily-backed $1.75 favourite Chief Altony.

UPDATE - Griffiths and de Kock later made it a city double at Sandown when King Magnus took out the Tile Importer Handicap over 1300m. 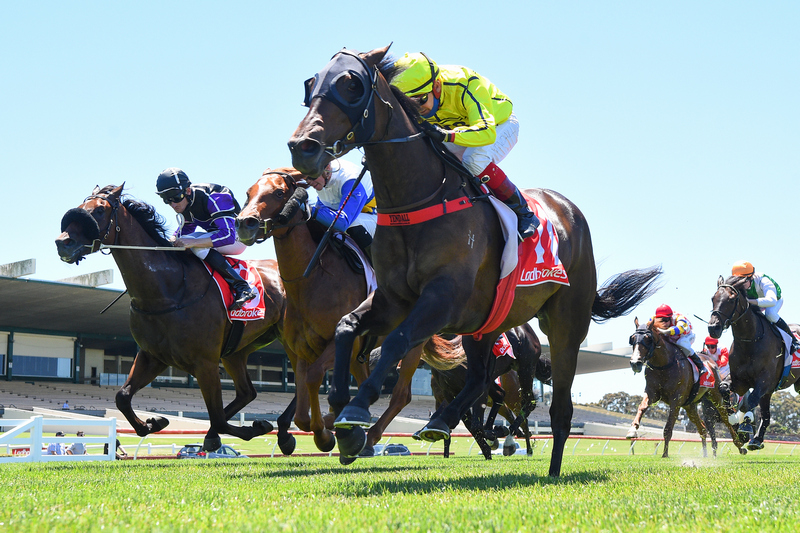