Relentless came up with a storming run to land the spoils in the $75,000 Debt Collector 2018 Stakes, a Restricted Maiden race over 1200m at Kranji on Saturday.

Unfancied at $99, the son of Hallowed Crown incidentally picked up a $10,000 sales credit from Magic Millions, a bonus which trainer Tim Fitzsimmons was very happy with.

“I knew about the bonus and it’s great for the Arexevan-Relentless Stable. It’ll come in handy when they go to the Magic Millions sales,” said the second-year Australian handler, who was bringing up his third winner for the season. 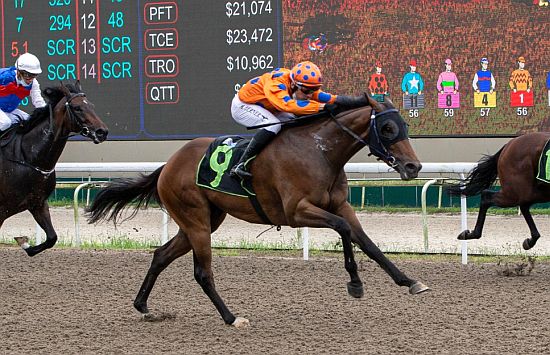 Relentless (Marc Lerner) comes from behind to open his account in Race 2, picture Singapore Turf Club

“It’s Peter Twomey who bought this horse for me at the Inglis Ready-To-Run last year. I then had the Arexevan boys come on board.

“It’s great I trained my first winner for the Arexevan Stable, we go back a long way since their days with (trainer) Cliff (Brown). My first runner Petite Voix was for them as well.

“They have just the one horse with me for the time being. I hope more will follow soon.

“I’ve always had a high opinion of Relentless. He was a bit immature and has taken a bit of time.

“He was mentally not quite there at his debut (August 8 when seventh to Be You). I gave him a break and he has come on from that run.

“He was also too close to the pace at his first race. He is better off ridden away and quiet, and he can finish it off like he did today.

“The race panned out very well for him. They went really quick in front and it suited him nicely.”

Indeed, unsighted for most of the way, Relentless in the conspicuous Arexevan orange silks was the fastest closer when angled to the outside. Pinning his ears back, he gobbled up the ground in brilliant style to finish over the top of his rivals.

Fitzsimmons also had the well-backed Ace Sovereign (Juan Paul van der Merwe) in the race, but contrary to his stablemate who dropped off to a nice relaxed run at the rear, the Darci Brahma plotted a wider course throughout to eventually run fourth 2 ¼ lengths off the winner.

“I thought he would run very well, but he had a hard race three to four wide. He still ran on well,” said his handler.

Newcomer The Archer (Shafrizal Saleh), who had been neglected in the betting compared to the other Falcon Stable debutant Beyond Compared (Ruan Maia), was being hailed the winner – and looking all poised to give trainer Alwin Tan his 500th career winner milestone - when he took the shortcuts home upon straightening to hit the lead, but was swamped late to settle for second 1 ¼ lengths away.

Fitzsimmons helms only a small-scale operation with 20 horses, but Brown’s former assistant-trainer could not complain with the way things have evolved since his quiet debut (winless) in April 2019.

“I have mostly new horses. When I get a spot for them, they are up against higher-rated horses,” he said.

“They need more racing experience. Things would have been different if we still raced twice a week.

“For example, Relentless should have raced on September 26, but he got pushed back to today.

“I’m still happy with the way my horses have been running as I’ve had many placings. I hope things can only improve from now on.”