Saturday’s race was restricted to two-year-olds that had been purchased through the sales of Magic Millions and is the only race in Victoria run right-handed.

The race has been staged since 2012 and run to give potential Magic Million 2YO Classic contenders, run at the Gold Coast in January, experience racing right-handed.

Trained by John Sargent, Readily Availabull, a $25,000 purchase in Tasmania, had finished fourth in a Randwick trial last month before winning a 900m trial at Rosehill on November 12 ahead of being dispatched to Melbourne.

Readily Availabull, ridden by Michael Dee, was a little slow into stride and was last turning for home as Rambeau took the lead from the $4.60 favourite Butter Blonde, the most experienced galloper in Saturday’s dash having faced the starter on two occasions.

Just as Prince Amongst Men ($7.50) was being hailed as the winner, Readily Availabull ($8) descended to claim a victory by a neck with Rambeau ($8) a long-head away third.

Sargent said a trip to the Ballarat Cup meeting in the past had sparked his interest in Saturday’s race.

“I thought that I’d like to find a horse and train it up to win it and when he worked well during the week, I thought that this would be a good chance to do it,” Sargent said.

“This race had good prizemoney which gets him into the Magic Millions big race.

“He’ll come back now and spend a week in the paddock. I might take him to the Wyong Magic Millions race or head straight to Queensland.” 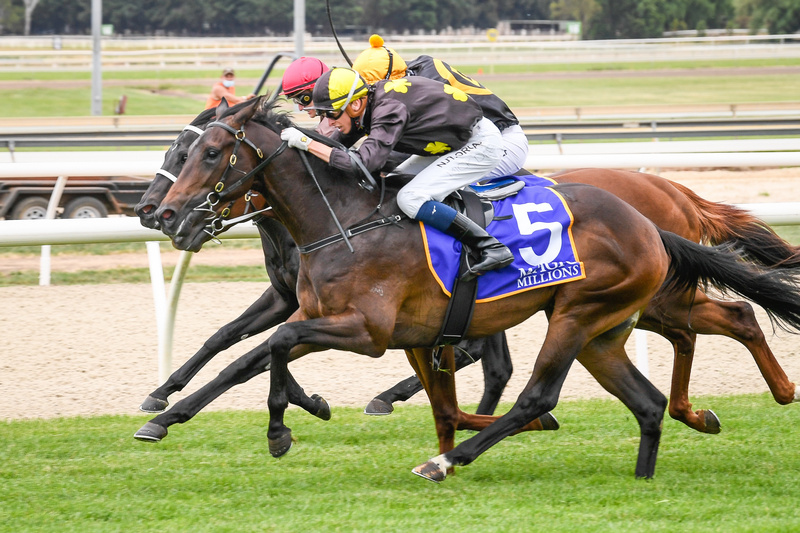 Readily Availabull and Michael Dee come down the outside for the win, picture Racing Photos