The cream of Korea’s speedsters will meet the starter in the second leg of the 2022 Korea Sprint Series in the SROA (Seoul Racecourse Owners’ Association) Chairman’s Sprint (1200M KOR-G3) at Seoul Racecourse on Sunday afternoon.

Raon The Fighter will be looking to return to winning ways after suffering his first career defeat in the first leg of the series, the Busan Ilbo Sprint on April 24th. He will be hot favourite to do so with his conqueror that day, Eoma Eoma, ruled out through a sprained fetlock.

Bursting onto the elite scene with victory over Eoma Eoma in this race last year (when it was held in November due to the pandemic-affected season), Raon The Fighter was sent off a prohibitive favourite in the Busan Ilbo, only to stumble coming out of the gate and then take a heavy bump. Eoma Eoma was able to gain his revenge with Raon The Fighter a gallant 2nd in the circumstances, however, a third match-up will have to wait with Eoma Eoma not having been in work since.

That still leaves a formidable set of rivals. Morfhis won this race two years ago while East Jet is also a Group winner at the 1200M distance. Simjangui Godong won last year’s President’s Cup (2000M KOR-G1) and comes back to the sprinting ranks after two class 1 wins at 2000M this year. Then there is Hit Yegam, a winner of two legs of last year’s Triple Crown, yet also a formidable sprinter in the past.

Other up and comers include Yeongung Louis, Jangsan Clear and Black Musk and despite Eoma Eoma’s absence, Raon The Fighter is going to need to be on his game to return to the top. 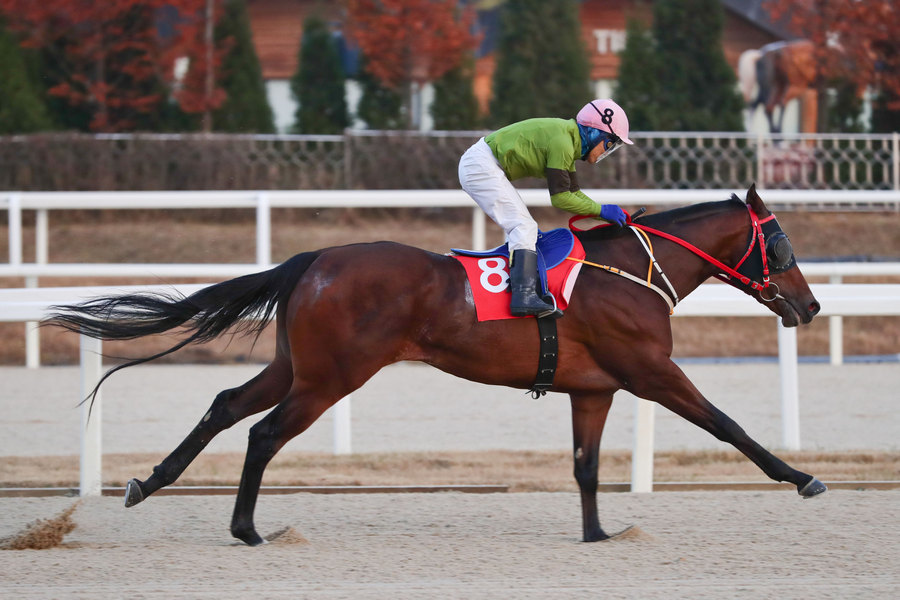 The SROA Chairman’s Sprint is race 8 on an 11-race card at Seoul Racecourse on Sunday - 5.20pm AEST on Sky Racing2. Here is a full run-down of every horse:

The only filly or mare in the race, she was the longest shot on the board in the Busan Ilbo Cup and probably will be again here. Good draw but she probably doesn’t have the early speed to get on the pace nor the late speed to mount a strong challenge at the business end of the race. Lowest rated by some nineteen points.

The 2021 President’s Cup (2000M KOR-G1) winner drops back to this distance for the first time since November 2020. It is a distance he has won at, claiming the Segye Ilbo Cup in January of 2020, just before racing closed down for the pandemic, but is nevertheless a surprising entrant. In his last two starts at 2000M, both of which have been class 1 wins, he has sat on the pace, and he is drawn very nicely to do similar here. Can go close and is a candidate for second-favourite status.

Wins in the KRA Cup Mile and Minister’s Cup along with a narrow 2nd place in the Derby made Hit Yegam (no longer “Heat”) last year’s Champion Three-year-old having been Champion Juvenile the year before, when he won the Breeders’ Cup at this distance. He suffered a surprise defeat to Daemangui Gil on his only start so far this season which was at this distance at class 1 level in Busan on February 27th, but it was probably only intended as a pipe-opener for a horse who has been very sensibly campaigned. He led that day, as he has done in all his starts so far. He has never finished worse than 2nd and while this is his toughest ask, he gets a very good draw to be on pace again and he should be in this a long way.

Burst onto the scene on his only previous visit to Seoul when 3rd behind Eoma Eoma and East Jet on the SBS Sports Sprint in October. It’s fair to say he has mixed his form since then with an excellent win over 1400M at class 1 level in Busan followed by a slightly disappointing 7th of ten in the Busan Ilbo when he bumped with Raon The Fighter at the start and wasn’t much of a factor. Being back at Seoul may galvanize him and the draw is kind. Place line.

A break-out 3rd place in the Busan Ilbo, his first try among the elite. He jumped out well but allowed the speedsters to get on with it up front while he settled in midfield, He made up superb ground, getting up to 3rd with 100M to run and ultimately was only beaten by Eoma Eoma and Raon The Fighter. Two starts back, he beat Black Musk over 1400M at class 1 level. Previously used to lead in his races but in his last four outings, he has settled back in midfield. Big place chance again, once more coming from off the pace.

A comfortable winner over this distance at Class 1 level on April 3rd, he could only manage 8th of eleven on his latest outing just two weeks ago. Previously finished 5th behind Raon The Fighter and Dixie Again. Facing the elite at level weights looks a tough assignment for him and a minor money finish would be a very good result.

The 4th placegetter in this race last November having run 2nd in the SBS Sports Sprint a month earlier. He has raced three times in 2022 with his best coming in the first of those when 2nd to Raon First in the Listed Segye Ilbo Trophy. He was 5th in the Busan Ilbo having led from the gate. Without Eoma Eoma in the adjoining barrier this time he, like some others, may get an easier run of things early and while others may be favoured today, he is a Group race winner – in this race in August 2020 – and a money finish shouldn’t be ruled out.

A big step up for this four-year-old, who has won five of his eight starts, including his latest back on February 26th, that saw his rating reach class 1 level. All his runs so far have been at today’s distance, and he has run consistently fast, if not spectacular times. He has a good start on him and if he can find a forward or handy position, he may surprise a few.

A winner of seven from twelve so far, this is just his second Group race following an unsuccessful spin in the Owners’ Cup over a mile at Busan last autumn when he led but weakened. 1400M is his and he was a very narrow 2nd to Dixie Again at this distance on March 20th before landing his first class 1 win with a gate-to-wire win over the same seven-furlong son April 24th. He was carrying a light weight on both occasions and carrying level weights against the elite won’t be easy here and nor will the draw but expect a bold showing nonetheless.

The defending champion, Raon The Fighter suffered his first defeat in the Busan Ilbo but didn’t lose too much reputation-wise. He stumbled coming out of the gate and then bumped Yeongung Louis, putting him at a disadvantage. He then worked forward and wide instead of taking a sit and continued to go wider as the race progressed. In the circumstances, to be beaten just three-lengths by a horse of the caliber of Eoma Eoma was an enormous run. Eoma Eoma isn’t here today and Raon The Fighter can return to winning ways. This is a horse with who connections should have ambitions beyond Korea.

Winner of the SBS Sports Sprint in July 2020, he ran 3rd in this race in November last year. He was most recently 4th behind Dixie Again and Black Musk when giving both a full 7kg over 1400M on March 20th when, as is his style, he settled towards the back of midfield and then ran on strong. The wide gate is not a problem as he goes best setting up for a late run and while he might not be quite as quick as he was eighteen months ago, he will challenge at the business end.

*In seconds, calculated by an average of the most recent 6 starts regardless of distance