A hectic weekend is looming for Hawkesbury trainer Brad Widdup as he prepares to spread his boutique team between three states.

Improving three-year-old Global Ausbred will spearhead Widdup’s squad when he lines up in the Group 1 Queensland Derby (2400m) at Eagle Farm, while Authentic Jewel heads in the opposite direction for an 1100m assignment at Caulfield. The popular horseman will also have up to four runners in Sydney, led by recent stable acquisition Surreal Step, who is due for a change of fortune in the Taylor Construction Handicap (1100m) at Randwick.

Surreal Step warmed up late for an encouraging third behind Tycoonist and Malkovich in the Hawkesbury Gold Rush (1100m) on resumption, then should have finished much closer when sixth to stablemate Vulpine in the Ortensia Stakes (1100m) at Scone.

The latter was a race of two halves for Widdup, with Vulpine slow to jump before regathering herself to get up in the final bounds, while Surreal Step switched back to the inside to make his run but was stopped in his tracks and only got clear when the race was over.

“When she bombed the start, I was watching him after that and then I saw what happened to him and I thought, ‘oh God’ and I switched back to her,” Widdup said. “His two runs have been excellent without winning and I have been really happy with him since.”

Surreal Step finds himself in another tough race on Saturday with James Cummings dropping Andermatt back in distance for the Randwick assignment after his defeat as an odds-on favourite in the Luskin Star Stakes (1300m).

Calgary Queen is on target to back-up in the Midway Handicap (1200m) after her gallant second to Mariamia at Rosehill last weekend, while the ultra-consistent Queen Bellissimo will chase her sixth win from 11 starts in the final race.

Queen Bellissimo is second-up after just missing when overhauled late by Sacrimony at the stand-alone Hawkesbury meeting, she is proven at the track and distance and handles rain-affected ground. “She is going terrific. Hopefully she can continue that on Saturday,” Widdup said. 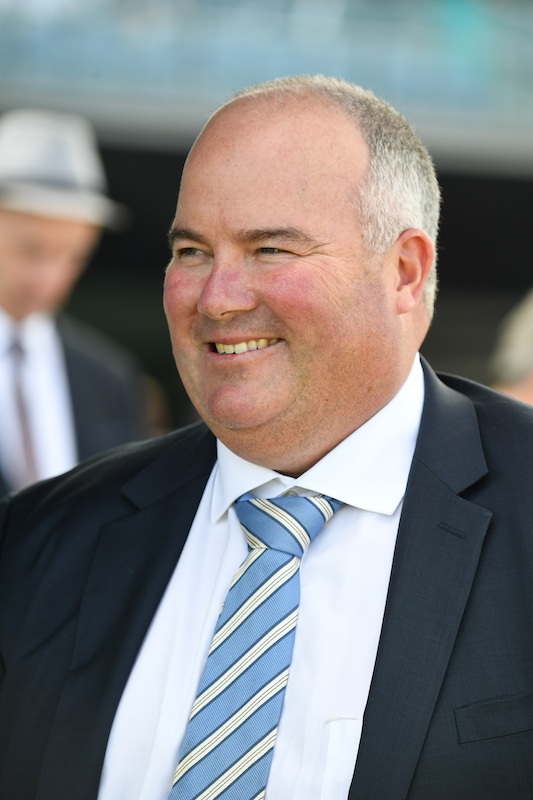 Brad Widdup has a big Saturday ahead (sportpix.com.au)