Purton snaps to a treble at Happy Valley

The hard-fought victory sealed a hat-trick for the unbeaten Caspar Fownes-trained five-year-old.

“They went really hard through the mid-section and he was struggling to keep up but he came through like he was going to win it easily and he hit a flat spot,” Purton said.

“It wasn’t until he heard the other runner coming next to him that he just kept sticking his neck out. He’s obviously got a bit of ticker – he might be suited over a little bit further.”

Purton kicked off the card with a success on Starlot in the Class 5 Niigata Handicap (1200m). That win ensured trainer Paul O’Sullivan continued his hot streak, the New Zealander having landed a treble at Sha Tin on Sunday.

The handler, who now has six wins on the board, has credited the Jockey Club’s Conghua facility for what, compared to past seasons, is a flying start to the campaign. Starlot is another to have benefited: the six-year-old spent the summer there and returned to Sha Tin ahead of his previous start back in September. 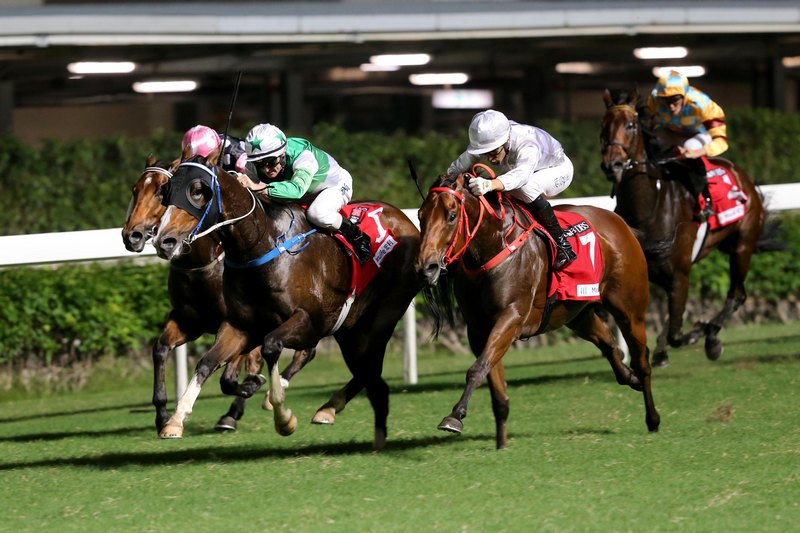 Purton was on the mark again in race four, section two of the Class 4 Nakayama Handicap (1200m). The champion jockey urged another short-priced favourite (1.8) from the Fownes yard, Aurora Pegasus (124lb), to a half-length win over The Abraxas (116lb).

“It’s about time a few horses started hitting the line. I’ve had a few frustrating placings so I’m due for the wheel to spin my way a little bit, it’ll even itself out,” Purton said of his night’s work.

Joao Moreira rode a smart race to win section one of the Class 4 Hanshin Handicap (1650m) on the Frankie Lor-trained Flame Lily, a 17-race maiden before this evening.

“Joao Moreira was the key: the horse is one-paced and he needs a good jockey,” Lor said. “The idea was to lead if he could but he was crossed by some quicker horses from the outside and Joao took the clever decision to sit and that meant he was able to finish off strongly.”

Lor made it two on the night when the Chad Schofield-ridden Flash Famous landed section two of the Class 4 Hanshin Handicap (1650m).

Blake Shinn had to work hard to claim his second Hong Kong win but the rider’s redoubtable drive paid off as All Wongchoy (126lb) edged the Yeung-ridden Precious Sweetie (130lb) in a battling finish to section one of the Class 4 Nakayama Handicap (1200m). The Danny Shum-trained winner was scoring at his second career start.