Glorious Forever (126lb) has a Group 1 pedigree and after an impressive Hong Kong breakthrough last start the British import will attempt to keep on with the tough ascent to that lofty grade when he lines up in Sunday’s Class 2 Hoi Ha Handicap (2000m) at Sha Tin.

Jockey Zac Purton was in the plate for the Archipenko gelding’s four-length cruise in a Class 3 1800m handicap at the track last time out. The man currently with a three-win lead at the top of the jockeys’ premiership is also the regular partner of the four-year-old’s big brother, Time Warp. The Australian ace rode that powerful front-runner to G1 wins in the LONGINES Hong Kong Cup (2000m) and Citi Hong Kong Gold Cup (2000m) earlier this term.

“Their racing styles are very similar,” Purton said at Sha Tin this morning, Friday, 6 July. “They’re both on-pace runners but Time Warp doesn’t have the best action in the world, he doesn’t move that fluently, whereas this fella seems to move a lot better, he’s nicer to ride. Hopefully that means he’ll be a nicer horse!”

Trainer Frankie Lor hopes that, too. The first-season handler, second in the premiership behind his old boss John Size, admitted that his charge is an “exciting” prospect.

“Glorious Forever looked fantastic last time, so we’ll find out if he can go up the grades,” Lor said.

Glorious Forever landed a 10-furlong handicap at his final start in England last year and won at his third attempt in Hong Kong, having been pipped by a nose over 1800m the time before.

“It was a nice effort to win, he put the writing on the wall at his previous start and he was able to back it up,” Purton said. “He felt like he was in a good rhythm going to the line; whether he’s pressured and finds more, I’m not quite sure, but hopefully he doesn’t have to find any more.

“They’re different races, the 1800 (metres) to the 2000 (metres), obviously there’s more pressure going into the first corner but he’s drawn a nice gate (3) and he should be able to get forward again. I’ll just get him in his rhythm and see how it goes. He felt last time like he wasn’t getting tired towards the line, anyway.” 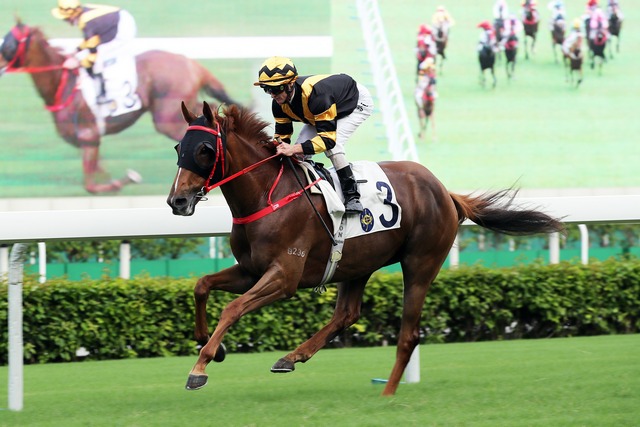 Glorious Forever is not the only progressive type with potential in the eight-strong contest, which carries a purse of HK$1.86 million.

The Size-trained Insayshable (128lb) made plenty of notebooks as well as Joao Moreira’s Derby shortlist when a fine third to subsequent Hong Kong Classic Cup winner Singapore Sling first-up, only to succumb to injury. The Irish import returned from a six-month absence to run a solid second behind Doctor Geoff at Happy Valley a week and a half ago and steps out at Sha Tin for the first time.

“He was a horse that was brought in for the Derby and on his first run at Happy Valley I had him on my list as a Derby ride. Unfortunately, he picked up that injury and had to stop for a little while. I have a very high opinion of him and I have a lot of faith in him - it would be no surprise to see him winning cup races down the road,” Moreira said.

The Brazilian, who is battling Purton in the jockeys’ premiership, believes the step up to 2000m will suit the Rajj four-year-old, a maiden winner at the distance at Leopardstown.

“The farther he goes, the better it is going to be for him,” he said.

Another lightly-raced import with a promising profile is the Tony Cruz-trained Stimulation (129lb), runner-up to Pikachu over 1800m on his Hong Kong debut last month. The Deep Impact gelding landed the G3 Prix des Chenes (1600m) as a juvenile and has won and been G2-placed at 2400m.

“Tony has liked him all the way through, he has a fair share of ability, he’s a horse that is going to take a bit of time and I think you’ll see a better horse next season,” jockey Tommy Berry said.

“He did well on debut, it was a small field, he got back and ran home strongly, so he did what we thought he’d do. It’s going to be a stiffer test on the weekend but I think if he can settle closer he’ll be running on again.”