Zac Purton boosted his championship claims on Wednesday night with a fantastic four-timer at Happy Valley and this Saturday at Sha Tin he is aiming to draw further clear of great rival Joao Moreira with a full book of 10 rides.

Purton rode the last four winners at the Valley, all for trainer Francis Lui, in a sublime performance. But Hong Kong’s reigning champion jockey is not about to rest on his laurels even with a seven-win lead at the top (136-129).

“There’s still a few races left and this weekend is going to be another key meeting for both of us, so we’ll see how that plays out, but if I can come out and ride another three or four winners it puts me in a good spot,” Purton said.

Two or three wins per meeting is a regular occurrence for the pair of three-time champion jockeys, but it was Australian’s fabulous four which hurtled him clear at the top with six meetings left; Moreira though, will only be available for five due to a one-meeting suspension which he will serve on 8 July.

“It was a pivotal moment and every time I beat Joao (Moreira) or he beats me it’s always a two-win swing, effectively, so they add up, and hopefully I can stay on the right side of the winners,” Purton said. 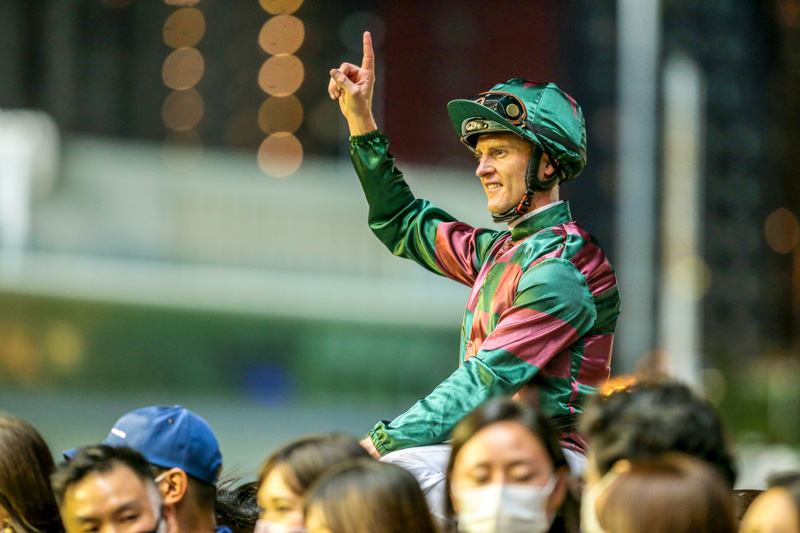 Purton’s full book this Saturday is highlighted by his renewed association with the Danny Shum-trained Happy Fun (127lb) who contests the finale, the Class 2 Lantau Island Handicap (1400m). The Darci Brahma gelding has two wins from 15 starts to his name and is nothing short of consistent with six minor placings among those runs.

“He’s a horse that looks after himself in the mornings and he doesn’t do a lot at trackwork, so he needs to race to get fit, to get the best out of him,” Purton said.

“He’s had a long season and we’re at the end of the season now so you’d expect most horses to be fairly fit but because he’s had that little bit of a break, I feel like he might improve off that last effort. He’s had another trial and I thought that trial was good, he’s a solid chance - he always runs well and I’m sure he’ll do that again.”

The six-year-old will break from gate 10 in the field of 14, which is stacked with quality, featuring only four horses who have not recorded a win this term.

“It all depends on how much speed is in the race - he likes to lead, so we’ll see how much pressure he gets for that position,” Purton said.

The gelding arrived in Hong Kong from New Zealand where he was a maiden winner at Te Rapa.

“It was a good effort, it was only his second start and he improved a lot from his first effort,” Purton said.

“It’s not easy when they go up in distance and also change their racing style, he began well so we took advantage of that and I felt like he was just floating in the straight, then the other horse (Circuit Hassler) challenged him and he’s going to need to do that again,” Purton noted.

The New Zealand-bred four-year-old was handed five points for that win, and again squares off with Circuit Hassler (128lb).

“He’ll be better for the run; unfortunately, we’ve drawn an awkward gate again so we’ll just play it by ear, see how he begins and work the race out as it unfolds,” Purton said.