Private Secretary sprang straight into Four-Year-Old Classic Series consideration with a smart step-out victory last month and Tony Cruz’s charge will aim to up the ante in the Class 2 Lung Kong Handicap (1600m) at Sha Tin on Saturday.

The Kingman colt was a talent on the rise in Britain last year, capping a hat-trick in the Listed Cocked Hat Stakes (2240m) before running a solid fourth to subsequent G1 winner Japan in the G2 King Edward VII Stakes (2392m) at Royal Ascot.

His local debut performance over 1650m at Happy Valley highlighted the well-connected bay’s wellbeing post-import, and suggested the promise he showed for his previous handler John Gosden remains in good shape.

“I was expecting that performance, I’d been planning that race for a long time and everything went according to plan,” Cruz said at Sha Tin this morning, Friday, 10 January.

“Everything’s been straightforward, he’s had no setbacks. He’s a small horse but he has a good engine in him. I’m very happy with him and I think he’ll run a big race on Saturday.”

Private Secretary hails from a top-class family: his dam, Intrigued, had talent enough to place fourth in the G1 Prix Marcel Boussac, while his second dam, Last Second, was a high-class 10-furlong runner and has also produced two-time G1 winner Aussie Rules; the champions Alborada and Albanova also hail from the prolific family. 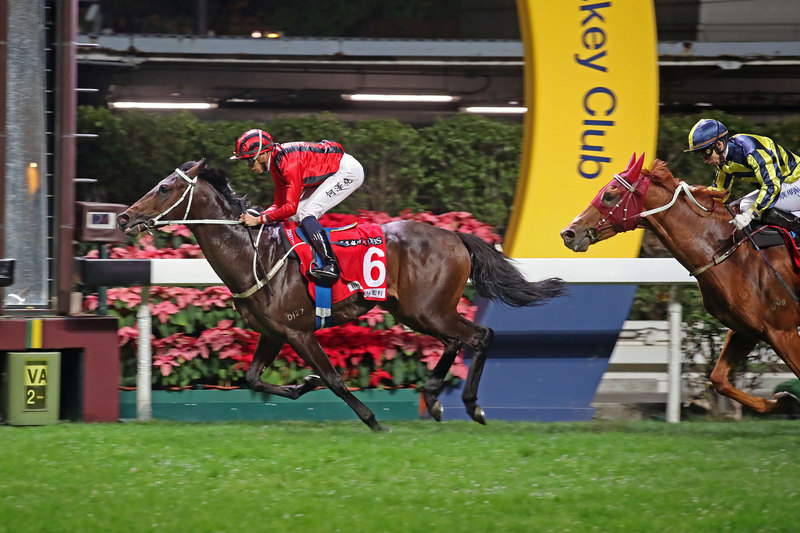 Few horses manage to win in Class 2 at their first Hong Kong start and Private Secretary was raised seven points to a rating of 94 for his victory.

“He has quality, he’s had it from the very beginning,” Cruz said. “We bought him as a Hong Kong Derby (2000m) prospect – he gets 2000 metres no problem but whether he’ll stay a mile and half – that might be a bit far.

“If everything goes well he’ll go into the Classic Mile, then the Hong Kong Classic Cup (1800m) and then into the Derby. He’s still a colt but he’s been very straightforward, no bad behaviour – he’s got a good mind, this horse.”

Champion jockey Zac Purton holds the option to ride the Siu Pak Kwan-owned galloper but sits out Saturday due to suspension. Frenchman Tony Piccone, who debuted at Sha Tin with a win on 1 January, will take the reins instead.

“Zac is suspended so we have Tony Piccone and we’ll see what happens as to who rides him in the Classic Mile – a lot will depend on how he runs tomorrow. Tony has done very well with the few horses I’ve put him on.”

Pieces of the Four-Year-Old Classic Series puzzle are starting to fall into place with the first leg, the Hong Kong Classic Mile (1600m), a little more than two weeks away. Two of Private Secretary’s 13 rivals also have Series ambitions.

The chestnut bagged two G1 wins in Brazil and was denied the Triple Crown there when disqualified from first place in the middle leg, the G1 Jockey Club de Sao Paulo (2000m) – he bounced back from that with an easy win in the G1 Derby Paulista (2400m).

Alexis Badel will slip into the gelding’s irons for the first time in the mile contest.

“His last run was a strong run because the early pace was quite good and he kept on well even though he had to cover a bit of ground outside. He’s still improving so it’s pretty positive,” the French rider said.

“It takes a bit of time for new horses to adapt to the Hong Kong style and some of them do it very fast while others can take two or three races, but he’s in good form so hopefully he’s coming at the right time.”

The Caspar Fownes-trained Columbus County (119lb) was a running-on fourth on debut behind a horse expected to be a leading Hong Kong Classic Mile protagonist, Golden Sixty. That was back in October and the New Zealand import – third in the G2 Waikato Guineas (2000m) – has not raced since.

“His run was very good first-up, he didn't have the best of starts and he was able to sneak through on the inside to run a good fourth so I was impressed with that run,” jockey Joao Moreira said of the Classic Series hopeful.

“For whatever reason, Caspar gave him a nice space between races – three weeks ago I trialled him and he trialled only fair but the second time I sat on him for a trial he trialled much better, he put himself forward and I was extremely happy with that.

“He seems a talented horse – a horse still in the making.”

The contest is the last on the 10-race card and features the Ricky Yiu-trained Preciousship (123lb), a two-time winner this term and most recently runner-up to another chief Classic Series player, More Than This.