Journeyman jockey Craig Newitt was back in very familiar surroundings when steering home Immortal Love (by Snitzel) in the $100,000, VRC Tom Melbourne Trophy (1400m) at Flemington in Melbourne.

Back riding for his former 'boss' Mick Price on a temporary basis following the suspension of racing in Tasmania, Newitt was seen at his forceful best when putting the progressive 2-year-old on the pace soon after settling in the 1400m event, before setting sail for home at the top of the lengthy Flemington straight.

Despite encountering the disadvantage of racing alone for the majority of Flemington's extended run-in, Immortal Love never looked likely to stop and made light work of holding off each and every one of his eight rivals.

Sent to post a $2.50 favourite, Khoekhoe (by Turffontein) turned in a solid enough performance to claim second, a length clear of Indictment (by Street Boss) in third.

One of the leading Victorian jockeys of his time when permanently associated with the Mick Price stable, Newitt more recently returned to his Tasmanian homeland to ply his trade. Thus, Newitt's win aboard Immortal Love, trained by Price in partnership by Mick Kent Jnr, was a throwback to a time when Flemington winners came think and fast for one of the most successful jockey-trainer associations seen over the past dozen-or-so years. 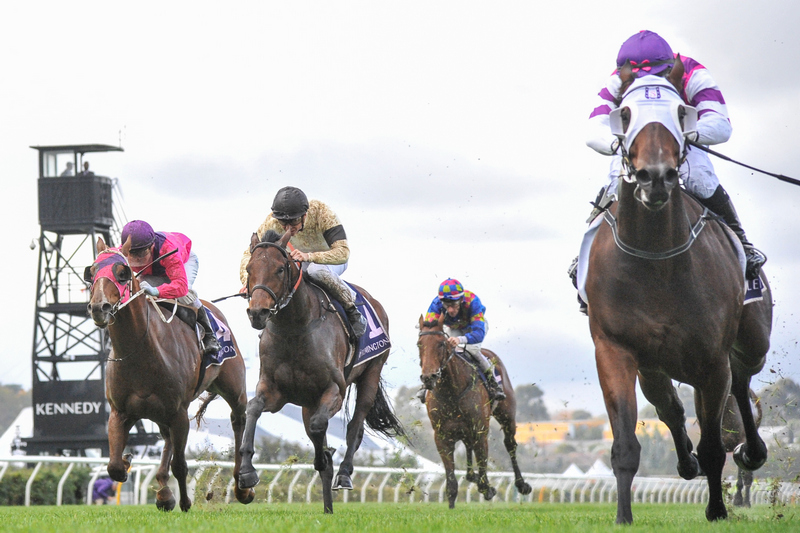 In post-race interviews, Price was keen to heap praise on Immortal Love's breeder-owner, as well as remark on the sight of Newitt again riding one of his charges to victory.

“This is one of Peter Creighton home-breds,” Price remarked in regards to the former.

“The best thing he did, Peter, was to geld it even though it had a good pedigree. One thing about him [Creighton], if you ask him to do something he does it, which is why he is here today.

“He [Immortal Love] wasn’t going to be much good as a colt, this horse. But I’m very happy for him and I suppose that today is one of those days that if they’re going to handle it [the heavy ground], then they’ll win. If they don’t, they’ll be out the back. Fantastic to see we’ve got a wet tracker.”

In terms of the stable's success in tandem with Newitt, Price admitted: “It’s good to see him back. He was there this morning at 5am. He rode one after another for a couple of hours. He’s going to all the meetings and riding well.

“I did say 'don’t be in front at the top of the straight' — not sure if he heard that or not. That’s him. He’s an aggressive rider and gets the best out of them. It suits my horses, I guess.”

Winning rider Craig Newitt saved his views for the performance of the winner.

“He loves the wet,” observed Newitt. “He gave me a really good feeling at his first start; that he would measure up in town.

Immortal Love won by no fewer than three-and-a-half lengths by one length.

Asked for a comment on the performance of the favourite Khoekhoe, trainer Matt Cumani stated: “It was a good run. He was a bit far back, but the winner handled the conditions best. I thought he’d go well in the heavy but it took away his speed. I think he’ll be a better three-year-old.”