#1 Turbo Power won nicely on debut and he looks well placed to repeat that effort here against his own age group. #5 Hk Dragon closed off nicely behind Turbo Power on debut. He’s a factor with natural improvement. #9 Smart Idea should roll forward and get every chance close to the speed. #2 Chiu Chow Warrior is next best. He has claims.

#6 Ka Ying Spirit has caught the eye at the trials and he looks set to run a big race on debut, especially with Zac Purton engaged. Zac Purton and David Hayes combined for a double at the midweek fixture and their good fortune can roll on here. #14 Majestic Conqueror will roll forward and try to pinch this. He’ll look the winner at some stage. #1 Dragon Baby won well on debut. He’s been tasked with more weight here but with the right run he looks like a major player. #3 Seven Heavens is a factor in his spot. Don’t discount.

#6 Mcmunigal gets a handy seven-pound claim thanks to the booking of apprentice Jerry Chau. Chances are he rolls forward and from the front gives himself every opportunity. He’s a winner off this mark and another here would not surprise. #10 Sky Gem is consistent in his spot. He can figure with the right run. #4 Jimmu is yet to win. Still though, with the right run he is capable of testing this bunch as he done in the past over these distances. #13 Joy N Fun Legend clocked a career-best runner-up effort last start. Suspect he can continue to improve here.

#9 Tronic Mighty has caught the eye at the trials. He looks set to make an immediate impact on debut and his chances are aided by the good gate and booking of Chad Schofield. #3 Monster Kaka is closing in on a first Hong Kong win. Zac Purton retains the ride which suits and his fast-closing latest effort commands respect here, especially as he steps away from gate two of 14. #2 Jade Phoenix is consistent without winning. He can figure once again. #4 Rhapsody draws well and is slowly returning to form. Joao Moreira takes the reins which bears close watching.

#3 Ultra Express is a lightly raced talent. He draws well for Joao Moreira and from there he maps to get the run of the race. #1 Dandy Years also draws well and has claims from the inside gate. He’s been racing very well and it wouldn’t surprise to see him get himself back into the winners circle. #6 Robot Warrior lacks experience but does get the services of Zac Purton. He’s doing a lot right and with the right run he is capable of testing this bunch. #2 Leading Fortune is next best. He only needs to offset the awkward gate.

#2 Master Hero is doing everything right except win. Still, he has ability and the seven-pound claim from apprentice Jerry Chau sees him dip sharply in weight. #4 Vukan draws well and is capable in his spot. He trialled well recently and should have taken plenty of improvement from that recent hit-out. #1 A La King won nicely on debut. He’s not without a hope of bouncing back to his best. #6 Gracylove only needs to overcome the awkward gate to be competitive.

#1 Columbus County has the runs on the board and the form over this trip to take out this contest. The only knock is whether he can shoulder top-weight against a field of this quality, including last year’s winner Chefano and 2019’s winner Ho Ho Khan. That horse, #7 Ho Ho Khan slots in for second. He’s racing well and has no doubt been set for this race. He draws well and should be fighting out the finish. #6 Panfield finished third in the Hong Kong Derby last month. He’ll relish the added distance and his latest trial was nothing short of impressive. #10 Charity Fun is another who will relish getting out in trip. Just a question whether he can continue his ascent through the grades so rapidly, having only had five starts in Hong Kong.

#11 Excellent Chariot returns to a favourable distance. He slots in light and gets his chance in Class 3 with no weight on his back. #4 Hurry Hurry Gain scored impressively last time out. He had a tough trip that day but still managed to score a win full of merit at his Class 3 debut. Suspect he can figure once again and the booking of Zac Purton again bears close watching. #7 Sky Show is racing well with three top-three finishes from his past three runs. #3 Storm Warnings draws well and is closing in on a first Hong Kong win.

#14 Flying Mighty slots in light and gets his chance. He’s gone close on a number of occasions and with his ability, he’s worth a play at odds. #3 Looking Great is looking for back-to-back wins. He relished the step up in trip last start and he’s a threat with Joao Moreira retaining the ride. #2 California Ten draws well and is lightly raced. He’s open to further improvement. #6 Beauty Fit has the class but isn’t exactly firing in Hong Kong as he did in Australia. He has issues getting out of the gates and this could continue to stall his career here if he walks out again.

#1 Trillion Win pushed Courier Wonder to within half a length last start and if he repeats that effort here than he should be able to get the job done. This form is by far and away the best reference in the race and the booking of Zac Purton should ensure he gets every opportunity. #8 Biz Power has narrowly missed a number of times but still, he has shown considerable ability at times. He’s a factor. #4 Tornado Twist is in the right grade. The booking of Vincent Ho suggests he’s ready to peak and from gate three he should get every chance. #5 Juneau Park is next best.

#1 Fantastic Treasure is a star in the making with three wins from three starts. He’s looking to extend that run to a quartet of triumphs and from gate two, again in Class 3, he looks capable of doing so. #2 Uncle Steve is looking to snap consecutive runner-up efforts. The wide gate makes things tricky but he’s racing with plenty of merit at present and the seven-pound claim enhances his chances. He’s worth supporting on an each way basis in this contest as he is a winner in the grade above. #6 All For South should look the winner at some stage. Expect he rolls forward and tries to pinch this. #9 Kasi Farasi is competitive in his spot. 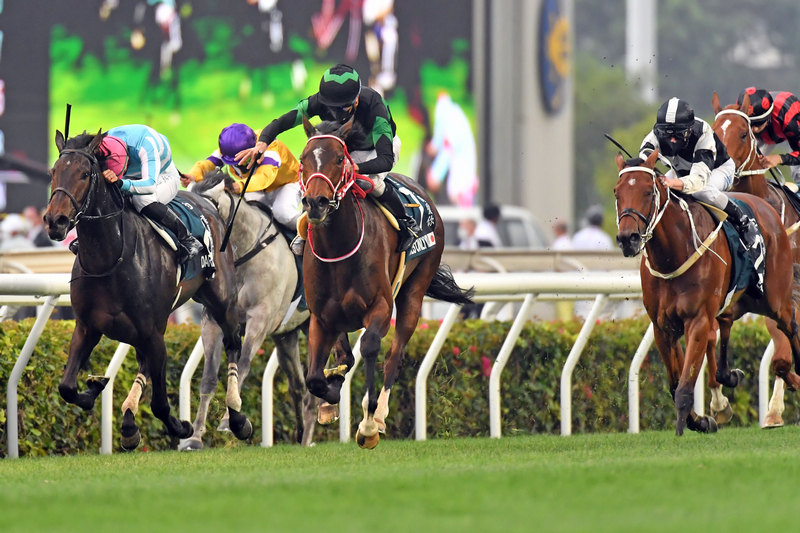