#7 Dynamic Eagle is racing well and has shown that he is ready for a step up in trip. He’s been competitive over 2000m before and this contest appears no exception, especially as he steps away from a favourable draw. #10 Exaltation is crying out for further. He can figure with the right run now as he gets up to a suitable trip. #5 King’s Race is the likely leader. He can roll forward and play catch me if you can. #12 Sky Gem narrowly missed over this course and distance two starts ago before struggling at his latest. He won’t be too far away.

#8 Harmony N Blessed was backed into favouritism last time out but was subsequently withdrawn at the gates after breaking through the front. He’s since trialled well, and with a positive ride from gate four, he appears capable of making his debut a winning one. #2 Everyone’s Delight is in-form and on the up. The awkward draw makes life hard but, he does appear to have the ability offset this, especially with Zac Purton’s services engaged. #12 Gallant Crown mixes his form but the ability is there. #1 Classic Posh gets the claim and should be in the thick of things.

#2 Golden Sixty is shooting for his ninth consecutive win and second at G2 level after clean-sweeping last season’s Four-Year-Old Classic Series. He’s a star and this contest is his to lose. #7 Mighty Giant is the main challenger having won his last five races, all in tenacious fashion. He’ll look the winner at some point. #1 Southern Legend has a weight-bearing task but still, he has the class as a G1 winner previously. #3 Ka Ying Star will roll forward to lead. He’s tough, but this is difficult.

#10 Super Ten steps out of Griffin grade. He has considerable talent and his latest trial indicates that he is on an upward trajectory now with his maiden campaign behind him. #7 Chairman Lo doesn’t win out of turn but on his day, he is rather good. Joao Moreira hops up now following a number of mediocre runs and it would not shock at all to see him jump out of the ground. #4 Galactic is a lightly raced talent who did, get off the mark nicely two starts ago. #2 Triple Triple is next best.

#5 Rattan put in an encouraging performance from the rear last time out and if, he gets a race run to suit, he can finish off strongly in what appears to be a rather open edition of the Jockey Club Sprint. #3 Voyage Warrior is open to further improvement following his first-up effort. He is proven in this grade as a G2 winner and with even luck, he should be around the mark. #7 Computer Patch is on the up and he rates as a leading player following his close-up miss last time out in the G2 Premier Bowl to Wishful Thinker. He’s racing well but will need to step up back to level weights. #1 Hot King Prawn will need to improve following his first-up run which looked below par.

#12 Enrichment slots in light with only 113lb on his back, and as well, gets the services of the in-form Vagner Borges. He went close on a number of occasions last term and with a positive ride on Sunday, settling close to the speed, he could take this out. #4 Lakeshore Eagle could only manage sixth first-up this term. Still, he is a winner in Class 2 previously and from the inside gate he should get his chance to bounce back. #7 Packing Waltham closed nicely for fifth first-up at the Valley. He’s worth taking a chance on. #11 Winning Delight has the ability but his task isn’t made easy from the widest draw.

#3 Furore grabbed the G3 Sa Sa Ladies’ Purse over 1800m last time out and he looks to be now, on the right track to recapturing his best following an extended stint at Conghua. #1 Exultant is Hong Kong’s star stayer and he returned an excellent first-up effort to finish second to Furore. Still, his current-best is seen over further and as well, this isn’t his target race, so he may not yet be fully wound-up especially as he does like to grind his rivals into submission. #8 Columbus County is looking for his third consecutive win. He won well first-up and off that, he does appear capable of making the step up in class to G2 company. #2 Time Warp will look the winner for a long way. He’s in the mix, as his front-running racing pattern always affords ensures him to be a major player.

#11 Biz Power was luckless last start and with that, and his first-up run behind him, he does appear ready to finally go on with it. He’s a talent and the retention of Joao Moreira commands respect. #4 Tornado Twist can return to form down in Class 3, even though his first-up run was only fair. He’s a classy horse on his day and it wouldn’t surprise to see him jump back into form. #6 Winning For All is on the up and deserves respect following a close-up second last time out. #9 Mighty Valor will look the winner for a long way, but will have to do so no up in grade.

#4 Equaletta Blitz performed well on debut and off that, is open to further improvement. His Australian form was sound and the added furlong on offer here only enhances his claims. #2 Circuit Six was a G3 winner pre-import in Australia and he to, performed well on debut. Zac Purton takes over now and he too should relish the extra 200m. #7 The Hulk has placed in his last two starts from the inside draw this time, he should get every chance. #3 Lucky Patch won well on debut, albeit on the dirt and off that he bears close watching, though this will be a step up in grade.

#10 Winning Dreamer is looking for his fifth, unbeaten victory and he is capable of getting it here, especially from gate one. He hasn’t reached his ceiling yet and although this is tough, he is the one to beat. #4 California Rad burst clear for an impressive win last time out. His consistency holds him in good stead for this. #2 Victoriam struggled last time but has since, put in an eye-catching trial at Conghua. #11 All In Mind can bounce back if he does, he deserves respect. 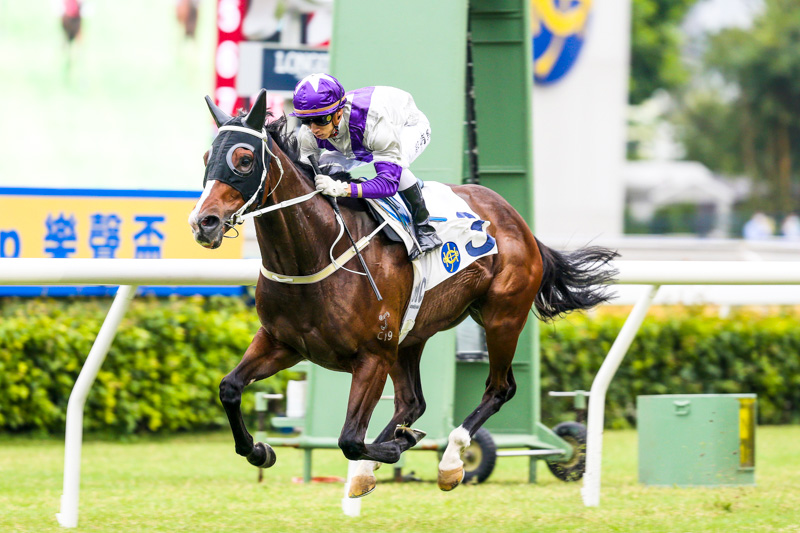