#5 All You Know is a two-time course and distance winner who has drawn favourably for this contest. He’s returned to a winnable mark after scoring on a similar figure in November, 2018. #3 Shadow Breaker is the likely leader who on his day, can prove difficult to reel in. #2 Focus is a classy on-pace galloper who will afford himself every opportunity close to the speed. He races well fresh. #6 Perfect To Play has had the benefit of the one run already this season. Strong booking of Zac Purton suggests that he is ready to fire.

#2 Mig Energy is ready to win. He’s steadily improved in each of his seven Hong Kong starts and the retention of Zac Purton indicates that he’s close to breaking through. #4 Flying On The Turf mixed his form last season but did show glimpses of ability. His latest trial caught the eye and he appears forward enough to be competitive first-up. #5 The Runner is a two-time course and distance winner. It wouldn’t be a shock to see him fight out the finish for a third here. #7 Jolly Good Heart was plain in his first two Hong Kong starts. A recent trial at Conghua suggests that he has improved between seasons and off that, he is worth including.

#4 Smart Thinker caught the eye at the trials for his new handler, Dennis Yip. He appears forward enough to win first-up and the booking of Zac Purton only enhances his chances. #5 The One put in a mediocre trial but he is a much better commodity than that. He’s in Class 5 now and deserves his chance after descending all-the-way down from the middle of Class 3. #8 Flying Monkey has had the benefit of the one run already this season where he finished third. He bears close watching although the wide draw does make life difficult. #12 Tigerlad is next best with no weight and the good gate.

#12 Virtus Star is still winless across 19 starts. He arrived on a mark of 52 in late 2018 and now, races off a career-low 20. He’s drawn to get a soft run throughout which should see him with his chance over the closing stages. #3 V Chevaliers is an improving on-pace runner who steps out for the first time for his new handler, Manfred Man. Strong booking of Joao Moreira bears close watching. #1 Joy Master is a winner already this term. He remains in Class 5 which suits and is aided by the services of reigning champion jockey Zac Purton. #10 Royal Chocolate is a winless seven-year-old. He put in an improved effort first-up and it wouldn’t shock to his progress further here.

#6 Lightning Steed can find the front here in a tricky contest and from there, prove tough to reel in. He’s race-fit coming into this second-up and from the inside draw he maps to do next to work in the run. #2 Jolly Honour was a two-time course and distance winner last season. He bears close watching off the back of a strong trial. #10 London Luckystar is unlucky not to already be a winner. Admittedly his best performances have come on the dirt but still, he has been very competitive over this course and distance previously. #4 Heavenly Thought is a tough on-pace galloper who recorded six top-three finishes last season and one win. He’ll be in the thick of things.

#11 Jade Theatre hasn’t won since late 2018 but is a three-time course and distance winner. He’s now at a career-low mark of 45 and with a soft run from gate one, he shapes as the one to beat. #4 Very Rich Man is the one who is going to be in front him, leading the field. He’ll do a bit of work early from the draw but is capable of testing this bunch. #7 Hercules is much better than his record suggests. The booking of Zac Purton warrants respect now although he is going to do a bit of work from gate 10. A win is nearing for #10 Incanto Prepared. He’ll be thereabouts for Joao Moreira and John Size.

#3 Sell My Sole has done exceptionally well across his first three starts in Hong Kong to record two runner-up efforts. He’s ready to win and he should have his chance here from the favourable draw. #4 Compassion Star won first-up last season. He’s trying to do the same again here although this task is much tougher now as he resumes in Class 4 instead of Class 5. Still, the draw is ideal and he should be competitive. #7 Split Of A Second gets a handy 10 pound’s taken off his back thanks to apprentice Jerry Chau’s claim. He’s consistent and shouldn’t discounted on his day. #9 Daily Beauty has been working alongside both Sky Field and Aethero in trackwork. He bears close watching first-up from a break with Zac Purton engaged.

#8 Eternal Harvest is on-the-up. He rates strongly off the back of his latest win and from the favourable draw, he should get every chance, especially off the back of an impressive trial performance. #3 Green Aeon grabbed fourth on debut as a well supported 4.9 chance. He’s first-up here following an impressive trial at Conghua. Leading player. The last time Zac Purton rode #2 Saul’s Special he won and the pair reunite again here. Still, he will have to do it with 133 pounds on his back which is never easy against a classy field such as this. #11 Nextmodel grabbed second first-up this season and now returns in the hope of going one better here. Chances are he goes around a decent price and if so, he is worth a small each-way play. 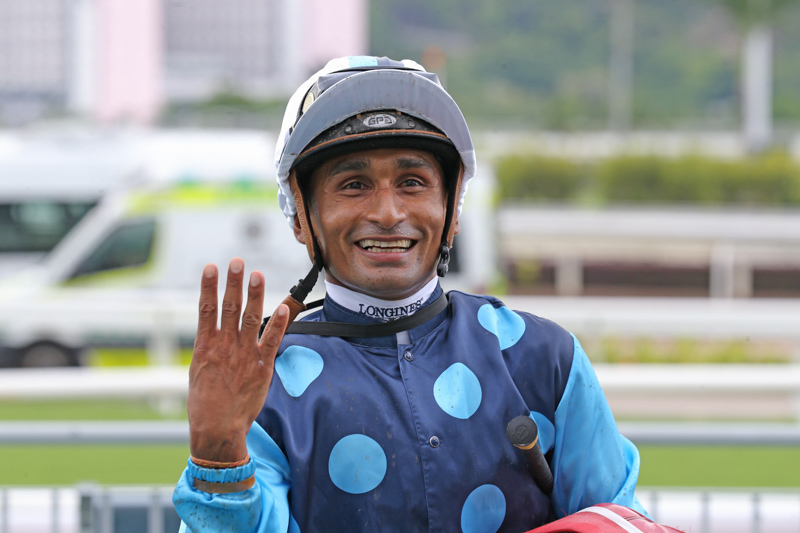