Preview and form for the meeting at Happy Valley on Wednesday night featuring the Group 3 January Cup (1800m). Selections by Andrew Hawkins.

#5 Doctors Delight ran nicely at his first start for Jimmy Ting last time out. He looks set to break through shortly and he should get every chance here. #1 Enjoyable Success backs up after a poor run over an unsuitable 1400m at Sha Tin last time out. This might still prove too short but the Happy Valley 1650m holds a few positives for him and he can run a better race. #4 Kwaichung Brothers has to contend with a wide gate again but he sprinted well to score last time after going back from a similar draw and there's no reason he can't repeat again. #8 Showing Character is a place chance, even if he'd be better over shorter than the 1650m.

#1 Strathallan still looks to have plenty of upside, having broken through for a nice win over the Sha Tin 1000m two starts ago before sticking on OK over 1200m last time out. The Happy Valley 1000m should suit him, particularly if he can either set the pace or sit just off the lead, and he shapes as the one to beat. #4 Lightning Steed should be suited returning to 1000m with Zac Purton jumping aboard. He appears the main danger. #8 Multimax has no weight on his back. He is likely to get out and lead and he’ll be tough to rough down. #11 Striking Mr C is the next best.

#8 Happy Cooperation ran a better race last time out. He hasn’t been the same horse in recent seasons but he’s the type who could bob up here at a nice price. #9 Super Lucky, like his owner mate Super Lucky, is likely to go off as favourite at his first run for Caspar Fownes. He’s a player but he’s worth opposing if he’s too short. #1 Split Of A Second has won his last two starts impressively. He should get a cosy run midfield and he can defy the rise in weight to figure again. #5 Jimson The Dragon ran well enough on debut and shouldn’t be dismissed here.

#10 Special Stars couldn’t have been much more impressive two starts back, swooping from beyond midfield under Irishman Colin Keane to score. He was sent off at a very short quote last time out, but could not reel in Thou Shall Sing. It was enough though to push him up into Class 3 and he strikes a race lacking depth with a feather weight. He’s the one to beat. #6 California Gungho had some big wraps on him from France, where he was named Less Pire, but so far he has failed to meet those expectations. However, he has shown signs of life at his last two starts, so a better effort here wouldn’t surprise. #7 Most Beautiful started the season strongly with two wins in September. He’s drawn to figure again in this spot. #2 E-Super is always a tough nut to crack over this course and distance and should be hard to run down on the speed.

#9 Happy Warrior had absolutely no luck last time out, striking trouble at a crucial stage before flying home to just finish a neck behind Polymer Luck. It’s clear a win is near and he should be mighty hard to topple in this spot. #7 Chaparral Star has been very consistent since getting up in trip. He might be on his mark but he keeps running well and, with Zac Purton jumping aboard, he deserves respect. #1 Jolly Convergence gets down to Class 4 for the first time in his Hong Kong career at start 29. He has never stepped out to this trip before, but it looks an interesting move and he’s one worth keeping safe. #5 Little Island struggles to put two together, finishing 11th at the start after both previous Hong Kong wins (although up in grade). That said, he maps well and he can’t be overlooked.

The sole stakes race of the season at Happy Valley has drawn together a competitive field featuring four Group 1 winners. #5 Northern Superstar arrived in Hong Kong as the highest-rated import of the last decade. He was a dual G1 winner in South Africa when named Edict Of Nantes, winning both the Cape Derby and the Daily News 2000. He hadn’t raced in almost a year when a first-up sixth to Simply Brilliant over 1600m before demonstrating his inherent talent with a fifth in the Hong Kong Cup behind Glorious Forever last time out. He’s still got improvement to come, but with only 114 pounds on his back here, he’s a major player. #6 Simply Brilliant hasn’t raced since winning that 1600m Class 1, the Chevalier Cup, back in November. He steps up to 1800m for the first time, but it appears a trip that should suit and, with no weight to carry, he’s a leading contender. #2 Eagle Way won this race last year as top-weight. His form this year has been far better than last year, when he was battling a number of health issues, and he should be given plenty of respect. Next best are two horses that are unbeaten over the course and distance: Time Warp and Gold Mount. Despite the weight, the slight preference is for #1 Time Warp given that he’ll be out and rolling on the speed.

#2 My Ally has been improving with every start since getting down to Class 3, just falling short last time out. He’d shown his ability with a placing behind Hot King Prawn last season and, off his current rating, he only needs a little bit of luck to figure. #1 Perfect Glory ran a poor race last time out at his Sha Tin debut. However, he was drawn wide and just had a torrid trip, so it’s best forgiven. He should enjoy every chance under Zac Purton here from the inside gate and so he must be considered. #6 Har Har Heart should be around the mark somewhere with even luck. #5 Irish Vega hasn’t shown much in his five Hong Kong starts to date, often proving slow at the start and not doing much from there. That said, he’s getting to a mark where he can improve at any time. He’s worth including in all exotics.

#5 Country Star ran well at Sha Tin on New Year’s Day, finishing second to fellow three-year-old Regency Legend, who looks every bit a Group horse in the making. There were some nice types in behind, too, so it looks a strong form reference for this event. He’s going to be tough to beat. #7 Storm Signal is racing well this season, proving a model of consistency. He should enjoy every chance form the inside gate and he deserves respect. #4 Super Hoppy has lost his way after an early-season victory. He returns off a freshen-up and, as a three-time course and distance winner, he can’t be overlooked. #1 Super Turbo has plenty of weight but he’s likely to be flying late from a long way back. 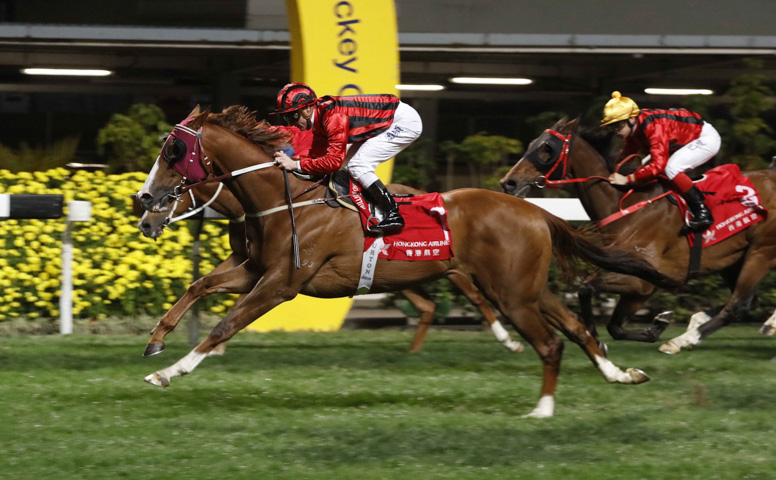