Preview and form for the meeting at Happy Valley on Wednesday night. Selections by Andrew Hawkins.

#3 Money Winner has been out of form at his last couple of starts but he had been looming as a likely winner before that. Perhaps the drop into Class 5 can prove the catalyst for him to break through. #2 Letsgofree returns to Class 5 as well, also getting the step up in trip. Joao Moreira jumps aboard once again and he deserves respect. #1 Glory Star is a three-time winner in the grade, also placing on three occasions from nine Class 5 starts. He must be considered. #9 Telecom Titan disappointed last start but the step up to 1650m could suit and he does get jockeys’ championship leader Zac Purton aboard for the first time.

#2 Mr Picasso has far more talent than his current rating of 60 suggests. Unfortunately, he also has plenty of issues and that means that he doesn’t often produce his best. If he can return to his best form, he’s right in the mix in this spot. #12 Top Strike had shown very little before last start, when he stuck on for third over this course and distance. Almond Lee needs two more winners before the end of the term to retain his trainers’ licence and this appears one of his better hopes to add to his tally. #9 Diamond Legend returns to the Happy Valley 1200m where he won earlier this season. From the inside gate, he could get into the finish. #4 Jolly Bountiful charged late to win last time out. It’s a big ask for him to go back-to-back, but he’s not without a hope.

#2 Mr Right is a five-time winner in this grade from 12 starts. In the last two seasons, he has made a habit of winning with the drop into Class 4, scoring three times from three attempts under the same conditions as he faces here. He should be able to make it four this time around. #1 Lamarosa has his second start in the grade. The return to 1000m should prove a positive and, from a good draw with Zac Purton aboard, he should be hard to beat. #5 Flying Monkey is racing well enough to figure in this spot. #8 Fortune Anthem makes his debut here. He has trialled well and, despite gate 12, he could run a bold race at his first start.

#2 Sichuan Boss doesn’t win out of turn, but he appears to have another win in him off his last run. Joao Moreira is aboard again and he should be hard to beat. #2 Go Go Win should press forward from gate 10. He almost won last time out, albeit with Victor Wong and his 10-pound claim, and it won’t take much for him to win again with Karis Teetan aboard this time out. #11 Good Choice Ahead has disappointed in two runs since winning down in grade last time out. He usually runs well over this course and distance and he should be in the mix. #8 Charity Wings gets Zac Purton aboard and he’s a chance again.

#9 McQueen led over 2200m last time out, only finding Super Chic too good. The step back to 1800m should suit and he should have every chance from gate two. #1 Multi Facets missed an intended start two weeks ago. That came on the back of an impressive win in late May and a good effort in early June. The 1800m should prove no issue and, with a good draw, he should be around the mark again. #8 Har Har Heart has a bad draw and he might be on his mark but he shouldn’t be too far away. #4 Sky Melody ran home strongly last time out. He shouldn’t be as far away from the good draw and he should be in contention.

#5 Storm Signal has shown hints of talent in his 13 Hong Kong starts but he has been unable to break through. If he is able to land either on the speed or right behind the leaders, he can score his first victory in Hong Kong. #12 Nice Fandango has a good draw here. He should lead and he will be the one they all have to run down. #10 General Iron is racing well and he deserves respect. #2 Healthy Luck is another racing in good heart and it won’t take much for him to figure yet again.

#7 Super Turbo finished second in this race last year, only finding Kranji Mile winner Southern Legend – who is now rated 35 points higher – too good. He’s been playing catch-up after missing most of the term through injury, but he is talented on his day and, if he gets a race run to suit, he can finish over the top of these. #8 Solomon's Bay, a Listed winner at Epsom last year, has been good in two Hong Kong runs to date. Joao Moreira jumps aboard for the first time and he looks hard to beat. #6 Gunnison, ridden to victory by Moreira two starts back, now gets Karis Teetan in the saddle. He has drawn well and the return to Happy Valley should suit. He’s a chance again. #4 Fortune Booth is racing well and he will be around the mark.

#2 Starlight has been racing well enough without winning. Zac Purton jumps aboard once more, having won two races aboard the Red Element five-year-old earlier in the season, and he should be hard to beat. #4 Fantastic Feeling is honest and rarely runs a bad race. He’s got a good draw and he should have every chance. #9 High Five has been returning to form in recent starts. It won’t take much for him to gain a victory here. #5 Best Step has looked on his mark after winning at the start of the season. He is back near his winning mark and he is not without a hope.

Click on the HKJC form guide banner for Racingandsports.com.au form and select race. 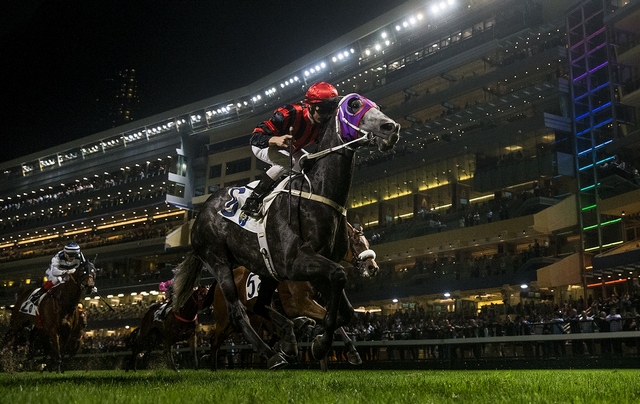