The 2020-21 Victorian racing season was recognised on Sunday evening with the 2021 Victorian Racing Awards presented via a special broadcast on Racing.com after COVID restrictions prevented the scheduled event.

Jockeys Jamie Kah, Steven Pateman and apprentice Will Price were among the big winners, while the powerful training combination of Ciaron Maher and David Eustace capped a memorable season by claiming their inaugural Fred Hoysted Medal.

Trainer Chris Waller’s dominance of the Victorian Racehorse of the Year title also continued with Verry Elleegant’s coronation meaning the trainer has now prepared the winner of the award for five consecutive seasons after Nature Strip (2020) and Winx (2017-19) were previously honoured.

Verry Elleegant enjoyed a superb 2020 Victorian Spring Racing Carnival with back-to-back Group 1 wins in the TAB Turnbull Stakes (2000m) and the Carlton Draught Caulfield Cup (2400m). She polled a total of 100 votes to finish 47 clear of Arcadia Queen (53), with Russian Camelot and Twilight Payment tied for third on 15 votes.

Kah became the first female rider to win the Scobie Breasley Medal in its 26-year history, capping a breakthrough season in which she set a new Victorian metropolitan record with 105 wins.

The Scobie Breasley Medal, named in honour of the first inductee into the Australian Racing Hall of Fame, recognises riding excellence at Victorian metropolitan race meetings with votes awarded at each by Racing Victoria (RV) Stewards on a 3-2-1 basis for the best ride of the day.

As well as the Scobie Breasley Medal and her maiden Victorian Metropolitan Jockeys’ Premiership, 25-year-old Kah also took home the Victorian Jockeys Association (VJA) Most Valuable Jockey Award, which is voted on by all Victorian riders.

Young gun Price was another big winner tonight, adding the VJA Rising Star Award to the two premierships he claimed as the leading apprentice jockey at both state and metropolitan level, where he piloted 73 and 47 winners respectively.

It is the second successive year that 21-year-old Price has scooped the VJA Rising Star Award, which is voted on by fellow riders and recognises the most talented young hoop in the Victorian jockeys’ room.

Another rider in familiar territory on awards night was Pateman, who claimed his ninth Tommy Corrigan Medal as the leading jumps jockey in Victoria and South Australia, albeit his first since collecting his eighth award in 2015.

With votes cast at each jumps meeting by RV and Racing SA Stewards, Pateman polled at nine of the 25 meetings to claim the award from joint runners-up Tom Ryan and Darryl Horner Jnr.

One of those who had denied Pateman in the Tommy Corrigan Medal since 2015 was two-time winner John Allen (2016, 2017), who completed his successful transition to a bona fide star rider on the flat with his inaugural win in the Victorian Jockeys’ Premiership. The Irishman piloted 144 winners across the state in the 2020-21 season.

The Fred Hoysted Medal recognises a Victorian stable which has demonstrated excellence throughout the 2020-21 racing season. The award is judged by a panel of industry and media representatives taking into consideration both a trainer’s performances on the track and their overall contribution to the industry.

With 228 winners across the state, including 73 in metropolitan races, as well as $11.77 million in prizemoney and a win strike rate of 20 per cent, the Maher and Eustace partnership was undoubtedly the dominant force in 2020-21.

Sir Dragonet’s first-up victory in the 100th edition of the Ladbrokes Cox Plate (2040m) at The Valley was their biggest win, whilst the training duo’s availability to media and willingness to assist in the promotion of the sport were other contributing factors in their Fred Hoysted Medal success.

The other honour presented tonight was the Colin Alderson Award, which recognises an emerging talent among Victoria’s training ranks and has been won in recent years by Nick Ryan (2020) and Matt Cumani (2019).

Open to Victorian-based trainers aged 40 years and under with no more than seven seasons as a licensed trainer, the 2021 Colin Alderson Award was presented to Wangaratta-based horseman Ben Brisbourne.

Brisbourne only has a relatively small stable but punched above his weight last season, training 28 winners – up from four the previous season – at a win strike rate of 15 per cent and a place strike rate of 37 per cent. The 32-year-old Englishman enjoyed a career highlight when he prepared Fontein Diamond to win this year’s $250,000 Country Mile Series Final at The Valley on All-Star Mile Day. 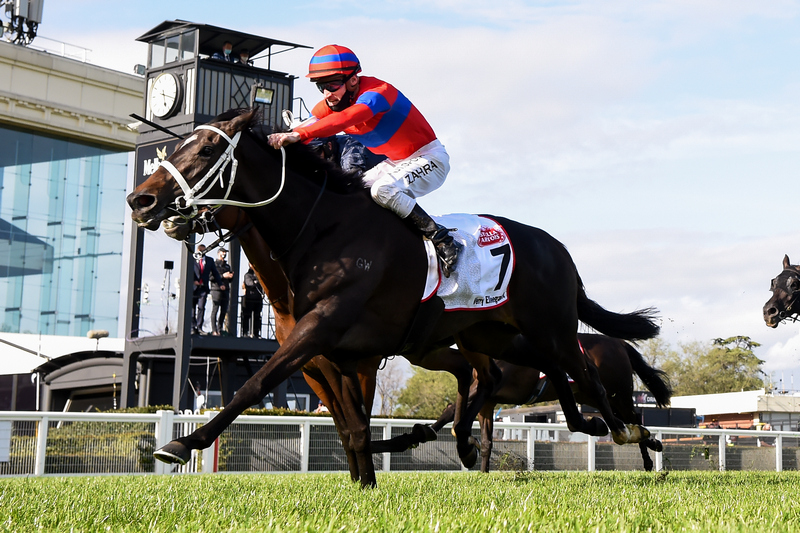