Powell turns back the clock on Time Lord

The Australian heavyweight jockey only returned to race-riding in October, after successfully beating thyroid cancer.

Powell, whose last win came with Lim’s Spin on March 20 when he then sat joint-second with Ruan Maia on the log on 15 winners, has not been taking many rides since returning from the sidelines, but the feeling of crossing the line first at his 22nd attempt must have felt as exhilarating as the day his doctors told him his scans were clear. 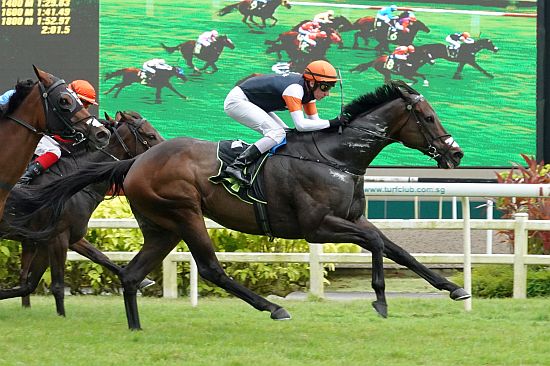 “It took a few rides to get that first winner!” said Powell.

“I’ve been riding well without winning. I rode a lot of placegetters at 59kgs but it’s hard for these horses to win after that.

“Hopefully, I can get my weight back down by another three kilos. Right now, I’m riding at 57kgs minimum but I would like to be around 55kgs.

“I’ll see my doctor this week as I still need to get my blood checked, but I feel good and I’m getting better in terms of my fitness.

“We’ll see how things go, but it’s also pretty hard to compete these days. Anyway, it’s great I got a one-year licence for next year, and get another chance to prove myself.”

Ironically, the veteran rider (now 50) took a harmless tumble from Speedy Missile in the previous race, but straight away bounced back to that much-needed fillip aboard Time Lord for Mark Walker.

The three-time Singapore champion trainer doesn’t use Powell all that frequently, but interestingly, his first Kranji winner Rio Fortune was recorded 10 years ago on November 14, 2010 with Powell in the saddle.

“It’s great to see JP back in the winner’s circle. He rated this horse a treat,” said Walker.

It was indeed another heady ride from the astute judge of pace. Though caught wide without cover in the early stages of the staying event, Time Lord ($67) pressed on to settle in a handy spot behind leader Golazo (Marc Lerner) and outside favourite On Line (Vlad Duric).

The Guillotine six-year-old was flushed out a little wide as the field fanned across at the point of the turn, but under a typical well-balanced and rhythmic whip riding from Powell, they gradually gained the ascendancy down the middle of the track for a win that had eluded Time Lord in seven starts since March 7.

The Michael Clements pair of Implement (Louis-Philippe Beuzelin) and On Line made the strongest appeal at the 200m, but they could not quite inflict the telling blow to settle for third and fourth place respectively, around half-a-length away.

The winning time was 2min 4.73secs in the race also regarded as the “consolation stakes” for those who couldn’t make the cut in the Group 1 Singapore Gold Cup (2000m) due in a few hours’ time.

“He’s a funny horse who just had a wind op. He mixes his form,” said Walker.

“He was backing up from his second (to Senor Don) last week (Sunday). I’ll give him a break now.”

In 22 starts, Time Lord has chalked up a record of four wins and three placings for stakes money around the $180,000 mark for New Zealand owner Matthew Goodson.

“Mark told me that horse had a wind op and to let the horse breathe,” said Powell.

“I didn’t want to choke him up and see him get on the bridle. That’s why I left him where he was, he wasn’t pulling and wasn’t off the bit.

“It all worked out well and it’s great to ride a winner for Mark. I ride a few horses for him in trackwork, and he’s always been very kind to me by giving me race rides.

“Mark and I go back a long way. Yes, I remember riding his first winner and we’ve always had a good partnership since, even if my weight doesn’t give us that many chances to team up.”

On the other hand, Woodworth who links up more often with Walker, went one better for the New Zealander one race later when he drove $50 shot Buddy Buddy to a stunning four-and-a-quarter length win in the $50,000 Tropaios 2013 Stakes, a Class 4 Division 1 race over 1600m.

With wins drying up in the last six weeks or so, Walker has been losing ground and almost fighting a losing battle to retain his title against Clements’ stronger artillery, but that double tonic will give him a glimmer of hope.