John Powell woke up to the stunning news on Friday that he has hastily been put out to pasture by social media when he had only taken a three-month leave.

The veteran Australian jockey, who is a Singapore permanent resident and has plied his trade at Kranji since 2005, flew out to Sydney on Wednesday for three main reasons – see his ailing father, as well as reunite with his daughter Madison whom he has not seen since July, and give a recent shoulder pain time to heal.

But as far as the 51-year-old was aware, his jockey’s licence was still safely tucked away in his document file – contrary to the bombshell news that has been doing the rounds on social media he had relinquished it. 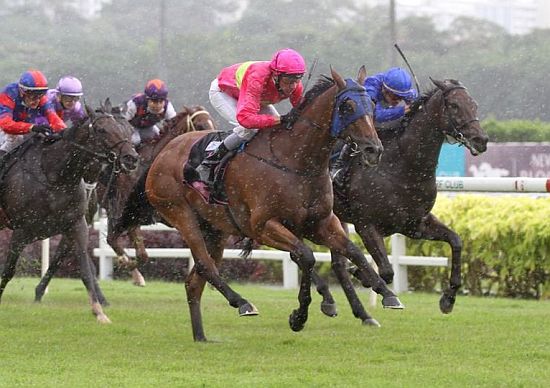 John Powell at his most recent win at Kranji, on Golden Flame on March 27, picture Singapore Turf Club

From a Sydney hotel where he just began serving his two-week quarantine, Powell rang up to set the record straight.

“Contrary to what has been said on social media, I have not relinquished my licence. If I had, the Singapore Turf Club would have been the first to be notified,” said Powell.

“My riding gear and my trophies are still in the jockeys’ room. Singapore has been my home for 16 years, I just don’t pull up stumps overnight.

“The Chief Stipe John Davidson even called me to enquire what was going on and I reconfirmed to him what he already knew, that I have applied for leave for three months and was just going back to Australia for personal reasons.

“Prior to me leaving Singapore, I’ve been feeling some pain in my right shoulder when I put downward pressure on it and when I pull the whip.

“I got some scans done, thinking it was the rotator cuff, but luckily, it wasn’t. Doctors told me I had fluid in a pocket around that area, and said I needed to rest it for a little while.

“At the same time, my aunt called me to tell me my dad was not well and had been admitted to hospital. I panicked as I was worried I wouldn’t be there by his side should something happen to him.

“But I’ve also been wanting to go back for a long time as I haven’t seen my daughter for almost two years, even if I did see her for half-a-day back in July (because of COVID-19 border restrictions between Australian states then; daughter lives in Queensland) when I went home for treatment to my thyroid cancer (which he has fully recovered from).

“I had been hoping the air travel bubble between Singapore and Australia would have opened by now, but it doesn’t look like it would happen anytime soon.

“How much longer can I wait? With my dad’s situation and the shoulder issue, I thought it was the right time to go home for a while, but officially, I’d like to say it again, I haven’t retired.”

A winner of more than 1,600 races in a career spanning 36 years, Powell does, however, understand why some people have jumped to the wrong conclusion. It didn’t help matters that the rumour mill about his imminent departure from the Kranji riding ranks had been working overtime, fuelled further by his dwindling book of rides every week.

He said he’d be lying if he had not been toying with the idea of hanging up his boots.

“After I see Maddie, my dad is sorted, and my shoulder has rested, I will then make a decision mid-July. There is a chance I won’t come back,” he said.

“To be honest, I’ve been sick and tired of being here by myself, waiting for the air travel bubble to open, getting only one or two rides a week, but at the same time, I also had a one-year licence to see out.

“If I return, I can either keep riding, at least till the end of the year and then retire, or get a new role at the Singapore Turf Club in some capacity, what it is, I’m not sure yet. Racing and Singapore have given me so much and I’d like to give something back in some way or another.

“Whatever decision I make, you can rest assured the Singapore Turf Club will know it first.”

A mainstay at Kranji since 2005, the year he famously won the Group 1 Emirates Singapore Derby on longshot Hello And Goodbye for Bruce Marsh’s inaugural winner since the Kiwi trainer moved from New Zealand to Singapore, Powell actually had shorter stints at Bukit Timah in 1996 and 1997, booting home nine winners.

All-up, Powell, who rode for many years mainly for Don Baertschiger and now his son Shane, and is noted for being an astute judge of pace, has recorded 640 winners in Singapore, including 17 at Group level, notably three Group 1s. Besides Hello And Goodbye in the 2005 Singapore Derby, he recaptured the glamour race with Clint in 2011 and also won the Kranji Mile aboard Waikato in 2009.

Powell’s latest win came aboard Golden Flame for Donna Logan on March 27. He was last seen on a racecard at the Lion City Cup meeting on April 24 with his last ride Surpass Natural ninth in the Group 1 1200m event itself.