Jockey Bernardo Pinheiro made his fourth visit to Singapore count with a brilliant riding double on Kranji Mile day on Saturday.

The young Brazilian rider, who was booked by trainer Steven Burridge to ride Mr Malek in the day's highlight, the Group 1 Kranji Mile (1600m), opened his account aboard Pennywise, who became his first ride after Ironprince was scratched in the opener.

He then finished a creditable third at his main mission, but though he had only one ride left, he would not leave without paying another visit to the Kranji winner's circle. 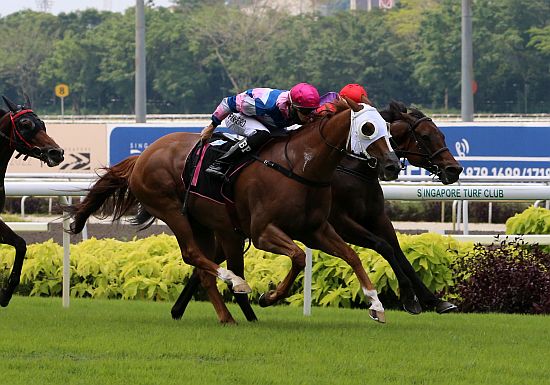 The brace was understandably greeted with a toothy grin from the Rio de Janeiro native at the Sky Eye lead-in.

Pinheiro finished second three times from 13 rides on three previous one-day visits to Kranji, two of which were on Mr Clint in the Group 1 Singapore Derby (1800m) and the Group 1 Raffles Cup (1600m) in 2019.

“It felt very good to get a winner (in Singapore) finally because I’ve had a few seconds before,” said the 25-year-old jockey who has ridden in Brazil, Uruguay, Bahrain, Malaysia and Dubai in close to nine years of his career.

“Getting a double was even better. It’s a pleasure to be here today.

“Thanks to the trainer (Ricardo Le Grange) and owner (Bernard Kantor) for the amazing ride (on Pennywise).

“Sky Eye was very impressive, too, and I want to thank the trainer (Lim) and the owner (Gan Gim Chuan) for their support as well.

“I’m thankful for everything because if you look back five years ago, I couldn’t even speak English well. Thank god everything is going well for me now.”

A six-year-old son of Pure Prize, Pennywise broke from gate five (Gold Strike and Strong N Best were scratched before the race) in the $70,000 Debt Collector 2016 Stakes to grab the lead from Big Tiger (Akmazani Mazuki) on his inside.

Elite Incredible (Hakim Kamaruddin) followed closely in third, while the favourite Tangible (Manoel Nunes) settled in midfield on the fence.

Steadying up the pace to slow sectionals, the $38 shot was only dug up for his run at the top of the straight.

As Pennywise worked hard to fend off his nine rivals, he hung out a little under pressure, with the gap left on the inside at the 400m an invitation for Tangible to chime in.

Pennywise was even headed by the Michael Clements-trained gelding a furlong out but Pinheiro was not about to let that first elusive winner slip on by this time.

Defying his Polytrack specialist tag, Pennywise rallied under his urgings to nose Tangible out on the line, incidentally also taking out his first win on the turf in 46 starts.

The course and distance might not have been Pennywise’s strongest suits, but Pinheiro still lauded him as a “fighter”.

“I had to push him out at the end, but this horse is a fighter, he fought very hard,” said Pinheiro who wrapped up his fifth stint in Dubai with 24 winners to wind up in fourth place on the 2021/2022 United Arab Emirates jockey’s Premiership.

“I sat in second in the middle (outside of Big Tiger), but my horse was keen. Once the horse (on my) inside let me go, I put him on the fence and my horse then relaxed really well.

“In the straight, I thought that if I left the fence, he would fight again. So I did it, and he raised another gear.

“I know the horse inside (Tangible) has a lot of finish, but once my horse saw him, he came back to fight again.”

Le Grange was overjoyed at the winner’s circle.

“They say he cannot win on the grass and he got his first win on the turf today,” said the South African handler, who bagged a double when Rocket Ryane came out tops in the $50,000 Cash Luck 2013 Stakes, a Class 4 Division 1 race over 1400m three races later.

“My good horse, Everest, lost both his front shoes and lacerated both hind legs (in Race 4). Leatherhead ran a huge race too.

“Pennywise was a great two-year-old, and he’s now racing as a six-year-old.

“We watched a few replays and I only said to him (Pinheiro) to get the horse to be as comfortable as possible and sit out the 1800m.

“This time, I think he got an easy sectional upfront, settled well and took off from there.

“(Owner) Bernard is an absolute gentleman and a great supporter of racing.

“I only picked the jockey a few days ago to ride this horse. I asked Steven (Burridge) if he’s got a ride in this race, and he said no.

Pennywise has taken his handy record to nine wins and ten placings from 46 starts for total stakes earnings edging closer to the $600,000 mark for Kantor.