Pax Animi on Derby trail after smart win at Kranji

Promising galloper Pax Animi bounced back to his best in the $70,000 Class 3 Division 1 race over 1400m at Kranji on Sunday.

Unlucky at his last start in the Group 2 Stewards’ Cup (1600m) when he ended up cluttered up in behind horses to finish at the rear, the Rebel Raider five-year-old was kept out of trouble this time around.

Held worse than midfield on the outside about six lengths off the leader and favourite Strong N Powerful (Juan Paul van der Merwe), Pax Animi (Vlad Duric) noticeably improved to sit in a striking spot at the top of the straight. 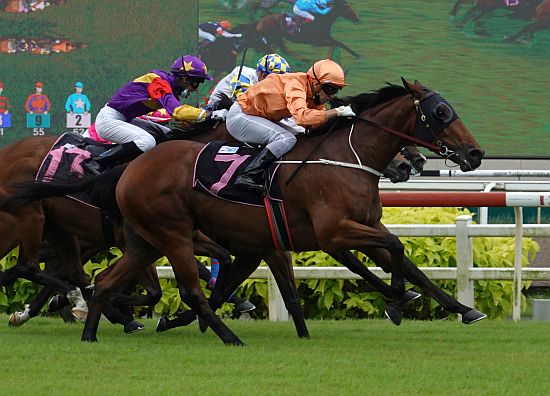 Pax Animi (Vlad Duric) runs on the best on the outside to take out Race 7, picture Singapore Turf Club

Loyalty Man (Simon Kok Wei Hoong) and Strong N Powerful were tussling it out inside the last furlong but Pax Animi ($19) finished a shade better on the outside to win with half-a-length to spare.

A tense fight for the minors was waged behind with Strong N Powerful just holding a nose advantage on Loyalty Man who beat Ocean Crossing (Mohammad Nizar) by the same margin. The winning time was 1min 23.43secs for the 1400m on the Short Course.

“That was a good win, but I think there is still a lot of improvement to come out of this run,” said the Australian handler.

“At his last run, he got badly held up in the straight and that was it. If not for that, he could have run a lot closer.

“He wasn’t really ready today, but he’s a good horse and he’s doing a good job. It was also a perfect ride from Vlad, and Michael Rodd (Brown’s former No 1 jockey who won once on Pax Animi) was the first to get on the phone to congratulate me.

“We’ll quite possibly look at the Derby for him.”

The Group 1 Singapore Derby (1800m) is due on September 6. Pax Animi is also entered in the Group 1 Kranji Mile (1600m) on August 16 but was in 25th place on the order of entry before the race. On 73 points, he needs around 10 points to increase his chance to qualify, but it is unlikely he will be slapped with such a penalty after Sunday’s win.

With that third win from five starts, Pax Animi has now collected around $110,000 in stakes earnings for the Buffalo & Nick Johnston Stable.