Jungle King surprised at big odds to give new trainer Mahadi Taib his first win at Kranji on Saturday.

The 50-year-old handler started out as a syce in 1988 and worked his way up to being an assistant-trainer for trainers Michael Clements, Theo Kieser, Young Keah Yong, David Hill, John O’Hara and most recently, Jason Lim in the past 13 years.

Now, Jungle King’s win in the $30,000 Class 5 race over 1200m has become the next best thing to happen to Mahadi after he was granted his trainer’s licence in June. 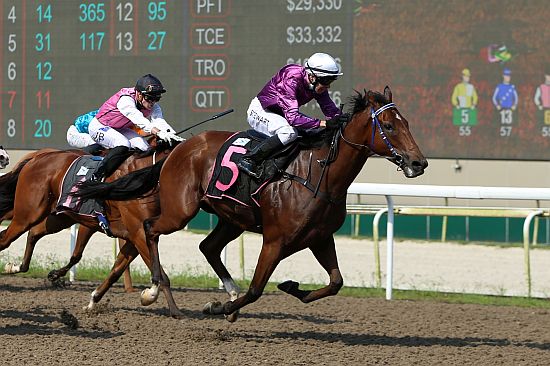 “I’m very, very happy to get my first winner at my second meeting,” said the unassuming Singaporean handler.

“I want to thank my stable staff and also my track rider, TR Barnabas because besides Ronnie (Stewart), he did a lot of work on this horse.”

Many did not favour Jungle King (previously known as Try Mak Mak) before the race as he was first-up close to nine months after he ran last for previous trainer Jason Ong in a Class 5 Division 1 race in October last year.

Moreover, he bled for a second time after that race, and was banned from racing for six months.

But the five-year-old son of Makfi looked to have put his issues behind him right from the moment the gates crashed back.

He was one of the best away to take up a handy spot next to the rails, right behind leader and favourite Knight Love (Bernardo Pinheiro) and City Hall (Krisna Thangamani).

Turning into the straight, Knight Love did not pull away as expected and Jungle King pegged him back before skipping away. He then easily held off the fast-closing emergency acceptor Rich Fortune (Jerlyn Seow) for a one-and-one-quarter length win.

Fountain Of Fame (Jake Bayliss) stuck on well for third place another neck away. The winning time was 1min 12.44secs for the 1200m on the Polytrack.

The $117 winning payout suggests Jungle King did not have many admirers, but Mahadi had a small inkling.

“He trialled well the last two times with Ronnie, and he was supposed to run over 1100m last week (June 26), but he did not eat well after his second trial (third to In All His Glory on June 16),” said Mahadi.

“I wasn’t very happy so I backed him off after that trial. He’s been doing very well since, so it’s not a surprise for me actually.

"Among my three horses (the other two were Bright Era and AJ Golden Sixtyone) today, I think he was one of the best chances.

“I told Ronnie to jump out, sit where he’s comfortable and go from there.

“Good for Ronnie. I've known him since he began riding here long ago."

Stewart was equally pleased to get his first win for Mahadi.

“I’m happy to get a first winner for him (Mahadi),” said the Australian jockey who went on to score back-to-back wins with Prosperous Return in the next race (see later report).

“The horse trialled very nicely a few weeks ago.

“He put the writing on the wall. Even though he’s first-up, he’s very well-prepared (with five trials).

“He did hit the front a bit too soon and looked around a bit, but he’s definitely improved and went really well.”

Jungle King has taken his record to three wins and three placings in 21 starts for total stakes earnings close to $70,000 in prizemoney for owner Ma Yaw Kiang.