In an extraordinary coincidence, Paul O’Sullivan and Karis Teetan simultaneously reached the Hong Kong 500-win milestone when the pair combined with Shadow Runner in the second section of the Class 4 Green Island Handicap (1200m) at Happy Valley on Wednesday night. 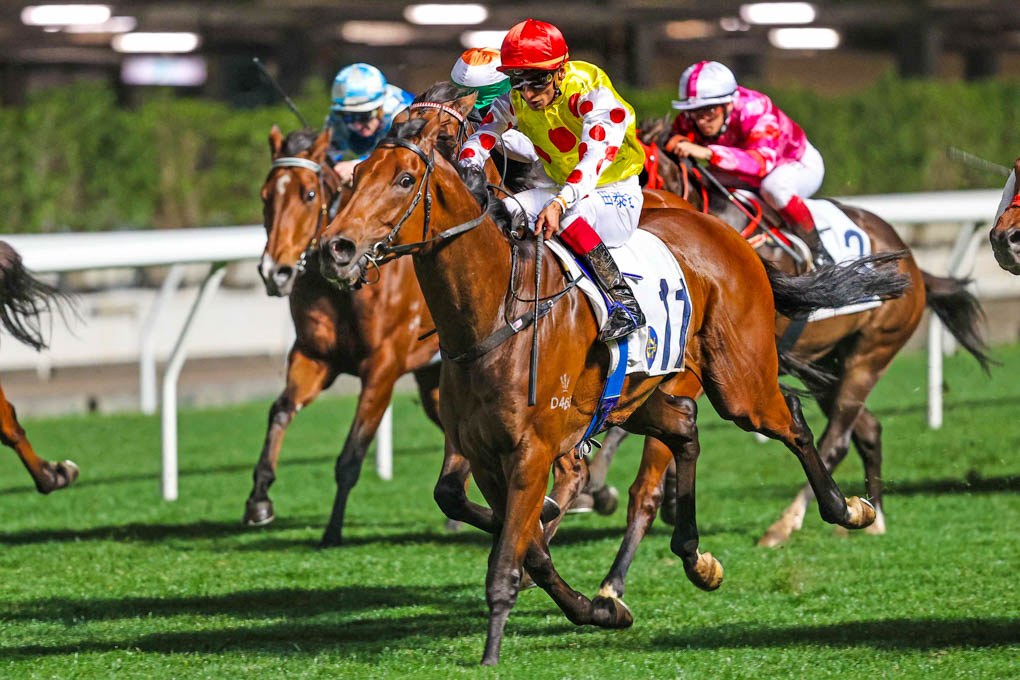 O’Sullivan, who moved to Hong Kong in 2004, was typically understated on reaching the landmark, marvelling at the unlikely probability of sharing the achievement with Teetan.

“I’m not a mathematician but that would be long odds,” O’Sullivan said of the coincidence. “It’s a great milestone for both of us, so it’s a great thrill. Hong Kong is a tough place to win a race so it means a lot.

“Onwards and upwards and try and keep adding to it. It really is a milestone.”

Teetan, who rode in Hong Kong for the first time in 2013/14 and since become a virtual fixture in the top bracket of jockeys behind Joao Moreira and Zac Purton, was unaware he had reached the 500-victory mark until he was told post-race.

“It’s a bit strange. I didn’t even notice my 500th and until I was coming back and the guys were telling me. It’s a nice number to get to but it doesn’t stop here, we keep going,” he said.
“It’s nice to ride a winner for Paul. He’s one of the nicest guys here. He’s always got a smile on his face so it’s nice to share a winner with him.”

Moreira followed his Sha Tin four-timer with another treble, to have 14 winners for the month but his arch-rival Purton prevailed in the night’s feature, pocketing the Class 2 Lantau Island Handicap (1650m) on Tony Cruz’s Beauty Joy.

“He was sluggish out of the gate, he felt stiff in his action and he couldn’t get into his rhythm early. It probably took him a good 400 metres for him to move nicely but the pace was on. We able to get a nice run until we came into the straight and it got a bit messy when a couple in front were stopping,” Purton said.

“My horse showed his versatility tonight and his tenacity to win. He was able to come through nicely and win. He was plagued with a number of small issues when he first arrived and he needed to acclimatise. Those two things took time. He needed time to get over those niggles and now we’re seeing the benefit of that. He’s lightly-raced and I don’t think he’s reached his ceiling yet.”

Moreira marched on from his Sha Tin quartet with victory in the first race tonight, clinching the Class 5 Po Toi Handicap (1800m) with a rail-hugging ride aboard Caspar Fownes-trained Tailor Made.

“He’s a bit of a thinker and he gets trapped inside horses and he switches off quite a bit. We were trying to change the gear around to see what works best for him. Blinkers back on today and a nice tempo and a smooth run and Joao was able to get the best out of him,” Hall said.

Benno Yung secured his 18th win of the season when Harry Bentley drove Ice Legend to victory in the first section of the Class 4 Green Island Handicap (1200m).

“I was disappointed with him last start (when 12th of 14 at Sha Tin on 27 December) but he performed well tonight,” Yung said. “Harry rode him well.”

A superb, ground-saving ride by Blake Shinn helped Loving A Boom end a 27-run losing streak as the Acclamation gelding posted his first win since May, 2019 with success in the first section of the Class 3 Cheung Chau handicap (1200m) for Richard Gibson.