One act affair as Wonderful Fly soars to Derby success

KRA Cup Mile winner Global Chukje was sent off as a prohibitive odds-on favourite but was notably sweating in the parade-ring and emerging from gate thirteen, found himself caught wide the entire way around.

While Do Kki Blade was acknowledged to have been the big winner from the barrier draw and was expected to lead, it wasn’t to be as Wonderful Fly bounded out of gate five and unexpectedly found himself at the front of the field as they went past the stands for the first time.

It was a lead that Wonderful Fly never looked like losing. 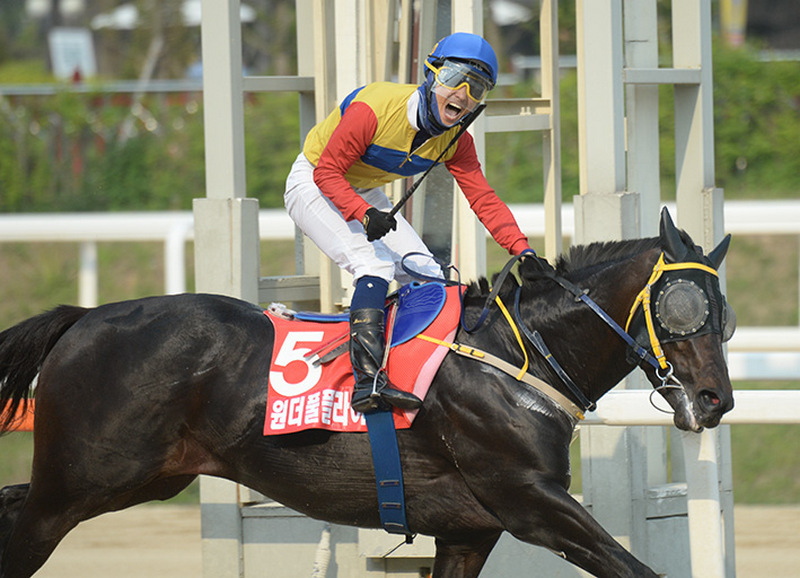 Global Chukje made it up to 2nd place coming off the home turn but quickly faded from contention and ended in 5th place while other expected pre-race big hitters such as True King and Glitter scarcely made any impact.

Ulitmately it was outsiders Simjangui Godong and Power Windy, the latter seemingly tailed off with three furlongs left to run, who would get the closest, albeit crossing the line a full two-seconds behind the winner.

For trainer Park Dae-heung it was a first Derby winner in a twenty-two-year career that has seen him win most of Korea’s big races.

“It wasn’t really my instruction to lead”, Park Dae-heung said of Wonderful Fly finding himself in front when most observers expected him to be ridden patiently.

“But I trust this jockey; he saw the opportunity and took it. It turned out he was right.”

As for that jockey, it was a second Korean Derby winner for Moon Se Young after the multiple Premiership winning rider partnered Jigeum I Sungan to victory in the 2012 edition of the race.

Wonderful Fly is a colt by Tiz Wonderful and out of Korean bred Butterfly (by Pioneering), who won one of nine races at Busan between 2010 and 2011.

Next Sunday it’s the turn of the fillies with the Korean Oaks at Busan while the final leg of the 2019 Triple Crown Series, the Minister’s Cup, is back at Seoul on Sunday June 16th.