Oliver and 'Pete too good in Caulfield's opener

Multiple champion jockey Damien Oliver gave his rivals a lesson in how to ride the 1100-metre circuit at Caulfield when jumping Saltpeter (by Pierro) out from the second widest barrier in the 12-horse field before proceeding to the land the opening event on Melbourne's Saturday metropolitan program, namely the $100,000 MRC Vale Graham Salisbury Handicap.

A handsome son of Pierro having his third race start, Saltpeter took up an advanced position on the shoulder of the race leader Clean Machine (by Brazen Beau) and, as so often happens in early sprint events staged at The Heath, the first two horses around the only turn went on to fight out the finish.

In yet another illustration of the veteran hoop still riding at the top of his game, Oliver arrested the lead from the aforementioned Clean Machine close to the winning post to register a narrow success.

Savannah Cloud (NZ) (by Savabeel), a debutant from the Phillip Stokes stable, showed distinct promise when closing late for third, ahead of race favourite Euphoric Summer in fourth.

Oliver was aboard Saltpeter when the youngster broke through for his first career victory in a Geelong maiden event at his previous outing and is clearly forging a burgeoning partnership with the John Moloney-trained 2-year-old. 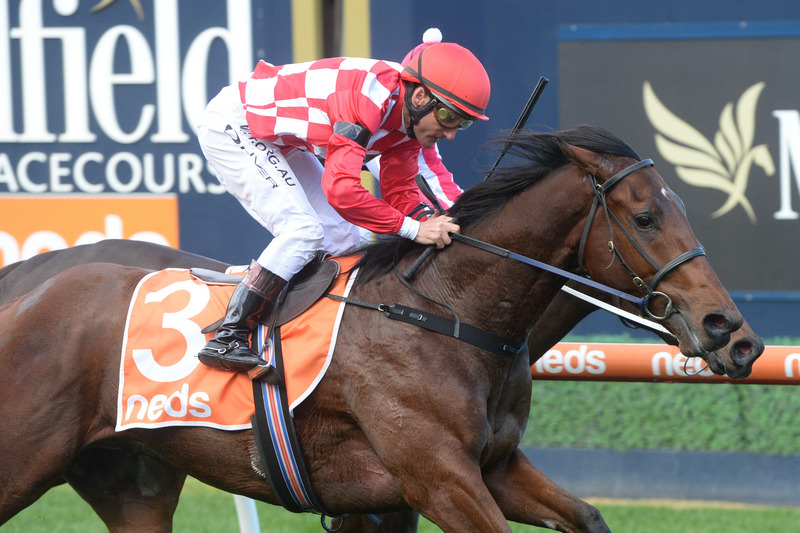 “He’s a nice horse,” remarked Oliver after his latest win aboard the Pierro gelding.

“I trialed him early. I didn’t go to Sale to ride him [at his first career start]. I thought he’d run well, but he’d need that run. He just really came on from his first and second run.

“He was professional at Geelong. We were looking at a midweek race but we put him in this race because he’s improved so much.

“He ended up getting in a nice position just outside the leader. He’s such a foolproof little horse. He puts himself in the race, travels well and gives you everything he’s got. He’s a little ripper.”

Oliver proceeded to predict: “I’m sure he can skirt around the fringes in the spring and there’d be a nice race for him.”

Winning trainer John Moloney was suitably impressed with his charge's latest win, although he did confess to having some reservations regarding a small drop back in distance.

“He did that bit of work to get there and showed nice guts and determination to go on and win the race,” observed the Caulfield based horseman. “He keeps on improving; only his third start, so pretty happy with that.

“It wasn’t always going to be my idea [dropping back to 1100m], but talking it out with Damien’s manager, and Damien himself, we decided to come to this race by coming back a hundred yards in distance.

“I said to Damien that it looks like he feels a bit brighter than the last run, so don’t be surprised if he has got that bit of toe to put him in that [forward] position.”

Moloney concluded by saying that a small spell is now on the cards for Saltpeter before aiming the rising 3-year-old at better races later in the calendar year.

“I think he’ll have a break,” claimed Moloney. “I’ll talk to Rob Crabtree — he’s a major shareholder in the horse, [and] he’s got the mare… But we might give him a winter break and then try something in the spring if he is up to that.”

Saltpeter scored by a head, with three-quarters of a length separating Clean Machine in second and Savannah Cloud in third.

Euphoric Summer was the race's $2.90 favourite but, according to trainer Mick Price, “Gave away a start” by turning her head at the last minute.