The Singapore Derby comes up next Sunday, but trainer Shane Baertschiger might have a serious prospect for next year’s renewal if Red Ocean’s dominant all-the-way win in the $75,000 War Affair 2014 Stakes, a Novice race over 1400m at Kranji on Sunday is anything to go by.

A half-brother to Baertschiger’s Group winner Preditor (both out of Danasinga mare Bird), the Ocean Park three-year-old opened his account in a similar seven-furlong contest with a gutsy win in Restricted Maiden company three weeks ago.

However, the follow-up looked even more impressive on what turned out to be also a good day out for the family in two different countries. More pointedly from a big-race potential perspective, there was certainly a touch of class from the way Red Ocean made light of a few curveballs thrown at him this time around. 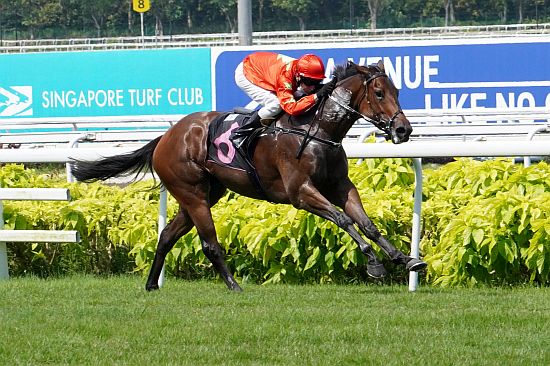 The start was delayed when two horses (Our Final Offer and Dragon Sands) reared in the gates separately and were subsequently scratched, but Red Ocean (Danny Beasley) never turned a hair inside his barrier No 5 and sprang the gates when they were finally sent on their way.

And when King Arthur (Jerlyn Seow Poh Hui) came eye-balling him midrace, he again shook off the pesky presence like a seasoned galloper, absorbing the pressure with aplomb to still go through the line towards a cruisy three-length win.

Donning cheekpieces for the first time, Prodigal (Shafrizal Saleh) was still not the easiest conveyance to navigate around in a more rearward spot than usual, but still worked home nicely for second place, three-quarter length ahead of Ricvelo (Louis-Philippe Beuzelin). The winning time was 1min 23.21secs for the 1400m on the Short Course.

“Danny told me he stood there for so long, but still came out half-a-length clear when they jumped,” said Baertschiger.

“He did have a soft lead, but when the second horse took him on from the 600m, it didn’t worry him.

“He has definitely improved from his last win. He will be a Derby horse next year.”

Incidentally, another half-brother, but a full-brother to 2018 Group 3 Jumbo Jet Trophy (1400m) winner Preditor, also won on the same day in Australia, two-year-old colt Shadow Hawk and prepared by the same former trainer for Preditor, Trent Busuttin in partnership with Natalie Young.

“Trent had a full brother to Preditor who won at Warracknabeal (in a Maiden 1200m) today, Shadow Hawk,” said Baertschiger who forged his friendship and business ties with the son of trainer Paddy Busuttin from the time they were both assistant-trainers to their fathers (Shane’s was Don) at Kranji.

“He’s also by Savabeel and out of Bird like Preditor. Family’s doing great.”

Red Ocean may still have some way to go before he comes close to big bro Preditor’s $590,000 stakes earnings, but it’s fair to say he is well on his way with $84,000 already pocketed from his two wins from five starts.