US Navy Flag is set to spearhead a potentially substantial Ballydoyle assault on the Darley July Cup after Aidan O'Brien was responsible for no fewer than ten of the 19 acceptors for Saturday's sprint showdown.

The colt, last season's European champion two-year-old, will drop back from a mile for his first start over six furlongs since he landed the Middle Park Stakes last autumn for a stable without a standout sprinter following the retirement of Diamond Jubilee Stakes winner Merchant Navy.

They do, however, have plenty of them, and bookmakers reckon US Navy Flag is O'Brien's best chance of a fourth winner in the race – he is second favourite at 5-1 behind Blue Point, with last year's winner Harry Angel ruled out on Monday. 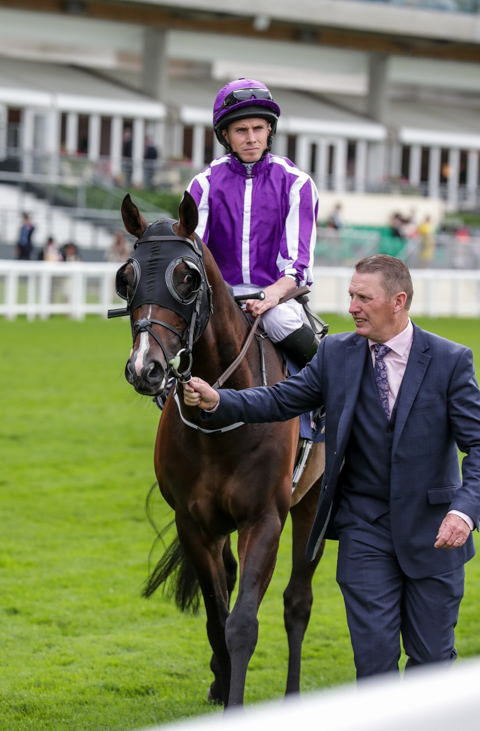 O'Brien said: "We’re looking at dropping US Navy Flag back in trip for the July Cup. That’s been the plan for him.

"He could be joined at Newmarket by a couple of others – a lot of those horses who ran at the Curragh on Derby weekend would be possibles for the race as well.

"The likes of Fleet Review and Intelligence Cross could join him. We’ll make a decision later in the week."

US Navy Flag became the first horse in 35 years to complete the Middle Park-Dewhurst double last season but has failed to hit the same heights in 2018, his Irish 2,000 Guineas second the best of four runs.

He was only ninth of ten in the St James's Palace Stakes last time, the latest of three winless efforts at a mile.

US Navy Flag will be taking a similar step back in distance to Limato, whose miling exploits appear at an end.

Limato won the July Cup in 2016 and was runner-up last year, both times under Harry Bentley, who will be restored to the saddle at the weekend.

Limato will have his first run at six furlongs since he was beaten a length and a quarter by Harry Angel a year ago, having failed to convince he was capable of gaining top honours at a mile.

Owner Paul Jacobs said: "He was far too keen for his own good in the Lockinge and Queen Anne. He pulled very hard and in neither race was it possible to get him cover, which accentuated it, and it just didn't look and feel to us as if he got home.

"In spite of him clearly staying seven furlongs well, it would seem somehow the extra step is one too far. We've gone back to the future and confirmed for the July Cup.

"He was first and second in the July Cup and both times with Harry on board, who is down to ride him on Saturday."

James Doyle, who was preferred for Limato at Royal Ascot, has been claimed for Godolphin's Dreamfield.

Jacobs added: "It was a very simple choice. Harry's record at Newmarket on both tracks has been outstanding. We're happy to continue the reunion and see what transpires."

Bentley said: "I'm pleased to be back on the horse and hope he can run well. Back down to six furlongs should be good for him.

"He finished second last year to Harry Angel and won it the year before so has a good record in the race. He has every reason to run well."

Harry Angel, meanwhile, has not recovered in time from the cut leg sustained when getting it caught on the stalls as they opened for the Diamond Jubilee, which cost him all chance.

Trainer Clive Cox said on Godolphin's website: "I’m afraid he’s not going to make it in time. After reporting he had done well with the cut to his leg, I feel he's still not 100 per cent and won’t be ready.

"I couldn’t be confident at this level. You have to be at the top of your game to win a July Cup.

"I need more time to get him back to his very best. I feel that the Haydock Sprint Cup in September is a realistic plan."