Numbers game for Clements in the Kranji Mile

On paper, trainer Michael Clements may not have the best horse in Saturday’s $1 million Group 1 Kranji Mile (1600m), but he has the most.

And in a game where numbers mean everything, four guaranteed runners and two emergency acceptors, is a good hand to have.

The naturalised Singaporean will saddle Top Knight, Spirit of Big Bang, Heartening Flyer and Trumpy and while he knows they all face an uphill battle to beat the top-rated horses at weight-for-age at Group 1 level, he is cautiously optimistic.

“Look, we know it’s a very tough ask for horses down in the ratings at the weights, but all our horses are fit and well and should be competitive,” said Clements after the handicaps were released on Monday evening.

“A good draw, a bit of luck and who knows what can happen.” 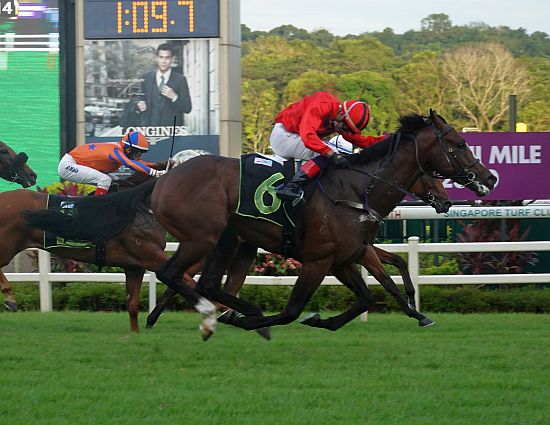 Heartening Flyer will be ridden by jockey Shafrizal Saleh in the Group 1 Kranji Mile on Saturday, picture Singapore Turf Club

A meticulous man, Clements was more than happy to give a detailed run down of his likely four runners, starting with Top Knight, a Group 1 weight-for-age winner (2020 Queen Elizabeth Cup) in his own right.

“For me, he (Top Knight) was at his peak two years ago in Group company and I also think the horses he faces now are of a better quality.

“So it’s a tough ask against this lot and these days, he really needs the rain to be competitive at this level, but the Long Course on Saturday will help him.

“(Jockey) Benny (Woodworth) will ride him quiet and if it does rain and there is a good tempo, he could show his best.

“But to be honest, if you want a sunny day in Singapore, just enter Top Knight as he hasn’t seen a wet track for ages!”

Clements, who was crowned champion trainer in Singapore in 2020 and currently sits second on the premiership with 20 winners (six behind leader, Tim Fitzsimmons), was also circumspect when discussing Sprit Of Big Bang’s chances.

“We always thought he would be up to this type of race in Singapore but he has had an interrupted career,” continued Clements.

“He has had soundness issues the last two years but we thought his first-up win this preparation warranted a late nomination for this race, especially given that was on the Poly(track) over 1100m and all his previous wins (four) were all over the mile on the turf.

“He’s good at the moment and while weight-for-age is a big step-up in class, he has a small ‘outsiders’ chance with (jockey) Louis (-Philippe Beuzelin) riding him on Saturday.”

Clements was more effusive about the chances of his third runner in rating order, Heartening Flyer.

“We have always rated him very highly,” explained Clements.

“He has also had soundness issues but we knew when he was right, he would be more than capable at this level.

“Obviously, his last effort was very concerning (he finished second last over 1400m in April) and he pulled up sore after the race.

“But he bounced out of that run really well and the vets have done a lot of work and he’s really turned around.

“Again, things have to go his way at this level but he’s in good enough order to run a big race.”

Claiming rider, Shafrizal Saleh, has been given the job on the five-year-old New Zealand-bred gelding and Clements was more than happy with the booking.

“He (Shafrizal) has won a Group race (Starlight in the Group 2 Singapore Three-Year-Old Classic last year) for us and I didn’t hesitate to put him on the good horses.

“He’s ridden this horse well before and rides him a lot in trackwork and trials and they seem to get on very well together.”

And what of Trumpy, his fourth guaranteed runner in the $1 million classic?

“It’s a big ask for sure,” disclosed Clements of the Argentinean-bred six-year-old.

“But condition-wise, he has come on a bit since his last run and his last gallop was probably the best since he has been with us.

“His form has been good enough of late. If he finds his feet in running for (apprentice jockey) Hakim (Kammarudin), he could surprise a few people.”

And what of the emergency acceptors if they don’t get a run in the feature race?

“The trip suits both of them and Tangible is in very good form with (jockey, Manoel) Nunes staying on, while Hakim will ride Elite Incredible, who will race more forward as we think that’s what is best for him.” 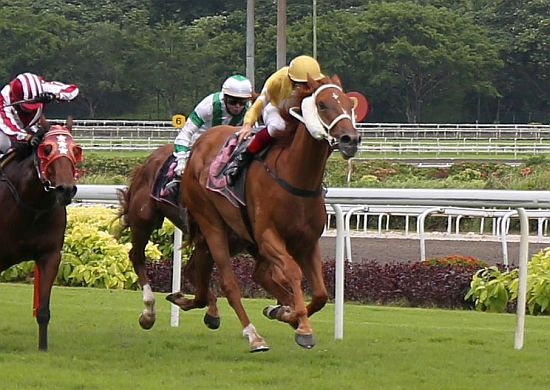 Clements is also looking forward to the return of the unbeaten three-year-old Alqantur, in the $50,000 Class 4 Division 1 race over 1200m on the turf.

“He’s an exciting horse,” enthused Clements, who also won the trainers’ premiership in his native Zimbabwe before moving to Singapore in the late 1990s.

“Nunes will ride him on Saturday and he looks suited first-up in the Class 4 company, so we think he will go well.”

And is it good to have both Group 1 racing and the crowds back at Kranji?

“I expected it to be a slow take-up but they (the customers) came back in droves the first day they could.

“It’s great for the atmosphere, especially on a big day like Saturday.”

Will that bumper trackside crowd be cheering a Clements upset in the Kranji Mile?

Quality says Clements could be playing ‘chess with checker pieces’ but numbers suggests the upset is a chance.