The Abu Dhabi Equestrian Club staged one of the biggest meetings of the capital racetrack’s season on Sunday, highlighted by the 2200m Purebred Arabian Group 1 HH The President Cup, won stylishly by Somoud under a polished ride from Richard Mullen.

Riding for Yas Racing and Jean de Roualle, Mullen settled the 7-year-old homebred entire in about sixth of the 13 runners behind a frenetic early gallop set by first Barrelaman and then Basmah. As distress signals went out on the latter, Mullen, who had eased into contention on the home turn, attacked at the top of the straight, his mount responding well and opening up a decisive lead.

BF Mughader and Dagui Lotosi both finished well but Somoud was not for catching, adding this big prize to the Group 1 Emirates Championship, over the same 2200m, he won last March when trained by Ahmed Al Mehairbi.

Mullen said: “I was drawn a bit wider than ideal, but I was able to get him settled and we knew there was going to be a good gallop today which he really needs.

“He was always going well and I probably had to commit for home sooner than ideal, but with this short straight, you cannot take risks.”

Mullen won the race on Loraa for De Roualle in 2017 and the Frenchman also landed the spoils last year with Rmmas under Tadhg O’Shea.

De Roualle added: “I am so grateful to Sheikh Mansoor for the opportunity to train these lovely horses and I am blessed to have such a good job. We have won this prize three times in five years which is a great team effort.” 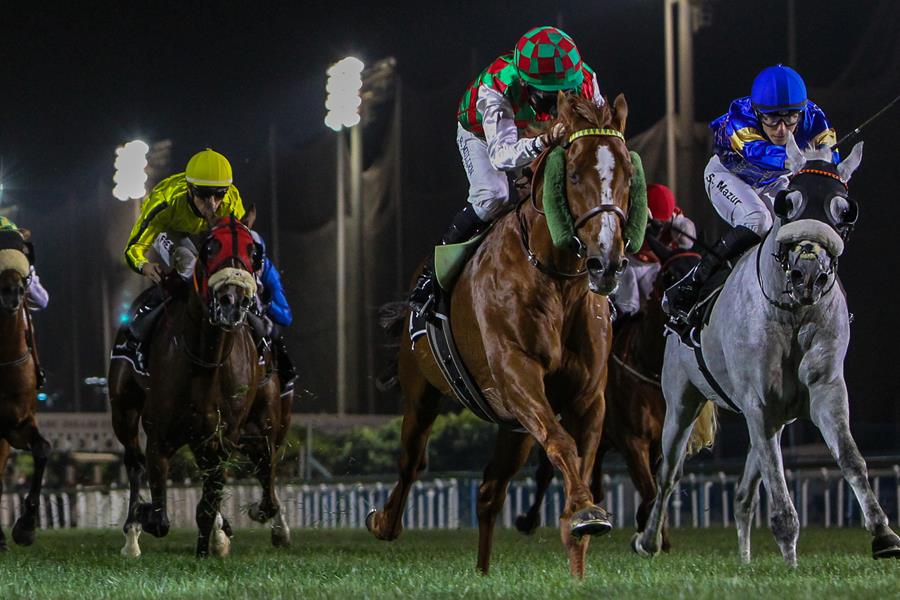 The Thoroughbred HH The President Cup, a 1400m Listed contest, looked wickedly competitive with a field of 15 taking part, but that did not prove the case with Mullen scoring an emphatic success aboard Medahim for Satish Seemar and Sayed Hashish.

A 7-year-old gelded son of Kodiac, Medahim won thrice in Britain for previous connections, but was opening his local account at the fifth attempt. He started this season twice finishing second, over 1600m here in Abu Dhabi, to Boerhan, fourth on this occasion.

The second of those runner-up finishes was actually in the Listed National Day Cup when denied right on the line. He then went to Meydan and was far from disgraced when seventh in the 1400m Group 2 Al Fahidi Fort. Settled in midfield here, he showed taking acceleration to pass numerous rivals and storm clear entering the final 200m with the race soon in safekeeping.

Mullen said: “I actually dropped my whip in the National Day Cup so I owed the team that. We knew the 1400m here would really suit him. That was a massive effort and very impressive indeed.”

A 1600m maiden kicked things off and it would be hard to begrudge Aahid Al Khalediah II his breakthrough success having finished second in four of his six previous career outings and all bar one of his four local starts. Trained in Al Ain by Helal Alalawi for The National Stables from where he trains, the 6-year-old entire was runner-up on his turf debut, over this Abu Dhabi 1600m, a fortnight ago and made no mistake this time under a confident Pat Cosgrave. Happy to take his time, on the inside rail, just in behind early leader Al Capone Monlau,

Cosgrave decided it was time to go exiting the home turn and the race was basically all over, the pair surging clear to score decisively.

Cosgrave said: “The trainer and his team have always really liked this horse and I really thought we would win the last day, but his first time on turf was perhaps just a bit all too new for him.

“The way he travelled today he could certainly cope with dropping to 1400m, but he has seen out this 1600m well.”

Harry Bentley then employed virtually identical tactics to land a 2200m handicap aboard Whistle for Abdallah Al Hammadi and his main patron, Al Ajban Stables. Settled in third, but second of the main group behind AF Kafu who opened up a healthy lead about halfway, Bentley’s mount was in position to attack when the early leader weakened entering the straight.

Several tried to challenge, but Whistle found plenty for pressure to win in determined fashion and shed his maiden tag at the sixth attempt on his fifth appearance of the campaign.

A 5-year-old entire, he was having his third turf outing and was bettering his best previous finish, a 2000m third in a maiden on the Sharjah dirt,

Al Hammadi said: “We were very hopeful this stamina test would suit him because his best run was when staying on over 2000m and it has. He is lightly raced and, we hope, improving.”

A 1600m maiden for horses in private ownership developed into a duel over the final 150m at which point Murooj had grabbed the initiative from a weakening Saheel Al Megirat only to be challenged immediately by Alsaeid. The pair traded blows throughout the final stages before the last named, under Szczepan Mazur, produced a late lunge as the line approached to snatch the spoils in thrilling fashion. Saddled by Ibrahim Al Hadhrami for Ben Shahwan Arabian Horse Stables, the 5-year-old entire was having just his third turf outing, but first since March. Previously unplaced on the grass, he has a pair of both second and third place finishes in dirt races to his credit.

Mazur said: “I am lucky to ride some nice horses for these connections and the trainer has always thought this horse has plenty of ability and the return to turf has suited him.”

Al Hadhrami said: “He has been placed on dirt, but we always thought he could win and we now know he goes as well, if not better, on turf.”

Over 1600m, restricted to 4-year-old fillies foaled in the UAE and with Prestige status, the Emirates Fillies Classic was well contested with at least half of the 15 runners holding a realistic chance entering the straight. This was the moment that Antonio Fresu chose to set sail for home on Mumayaza in what proved a decisive move as the pair shot clear and always looked to be holding the challenges of Rawaat Al Reef, Heba Al Wathba and her own stable companion, Foah. The last named, as well as the winner, was saddled by Eric Lemartinel and she clearly impressed Fresu, doubling her career tally after four starts in the process having landed a 1000m Abu Dhabi maiden on her second start.

Fresu, sporting the silks of Sheikh Khalifa bin Sultan bin Khalifa Al Nahyan said: “She was a nice spare ride and I have to thank connections for the opportunity. She has plenty of natural speed and really quickened when I asked and, although tiring, has stayed on well over a trip plenty far enough for her.”

Eight went to post for the colts and geldings’ equivalent, also over 1600m for 4-year-olds foaled in the UAE and a Prestige contest, but seven may as well have stayed home with the irrepressible Hameem maintaining his unblemished debut season, remaining unbeaten after six starts. Completing a double for Abdallah Al Hammadi and Al Ajban Stables, the colt now has five consecutive turf victories to his name under Adrie de Vries, having won on his racecourse bow on dirt at the end of October under Jose Santiago. De Vries barely moved a muscle as he ghosted his mount past early leader AF Muataq after which the result was never in any doubt. On his previous start, over this 1600m, he won the Listed Arabian Triple Crown R1 having previously beaten his elders in the Abu Dhabi Equestrian Gold Cup, another Prestige race over this course and distance.

De Vries said: “He has broken well from the stalls today, so I just kept it simple and he seems to be improving all the time. He is very smart.”