Whilst a rematch between State Of Rest and Anamoe is set to illuminate the Ladbrokes Cox Plate (2040m), a host of emerging stars from near and far are hoping to write their names into racing folklore with victory in the Carlton Draught Caulfield Cup (2400m) and the Lexus Melbourne Cup (3200m).

Nominations for the three flagship races of the 2022 Victorian Spring Racing Carnival closed at on Tuesday with the number of international entries returning to pre-pandemic levels with 56 horses entered by 26 different stables.

Before the closure of entries for the trio of Group 1 contests, Irish trainer Joseph O’Brien – who also holds 12 nominations for the Caulfield Cup and 10 for the Melbourne Cup – signalled his intention to pursue a second straight Cox Plate with recent Royal Ascot hero State Of Rest.

The four-time Group 1 winner headlines the 135-strong list of contenders for Australasia’s weight-for-age championship alongside 2021 runner-up Anamoe and Annabel Neasham’s middle distance megastar Zaaki, who is on a redemption mission after he was scratched as favourite on race morning last year.

Anamoe, a winner of more than $4 million in prizemoney, is trained by James Cummings who featured at today’s nominations announcement in Melbourne alongside his brother Edward, the trainer of triple Group 1-winner Duais.

Duais holds joint favouritism for the $8 million Melbourne Cup, which has this year attracted 186 nominees – the highest number of entries in the past 10 years. The ‘race that stops the nation’ on the first Tuesday in November has attracted 43 international entries – second only this decade to the 50 received in 2018.

This year’s TAB Australian Cup (2000m) winner is also the outright favourite for the $5 million Caulfield Cup, which has this year received a total of 169 nominations including 32 international entries – up from nine in 2021.

Her trainer is now dreaming of emulating the deeds of his grandfather, the late, great Bart Cummings, who completed the Caulfield-Melbourne Cup double on two occasions: first with Galilee in 1966, before repeating the feat 25 years later with Let’s Elope.

Racing Victoria’s (RV) General Manager – Racing Operations and International, Paul Bloodworth said: “The release of nominations for the three biggest events in Victorian racing is always an exciting time of the year, as it starts the official countdown to the 2022 Spring Racing Carnival, which gets underway with Memsie Stakes Day at Caulfield at the end of this month.

“If State Of Rest, Anamoe, Zaaki and Saeed bin Suroor’s Real World all make it to the 2040-metre starting line at The Valley on 22 October, it would be a very fitting way to celebrate the centenary year of the Ladbrokes Cox Plate.

“State Of Rest has since cemented his reputation as an elite athlete by taking his tally of Group 1 wins to four this year, whilst Anamoe and Zaaki both hold strong claims to be the best middle-distance horse in Australia.

“With Incentivise missing the spring and Verry Elleegant continuing her career overseas, we won’t see the defending champions return for the Caulfield and Melbourne Cups, but their absence offers the opportunity for other challengers to write their own chapter in the long and storied history of both races.

“It is heartening to see entries at record levels for the Melbourne Cup and to see international entries return to pre-pandemic levels. The spread of international entries is fantastic with 56 horses from England, Ireland, France and Germany, as is the number of European trainers who have entered horses for the very first time.

“Whilst there is an element of the unknown and therefore intrigue with the international contingent, many of the local nominees will be very familiar to Australian audiences, with Ed Cummings’ Caufield and Melbourne Cup favourite Duais coming of age in the autumn courtesy of her two open age Group 1 wins.

“The Cummings name is intrinsically linked to the Victorian Spring Racing Carnival, with Bart having won 12 Melbourne Cups, seven Caulfield Cups and five Cox Plates, and his grandsons Ed and James take their strongest hand into this year’s races as they strive to join Bart on these coveted honour rolls.

“The Victorian Spring Racing Carnival has delivered some of the country’s most memorable moments, and with more than $120 million in prizemoney and bonuses available this spring and many intriguing storylines set to be written, I have no doubt this year’s carnival will again be one to savour.”

Northern hemisphere four-year-old Loft has been nominated for both the Caulfield and Melbourne Cups by his Australian ownership group, several of whom won Caulfield’s showpiece occasion last year with Incentivise.

For now, Loft remains in the care of German horseman Marcel Weiss, whose list of accomplishments include winning the famous Prix de l’Arc de Triomphe in only his second year as a trainer. His last run saw Loft win a second straight Group 2 in the Belmont Gold Cup Stakes (USA), run over the Melbourne Cup distance of two miles.

The recent Group 3 Gordon Stakes at Glorious Goodwood could also prove a useful form guide for the Cups, with Deauville Legend (trained by James Ferguson) and Hoo Ya Mal (who is set to join the Gai Waterhouse-Adrian Bott stable upon arrival in Australia) both being readied for the Victorian Spring Racing Carnival.

Aside from Duais, the local entries for the Caulfield Cup are headed by Mornington Cup winner Crystal Pegasus – who holds a ballot exemption; Huetor, who lowered Zaaki’s colours in the Doomben Cup (2100m); and his fellow Group 1 winners Montefilia (David Payne), Mr Brightside (Team Hayes), and Profondo (Richard Litt).
Yonce, who ran up five straight wins for the all-conquering Maher and Eustace stable at the start of the year, is one of 16 nominees from Victoria’s leading trainers whilst imported filly Cap De Joie, who is two from two in Australia, is an intriguing nomination from the in-form Nick Ryan stable. 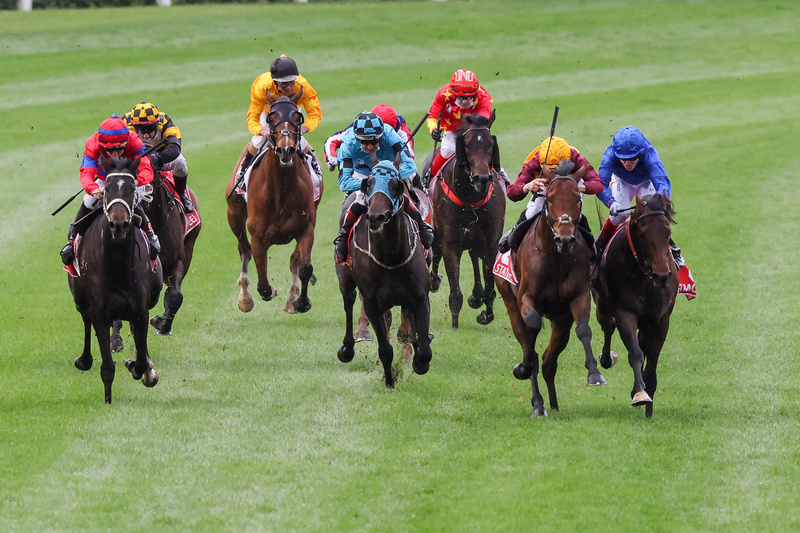 State Of Rest (IRE) and Anamoe (right) in the 2021 Group 1 WS Cox Plate at The Valley, picture Racing Photos

The last filly to win the Cox Plate was Surround in 1976, so the entry of last season’s dominant juvenile Fireburn (Gary Portelli) creates intrigue among the three-year-old entries for the centenary edition of Australasia’s weight-for-age championship.

A total of 27 Group 1 winners feature among the entries for the 2022 Cox Plate.

Flemington Danny O’Brien would appear to hold a solid hand as he bids to win a second Melbourne Cup, following Vow And Declare’s victory in 2019.

The now seven-year-old is being set for another attempt at the Cup by O’Brien, whilst Regal Power, Western Empire, 2020 Penfolds Victoria Derby (2500m) placegetter Young Werther and last-start Group 2 Perth Cup (2400m) hero Midnight Blue are also amongst his entries.

Irishman Dermot Weld, who has two Melbourne Cup wins to his name with Vintage Crop (1993) and Media Puzzle (2002), could aim to complete a hat-trick of victories after he nominated his Stakes winner Falcon Eight.
Headlining the 43 international entries is the Richard Hannon-trained Mojo Star, a last start runner-up to Kyprios in the Ascot Gold Cup, while others that create great interest are French Group 1 winner El Bodegon, the in-form Without A Fight and Royal Ascot winner Changingoftheguard.

Skyphios was sired by Fiorente, the winner of the 2013 Melbourne Cup for Gai Waterhouse, and the first lady of Australian racing – who now trains in partnership with Adrian Bott – will hope Sydney Cup winner Knights Order or their recent acquisition Hoo Ya Mal can land her another victory in Australia’s most famous race.

With prizemoney increased to a record $3 million for the Caulfield Guineas on 9 October, the number of entries has soared from 278 last year to 324 in 2022.

Magic Millions winner Coolangatta, Godolphin’s unbeaten filly In Secret, the highly touted Koshu and a trio of classy fillies from the Peter and Paul Snowden stable in Ghaanati, Paris Dior and Revolutionary Miss are among the other notable entries.