No Invincible duo but Walker lives in hope

Mark Walker is hopeful his Singapore Gold Cup duo of Yulong Edition and Sacred Croix can turn their form and fortunes around in one of the widest open versions of the third Leg of the Singapore Triple Crown series this Saturday.

While the first two Leg weight-for-age winners, Top Knight (Group 1 Queen Elizabeth II Cup over 1800m, 2nd Leg) and Aramaayo (Group 1 Raffles Cup over 1600, 1st Leg) are likely to start as the two top picks, the handicap nature of the $1 million Group 1 Singapore Gold Cup (2000m) does act as a leveller for the other 14 runners, albeit to various degrees.

Top Knight carries the topweight at 57kgs, while Yulong Edition is on 54.5kgs and Sacred Croix is given the minimum weight of 50kgs. 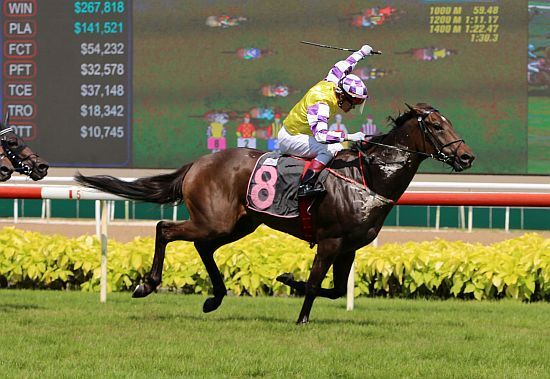 On ratings and on paper, Walker’s two runners come under sufferance. For instance, Yulong Edition, a six-time winner (1600m to 2000m) should have been on 52kgs to reflect the 10-point gap between him and Top Knight, but because of the adjustment of the handicap to four points to the kilo instead of the standard two points for the Singapore Gold Cup, he picks up another five pounds.

Despite those weights and measures setbacks, Walker still welcomes the relief as better than nothing, but is mindful of a myriad other factors which can affect the state of play.

“Realistically, both horses will start at long odds, but they’ll run their chances,” said Walker.

“It’s (trial) not something I do all the time with my Gold Cup runners. I just felt those two needed one.

“Every horse is different. I remember Elite Invincible (Walker’s only Singapore Gold Cup winner in 2018) worked on grass on the Cup week and he also went 1400m into the Gold Cup, just like Yulong Edition this year, but it may work on some and not work on others.

“It’s a very open Cup this year. A lot will depend on the track, we’ve had four or five wet weekends in a row.

“For example, Sacred Croix will be on the minimum weight and has drawn one. If it’s a dry track, that’s the place to be in, if it rains, that’s the worst place, even if with Benny (aboard at all his four wins from 1200m to 1600m – scored in succession in 2019 - at Kranji) back on him, I’m sure he can give him the best possible run.

“In saying this, Sacred Croix doesn’t normally handle wet tracks, but at his last start (in a Class 3 race over 1800m on October 31 when sixth to Big Hearted), he handled it really well, so it’s really hard to tell at times.”

A six-year-old by sire of stayers Savabeel, Sacred Croix was this time last year regarded as the dark horse in the Dester Singapore Gold Cup, but eventually ran fifth to Mr Clint, one of his opponents again this year.

Yulong Edition, the Irish-bred Makfi five-year-old who trounced a Kranji Stakes A field in an 1800m race on a yielding track earlier in the year, has also blown hot and cold when the track takes a soaking.

“Yulong Edition didn’t handle the wet track at his last start (Class 2 race over 1400m). Yes, he won on a wet track before, but that one was too heavy,” said Walker who has booked French jockey Marc Lerner for the ride on the Yu Long Stable-owned galloper.

“The trip was too short, anyway. We also rode him back and it didn’t work; he will go forward in the Gold Cup even if he’s drawn out in 17.”

Last year, Yulong Edition took out the “consolation stakes” on Singapore Gold Cup day. He didn’t make the cut in last year’s edition won by Mr Clint, but led all the way in a Kranji Stakes C race over 2000m with apprentice jockey Mohammad Nizar up.

One year on, it’s the Real McCoy, but ironically when he gets a bite of the cherry, the form has tapered off.

“He was going through the grades last year, but he’s up in grade this year, and it’s been tougher for him,” said Walker.

In a certain way, the three-time Singapore champion trainer was echoing his own fortunes for this season.

After topping the log for the longest time, even after racing resumed from the COVID-19 three-month break in July, Walker suddenly surrendered the lead to challenger Michael Clements at the end of September when his win machine hung at 40 winners.

He has since snapped out of the lull with Hadeer on November 7, but in the meantime, Clements has shot clear to the half-century mark with his greater momentum of winners while Lee Freedman has also crept up to join him on 41 winners, with Walker barely hanging on to second place on a better countback for seconds.

“This year didn’t suit bread-and-butter horses,” said Walker, while alluding to a season COVID-19 has shrunk to 43% of its total number of meetings (from 83 to 47 meetings).

“They can’t race enough to drop back down to an easier grade to win races. It’s been a frustrating year, not just for me, and I’m looking at regrouping next year.”

The 2021 season will, however, for the first time for the former five-time New Zealand champion trainer start without a person who has been a major cog in the wheel since his arrival at Kranji in 2010 – Gus Clutterbuck.

The New Zealand horseman is returning home with wife Karen after the last 2020 meeting on December 27, but Walker said he would not be recruiting anyone from outside to replace his former right-hand man.

“I will look at staff from my own ranks to promote to Gus’s position. It’s very difficult to hire anyone from overseas, or even locally these days,” said Walker.