The Ballymore stables of Mike Moroney and Pam Gerard have plenty to look forward to over the Auckland Cup Carnival, following the performances of proven stayer Sound and progressive mare Tia d’Or on Saturday.

“It was only his second run back after Mike (Moroney) gave him a race over 1800m in January at Caulfield,” Gerard said.

“Troy (Harris, jockey) thought he had the outside horses covered, but didn’t quite see the light weight (Robusto) come up the inside, and he was giving her seven-kilos. Troy was really happy, said the horse was out on his feet the last bit but it was still a huge run.

“He got a little bit galloped on in behind but he seems to be okay. It was a really good effort.

“He should be in the Auckland Cup for a long way. He had a good blow and we’ll keep his fitness up. I thought in the birdcage he looked a little bit pretty, but we just have to get him to the next level.”

Sound ran well for second in last year’s Auckland Cup on a hit-and-run mission from Moroney’s Flemington stable, with the trans-Tasman conditioners opting for a two-start New Zealand campaign this time around.

“With the Avondale Cup being a penalty-free race into the Auckland Cup it was the best option for him,” Gerard said.

Sound will likely be on a plane to Sydney following the Auckland Cup, where races like the Gr.1 Tancred Stakes (2400m) and the Gr.1 Sydney Cup (3200m) are possible targets.

While Sound is a proven staying commodity, progressive Tavistock four-year-old Tia d’Or looks a stayer of the future after winning a Rating 65 2100m event at Ellerslie on Saturday under a controlled front-running Samantha Collett ride.

“There is a Rating 74 2100m race back at Ellerslie that is worth $50,000 and we will just look at stepping her through the grades,” Gerard said.

“We will probably put her out for a spell after that and hopefully she will improve again. She is a big mare that has taken a bit of time, but she is from a very good family, being out of a Zabeel daughter of Giovana.

“Given the time, she is just getting better and better. She was quite green when she first started racing and she has taken a long time but she was always going to be worth the wait.”

Gerard said a decision would be made over the next few days as to whether their pair of Gr.1 Vodafone New Zealand Derby (2400m) entrants, Tokorangi and Grip, would contest the $1 million feature but she wasn’t reading too much into the latter’s run for ninth in Saturday’s Gr.2 Avondale Guineas (2100m).

“We’re still deciding at this stage. We will work out plans with Tokorangi in the next few days,” Gerard said.

“Grip’s run in the Avondale Guineas probably didn’t look that good, but he got a long, long way out of his ground and he is a horse that really needs to be kept in touch. It wasn’t his type of race. He is quite a laid-back fella and getting the 2400m will be no problem for him.

“He pulled up well and came home and ate up, so my gut feeling is I’d be happy to have a go.” 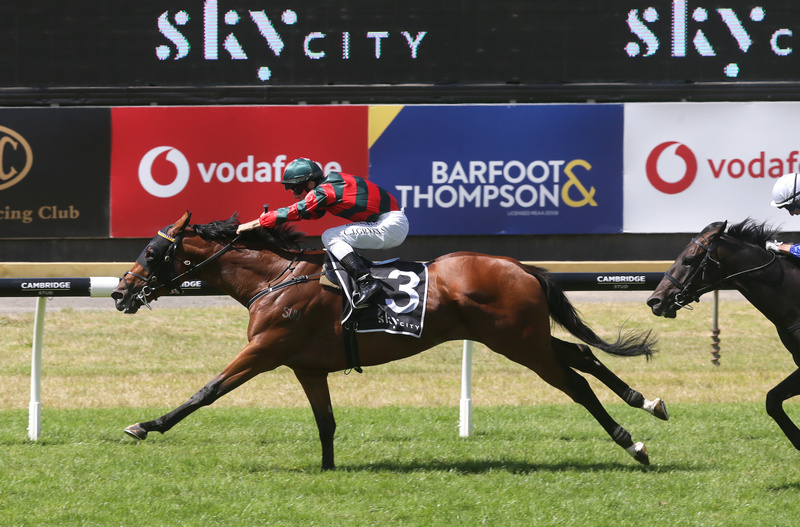 For the second year running, Hermitage Thoroughbreds has a three-year-old with a huge chance to win the Gr.1 Vodafone New Zealand Derby (2400m).

Rocket Spade confirmed his spot at the head of the male classic crop with a tough victory in the Gr.2 AJC Avondale Guineas (2100m), hitting the line strongly to defeat Jason Belltree and On Display.

In doing so, Rocket Spade followed the path of Dragon Leap, who like Rocket Spade had also won the Gr.2 Auckland Guineas (1600m) on New Year’s Day.

Both are trained by Lance O’Sullivan and Andrew Scott and raced by Hermitage Thoroughbreds, a racing and breeding operation owned by Hong Kong businessman Eugene Chuang.

A retired banker and financier, Chuang and his wife Karen devote much of their time to
philanthropic pursuits, particularly in the area of childhood development and
education.

“They deserve every success,” O’Sullivan said. “They have put a bit of money into racing, in Australia as well as New Zealand, so it’s great to see them getting the rewards.”

“He’s still got to run 2400m. You don’t know until you actually try them, but we think he will. Certainly his style of racing suggests he would get further.”

Rocket Spade is currently second favourite for this year’s Derby with TAB bookmakers behind the filly Amarelinha, who has yet to be nominated for the race.

Dragon Leap went on to finish fourth in the Derby, failing to stay the 2400m after hitting the lead 400m out in a taxing contest.

He hasn’t raced since finishing eighth of 11 in the Gr.2 Tramway Stakes (1400m) at Randwick last September, suffering a minor injury which stopped his spring campaign.

“He’s probably done about 10 weeks of rehab with us so he’s probably not far away from picking up in his work. He has another scan this week, and if we have the all-clear, we can speed him up. He should be racing again this season.”

Rocket Spade wasn’t the only winner for Hermitage Thoroughbreds at Ellerslie, with Cha Siu Bao winning a rating 74 event over 1600m.

Cha Siu Bao wasn’t far off the best three-year-olds four seasons ago, finishing fourth in the Gr.1 New Zealand 2000 Guineas (1600m), Gr.2 Great Northern Guineas (1600m), and the Gr.2 Waikato Guineas (2000m). He’s found it hard to bridge the gap to the top horses since then, and Saturday’s victory was his fifth from 34 starts.

“He’s got above average talent, but he mixes his form and he’s got to want it. We were fortunate to have Opie (Bosson, jockey) on board on Saturday.”

Ellerslie wasn’t the only place O’Sullivan had success last Saturday, as he is one of the owners of Defibrillate, winner of the Listed Neds Mornington Cup Prelude (2000m) at Caulfield.

O’Sullivan is a close friend of fellow Matamata trainer Graham Richardson, the main owner of Defibrillate. Richardson prepared Defibrillate to win two of his three New Zealand starts before sending him to Victorian trainer Patrick Payne.