The Mel and Warwick Coles-trained filly has been a model of consistency throughout her career, finishing out of the top three on only two occasions in nine starts before Saturday’s contest.

The daughter of Valachi Downs Stud-based stallion Vespa had been in the firing line in all three starts this campaign without registering a victory. All that changed courtesy of a heady ride from jockey Samantha Wynne, who took bad luck out of the equation from barrier rise as she sent Chokito straight to the front.

Wynne set-up a steady pace and gave Chokito her head rounding the home bend. With a wall of horses chasing her, Chokito found a good kick to hold out the desperate lunge of Milford Sound with Gone With The Wind charging home for third.

It was an emotional victory for co-trainer Warwick Coles who prepares the filly in partnership with his father Mel.

“It’s great to see her get that win today as we nearly lost her at the end of her first campaign,” Coles said.

“She picked up a bad virus after her win here (Invercargill) as a two-year-old.

“We had to put her away for a lengthy spell and it was touch and go there for a while.

“The vets didn’t know what it was, she had a hell of a temperature and looked like death warmed up at times.

“She finally got over it though and has taken these first few runs to work her way back to full fitness.”

While Coles had been pleased with her efforts to date, he felt a slight change in tactics were required and the plan paid off for his charge.

“It was just brilliant today as Sam has been trying to settle her in her races and it hasn’t really been working,” he said.

“This time I said we are going to go down there and let her bowl along in front and see if she will settle that way.

“I thought if we took the bull by the horns it might get her into a rhythm and Sam did a great job on her.

“I knew she could get the mile as she had been taking ground off them in her last couple of runs and especially around Invercargill where it suits a front-running style.

“Now she’s at full fitness the plan worked out thankfully.”

Coles will travel home with Chokito before deciding on her next target.

“I’m not sure where to go next as our only thought was if she didn’t get the trip, we would take her home and freshen her up,” he said.

“We’ll let her get over this one as it is a big trip away and maybe have a look closer to home.”

Chokito is the first foal of Pins mare Pretty Woman, a daughter of Group One placed mare Howmuchyacharging and has now won four of her 10 starts. 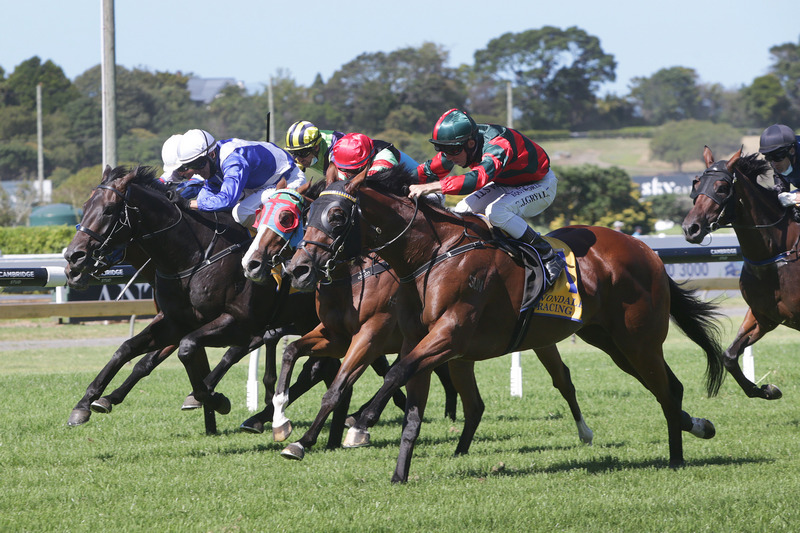 The Lance O’Sullivan and Andrew Scott-trained colt had entered Saturday’s vital Derby lead-up as the $4.50 second favourite for the blue riband event in a fortnight and strengthened his claims as he overcame a rocky run in midfield to storm home out wide and claim the major spoils from a number of his potential Derby rivals.

Punters installed the son of Fastnet Rock as a warm favourite to take out the Avondale Guineas off the back of a gritty effort for second against the older horses in an open handicap over 2100m at Te Rapa earlier in the month.

A sensational start to the race, which saw rider Sam Weatherley dislodged from Ulaanbaatar after 100m, threw the event into some chaos with riders taking a hold of a number of runners as the riderless horse made his way to the head of the field.

Grylls launched his attack at the 200m and slowly wore down the pair to win by a long neck from Jason Belltree with On Display clinging gamely to third ahead of Lord Ardmore and Milford.

O’Sullivan and Scott took out the 2020 edition of the Avondale Guineas with Dragon Leap, who raced in the same Hermitage Thoroughbreds ownership as Rocket Spade, with O’Sullivan believing Rocket Spade has better credentials for the Derby than his former stablemate.

“I think we learnt last year that this year we have a horse who is a little more dour and more likely to run out the distance as opposed to Dragon Leap who was essentially a miler,” O’Sullivan said.

“You just never know until they go the mile and half of the Derby whether they will stay, but on that performance today, I would like to think our guy certainly has the credentials to do that.”

O’Sullivan was particularly pleased with the ride by Grylls who provided a cool, calm and collected effort to secure the victory.
“It was a top ride by Craig as we asked him to ride him in fifth or sixth and just let him find his way into the race,” he said.

“When we arrived on course the horse was a little bit hot, but Craig got him relaxed and in the end, it was a pretty cool ride.
“Overall, it was just a good solid run as he kept on coming and really held them nicely over the final stages.

“The race today should help him as he looked as though there was still a little improvement in him, so come the Derby in a fortnight he will be spot on.

“We’ll take him home and just tick him over and we’re looking forward to coming back for the Derby.”

Bookmakers reacted by tightening Rocket Spade into a $3.50 Fixed Odds quote for the Derby, behind Te Akau Racing runner Amarelinha at $2.50, although the Savabeel filly is yet to be confirmed as a starter in the race.

The Murray Baker and Andrew Forsman-trained six-year-old shrugged off a disappointing run in the Gr.3 Wellington Cup (3200m) at her last start to thrust her name into Gr.1 Barfoot & Thompson Auckland Cup (3200m) contention as she overcame traffic problems in the home straight to claim her biggest career victory.

Given a perfect run in the trail by rider Sam Collett, the daughter of Zed tracked Sound into the race on the home corner before shooting through on his inner at the 200m.

Just as Sound was being hailed the winner, Collet poked through along the fence on Robusto who produced one last tenacious burst of speed to head her rival in the shadows of the post, with stablemate Star Tsar snatching third out wider on the track.

Co-trainer Andrew Forsman, who was keeping one eye on the proceedings at Rosehill where star three-year-old Aegon was to make his Australian debut later in the day, was delighted with the performance by the stablemates.

“That was a real gutsy effort by Robusto as she got baulked a little and still put her head down and really finished it off,” he said.

“We weren’t sure what to expect today as it was a funny run at Trentham last time.

“She kept getting shuffled back and out of her ground and when she got clear the race was all but over.

“It was hard to know how she would go after that as it could have been she had been up too long in this prep, but the way she went and found the line was really encouraging.

“Star Tsar also went super for a horse that has really got through the grades pretty quickly and is not very experienced at this level.

“He tends to loaf a bit and is just a big, one-pacer but he really stuck to his guns in the run home.”

Robusto and Star Tsar hold nominations for the Auckland Cup although Forsman is wary that both horses will meet runner-up Sound worse off in the weights for the two-mile feature.

“Sound is going to have to be the horse to beat in the Auckland Cup,” he said.

“Robusto will meet him 3.5kgs worse off while Star Tsar will be 5kgs worse off, so it is a big swing to overcome.

“In saying that though, if they can both run as well as they did today then I think they will be right in the fight.”

Forsman and training partner Baker will also be discussing the Gr.1 Vodafone New Zealand Derby (2400m) prospects of three-year-old colt Frontman who finished a gritty second against the older horses over 2100m in the last race on the card.

“I though Frontman put in a really good effort off a mixed preparation,” he said.

“At this stage I don’t think he would be out of the Derby but it all might come a little bit quick for him.”

TAB Bookmakers have Sound as the $3.50 Fixed Odds favourite for the Auckland Cup with Star Tsar equal second favourite ($6) alongside Platinum Invador ($6) and Robusto at a $9 quote.

Forsman had plenty to be excited about later in the afternoon when Sacred Falls three-year-old Aegon, who he co-owns with the Zame family, made the ideal Australian debut when racing away to win the Gr.2 Hobartville Stakes (1400m) at Rosehill by an increasing two-length margin.