Buoyed by a half-million dollar success from two of his human proteges, Allan Sharrock is hoping for big things from three of his equine stars at Otaki on Thursday.

The Taranaki trainer heads to the Levin Racing Club meeting with Tavi Mac, Waisake and Our Hail Mary, an exciting trio that all have black-type targets ahead of them this season.

Scott was a stable foreman for Sharrock in the 1990s, while Walker’s stellar apprenticeship was under Sharrock’s tutelage.

“I was best man at Scotty’s wedding, and Michael’s like a son,” Sharrock said.

“I’ve spoken with Scotty a couple of times since the weekend and he’s pretty upbeat. I was thrilled. It was a real Taranaki job.”

Sharrock’s hand for Otaki is headed by cult hero Tavi Mac, an equine ugly duckling who is looking for more black-type in the Listed Courtesy Ford Levin Stakes (1400m).

A winner of eight races from 13 starts, Tavi Mac has been racing since July, with the highlights being a second placing behind Avantage in the Gr.2 Foxbridge Plate (1200m) and a very easy win carrying 59kg in the Listed Matamata Cup (1400m) on October 10.

He’ll need to shoulder 60kg at Otaki, but Sharrock has every confidence in his gelding.

“He’s only a little horse but he seems to carry the weight no problem. He’s earned the weight I suppose, and we can’t duck and dive, he’s got to carry it.”

Sharrock said Tavi Mac is likely to start once more after the Levin Stakes this campaign most likely in the Gr.2 Manawatu Challenge Stakes (1400m) at Awapuni in December, though continued good form could see him aimed at a race like the Gr.1 Telegraph (1200m) or the Gr.1 Thorndon Mile (1600m) at Trentham in January.

Further than that, Sharrock has some ambitious targets for 2021.

“I wouldn’t rule out Brisbane in the winter, or we might look at the spring next year in Hawke’s Bay. He’s a serious racehorse and he’ll be more competitive knowing a bit more next year.”

“He’s probably got to learn the racing game, but he’s a tenacious little fella. He wants to win, that’s the big thing with him, and he’s still got plenty of improvement.”

Waisake, who contests a Rating 74 2100m race, won three starts back at Hastings and has earned two third placings since then, while Our Hail Mary has her second start for the season in a Rating 74 1400m contest, having not started since a fast-closing fifth at Hawera on October 10 due to a wide draw in a scheduled Awapuni start.

“Waisake’s work in the last two weeks has been outstanding, and with Troy Harris back on him he’s a good chance as long as the track’s not too wet.

“Our Hail Mary is quality and she’ll be a good chance as well, though I think she’s probably going to be a better mare over 2000m.

“She will head towards a Group race later on. What it will be at this stage I don’t know, I’m going to try and keep her and Sinarahma apart, but she may end up being targeted at the Wairarapa Breeders’ Stakes (Listed, 1600m), a race Sinarahma won last year.” 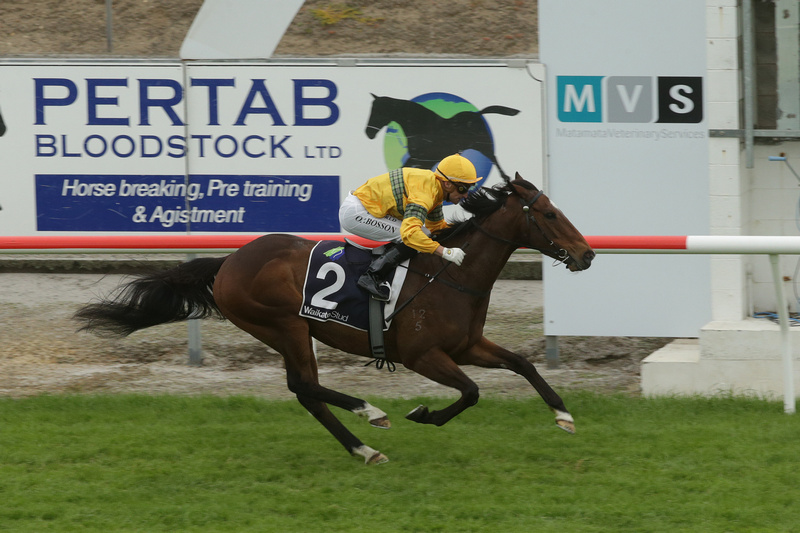 Synthetic track gets tick of approval

The Cambridge Jockey Club’s new synthetic track has received a tick of approval from leading jockey Samantha Collett after its first set of trials on Tuesday.

It was the second time the ace hoop has ridden on the track after previously riding on the surface at the jumpouts earlier this month.

“I think it is really fantastic,” she said. “The club can be really proud of what they have produced.

“I was fortunate enough to have a few rides around at the jumpouts prior to today’s trial meeting and it really impressed me then.”

The jumpouts were conducted in inclement weather and Collett said the track handled just as well then.

“You could feel a bit of moisture under the horses feet but there were no inconsistencies. It seemed to ride just as well as it did today,” she said.

Collett said the track is a godsend for trainers in the region and horses will benefit a lot from trialling and racing on the surface all year-round.

“I feel like the track is really nice and forgiving,” she said. “It is going to produce a really nice, even surface that we can look forward to using all year round, especially in the winter months when our turf tracks are deteriorating. It’s going to be a great tool to have.”

Collett also noted that there wasn’t a noticeable difference in the amount of kick-back from the synthetic surface in comparison to New Zealand’s regular turf tracks.

“I haven’t been too far back today, but looking at some of the guys and girls that have come back in, there has been a little bit of kick-back, but not anymore or any less than what you would on a turf track,” she said.

Collett couldn’t have been more pleased with the way the track handled on Tuesday and she said the universal consensus in the jockeys room was positive.

“I think everybody is pretty happy,” she said. “From a rider’s perspective you just want to give your horse every opportunity to educate it and give it a good day out.”

Promising three-year-old Basarwa will have to overcome his outside barrier in the Gr.3 Lucia Valentina Wellington Stakes (1600m) at Otaki on Thursday to keep his undefeated record intact.

The son of Atlante won comfortably by 1-1/4 lengths on debut at Hastings earlier this month and trainers Guy Lowry and Grant Cullen believe he is up to tackling stakes company second-up.

They were pleased with his debut effort but admit he still has a lot to learn.

“I thought it was a good run, which followed up his strong trial (win a week prior),” Lowry said.

“He had the best sectionals of the day. He is a talented horse but just does a lot wrong. He is a work in progress.”

Lowry said his ultimate goal this preparation is the Gr.1 Levin Classic (1600m) at Trentham in January and Thursday is just another step to reaching that target.

“He is on the way to the Levin Classic and this is just one of those stepping stones,” he said. “He seems well and there’s no reason not to have a crack.”

While he has drawn the outside gate in the 13 horse field, Lowry said with rain forecast in the lead-up to Thursday his biggest concern is the track.

“I don’t know how much rain they are going to get down there, but that’s a bit of a concern for everyone,” he said.

Lowry is looking forward to Thursday and he said it would be nice to win the race for co-breeder and part-owner Lib Petagna, who owns the race’s namesake, multiple Group One winner Lucia Valentina.

Basarwa will be joined on the float trip south from Hastings by Shez Ekstra who will contest the Levin Christmas At The Races 18 December At Otaki (1600m).

The five-year-old mare finished unplaced at Otaki earlier this month in what was her first run in 13 months.

Lowry was disappointed with the result and is expecting an improved performance on Thursday.

“It was a disappointing first run. She got a bit wound up, I don’t know why,” he said.

“She’s talented enough and will improve from her run the other day.”

The daughter of Savabeel remains undefeated after winning over 1300m at Awapuni last Saturday, adding to her victory in the Listed El Roca – Sir Colin Meads Trophy (1200m) at Hastings in September.

“I thought her run on Saturday was good,” Lowry said. “She has got full blinkers on and probably didn’t see the other horses coming. She ran through the line when the others came up alongside her, so I thought that was quite good.

“She will benefit a lot from the run. She certainly wasn’t cranked up.

“She will run in the Eulogy in three weeks’ time.”