Connections of Nature Strip had a $2million offer for the horse put to them, but part-owner Rod Lyons said they were never really in a position to take it up.

The spruik horse of the Melbourne winter has so far lived up to the hype, posting back-to-back Flemington victories in his only two starts since joining the Darren Weir stable.

Ahead of his scheduled next start in the Group 3 Bletchingly Stakes (1200m) at Caulfield on July 28, where he is set to take on the likes of Vega Magic, Danon Liberty, Ardrossan and Inn Keeper, Nature Strip's ability/potential remains a point of contention.

But Lyons and his group of owners are confident the horse is no 'flash in the pan'.

"Yes we have [had offers]. The guys in it are a bunch of mates, some characters from Hamilton," Lyons told RSN 927's Racing Pulse on Monday.

"We never saw the money... we were offered $2million for him, but [he] was never really going to sell.

"All the blokes in the horse are rich bar me; I'm the only poor man.

"He's won half a million already, and you'd think if he stays sound and fit and trouble free, he can race until he's seven or eight, he's every chance of winning that sort of money."

He could go a long way to toppling that mark in stakes in one fell swoop come October - via The Everest, worth $13million, at Randwick.

Touted as a potential horse for the race with five empty slots remaining, Nature Strip could be in the mix - with Lyons confirming one of those slot holders has made contact.

However, it is not a be-all, end-all scenario to get the rising four-year-old into the rich race, Lyons understanding that if the horse stays right, they have seasons of racing ahead with him.

And he was quick to point out the horse, despite talk of having issues with his breathing, is sound as a bell.

"Very sound. People go on about this breathing issue he's got - he's never made a noise but they discovered the problem when they were scoping the horse one day," Lyons added.

"If ever he was going to make a noise would've been on Saturday into that gale - he was gasping for breath at the end there - but he's never made a noise.

"People don't know... when they're a bad roarer, they sound like a steam-train - this horse doesn't make that noise." 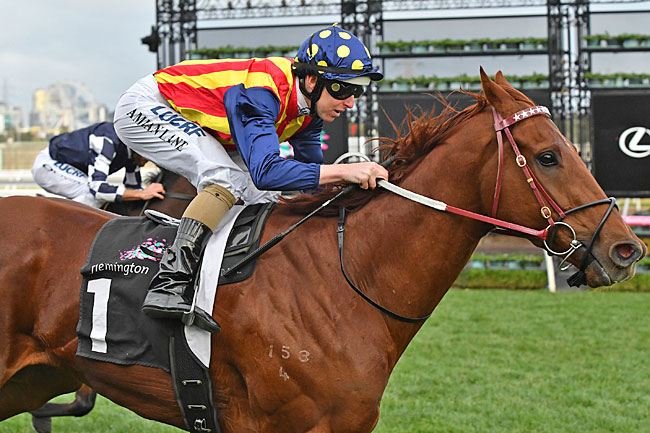