Australian race followers were given a reminder of the talents of Michael Rodd when the internationally travelled hoop produced a copybook ride on the Caulfield program in Melbourne to land the $108,000 MRC Take It To The Neds Level Handicap (1440m) aboard the unbeaten 3-year-old Mystery Shot (by Shooting To Win).

Probably best recalled for his Melbourne Cup winning association with leviathan racehorse owner Lloyd Williams, Rodd had been plying his trade in Singapore in more recent years before the affable jockey was forced to return to Victoria due to the Covid-19 pandemic.

Given the ride on Mystery Shot by syndicate owner Brad Spicer and trainer Lindsey Smith after winning aboard the lightly raced 3-year-old at Ballarat at his previous start, Rodd returned the favour with a thoroughly polished performance in the extended 1400m assignment.

Sent to post a short-priced favourite, Mystery Shot was the recipient of a near-perfect ride by the much accomplished jockey who had his partner running fourth soon after settling.

Once asked for a winning effort shortly after turning for home, Mystery Shot quickly established a winning break and was always finding enough to withstand a late charge from Splendoronthegrass (by So You Think) over the final 100 metres.

Scorpius (by Deep Field) battled on gamely for third after leading the field for a relative brief period entering the home straight. 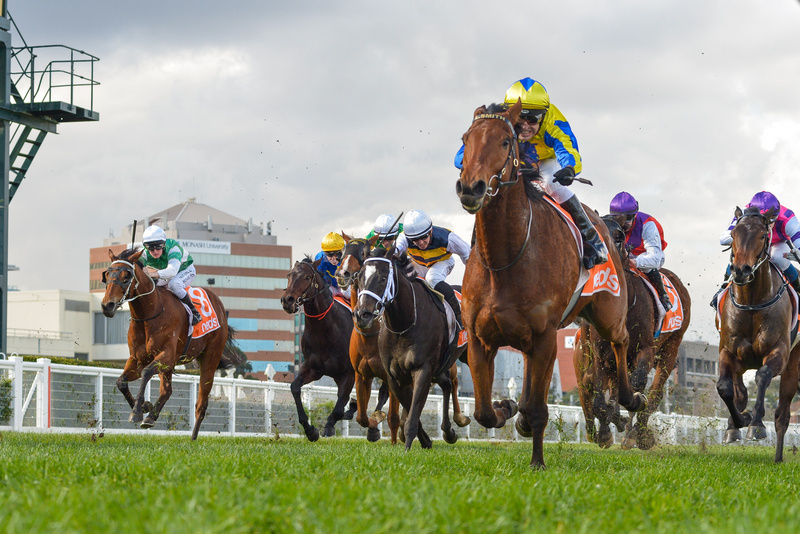 Rodd hasn't been short of rides or winners around the traps since his latest return to the riding ranks of Victoria, but was breaking through for his first winner in the Melbourne metropolitan area when piloting Mystery Shot to victory. Needless to say, the win came as a big relief.

“It’s great to finally get one [a Saturday city winner],” admitted one of the leading Melbourne jockeys of the recent past. “I’ve been waiting a couple of months now. It’s just taken a bit of time to get on a better quality horse.

“Lindsey [Smith] and Brad Spicer have been really good to me. They’ve been great supporters and this horse has been going well. They’re [Smith-trained gallopers] always well placed and when they come to the races they’re ready to go.

“It was a really good win first-up. He had a really good trial leading into it. We gave him half a little jump out around the tight-turning Polytrack at Warrnambool. I went down there the Monday before and gave him a good grass gallop. So to win at 1200 on a pretty wet track at Ballarat — I know they said it was a Soft 7, but by race nine it was quite wet then — it was a good effort.

“But to come here to 1400 and go and back that win up… I was confident, but wasn’t quite sure second-up.”

Asked about the likelihood of returning to Singapore in coming months, Rodd replied: “It’s really not viable at the moment. Things seem to be falling apart there, and I’d have to spend 14 days in quarantine anyway. I’m happy here and things are starting to come together.”

Asked via a telephone link for his views on the win of Mystery Shot, winning trainer Lindsey Smith remarked: “He was purchased by Spicer Thoroughbreds from New Zealand and they thought that he had some ability. I thought it was a really good effort winning on debut at Warrnambool because he pulled up shinsore. It was extra good to win with that.

“He still hasn’t furnished fully, and we’ll give him another run at 1600 metres in a couple of weeks. There’s some good races for him to aim for in January.”

Asked about combining with Michael Rodd for the victory, Smith responded: “I might’ve created a monster. Other trainers will start putting him on good horses and he might stop answering my calls.”

Smith added: “He’s a world-class jockey and so professional. He provides the owners with great information on video after the race and he works really hard. I’m surprised how often he’s been down here [to Warrnambool] to ride work and jump-outs.

“He’s got a good relationship with [Brad] Spicer and that all helps, too. He didn’t have much luck in Race 2, but he made up for it here.”

Mystery Shot started the $3.30 favourite, runner-up Splendouronthegrass at $11.00, and minor placegetter Scorpius at $5.00.