Model of consistency Muraahib turned up for a third Kranji victory in the $85,000 Always Certain 2011 Stakes Class 2 race over 1200m on Saturday.

The Lee Freedman-trained galloper has certainly done a sterling job maintaining a glowing record of never finishing worse than fourth in 13 starts, eight of them coming as placegetters for the Oscar Racing Stable.

A former four-time winner for trainers David Hayes and Tom Dabernig in Melbourne, the Reset six-year-old has already proven to be a handy moneyspinner at his new hunting ground, having now chalked up prize cheques toting up to around $225,000 for Oscar’s Mr Phua Chian Kin. 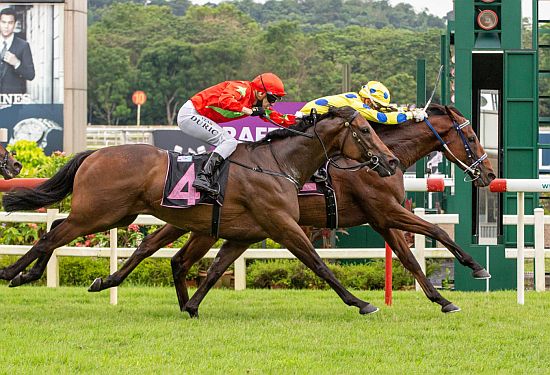 With regular partner of late A’Isisuhairi Kasim suspended for careless riding, Ruan Maia stepped into the irons and showed why he is currently the main challenger to three-time Singapore champion jockey Vlad Duric on the log with yet another polished display.

Frontrunner Aramani (Simon Kok Wei Hoong) took up the running, but was no match when Muraahib came collaring him at the 300m. Star Of Jupiter (Vlad Duric) did give the Freedman camp a scare when he burst out of the pack, lengthening up with a dashing turn of speed, but Muraahib was not to be outdone as he kept finding to prevail by a neck.

Aramani held on gamely for third place another 1 ¼ lengths away, just staving off Beau Geste (Ng Choon Kiat) who came from last to grab fourth place another neck away.

Backed down to $12 favouritism, Muraahib clocked the smart time of 1min 9.28secs for the 1200m on the Short Course.

“He’s a very honest and consistent horse, he’s been a terrific horse to the stable,” said Freedman.

“Maia got the chance to ride him today and he made no mistake. He was on the right horse.

“Muraahib won’t run again until the EW Barker Trophy. That’s the race I have in mind for him, he’s already well placed for that race.”

The Group 2 EW Barker Trophy (1400m) is a handicap feature due in a little bit over a month’s time on November 15.

Singapore’s premier sprint, the Group 1 Lion City Cup (1200m) comes up in a fortnight on October 25, but Freedman is leaning more towards the EW Barker Trophy, even if Muraahib now boasts two wins over six furlongs.

“Maybe not the Lion City. I already have Mr Malek and Excelling in that race,” said Freedman.

“I tend to fancy Muraahib more at the 1400m, but things may change.”