The back-on-song Mortal Engine handed both trainer Michael Clements and jockey Manoel Nunes the third leg of their respective winning treble at Kranji on Saturday.

The other two Legs of their hat-tricks of wins were achieved in combination with other parties. Nunes eventually went one step further by riding a fourth winner at his very first day at the office in 2022 (he missed the opening meeting through a one-day careless riding suspension) with Lucky Jinsha for up-and-coming trainer Tim Fitzsimmons (who was also at a treble) in the Lucky Last.

The three-time (2014, 2015 and 2016) Singapore champion jockey, who has been tipped by all and sundry to reclaim his mantle this year, was also successful aboard the two other Fitzsimmons winners, Dancing Light (see earlier report) and Super Atas, while 2020 Singapore champion trainer Clements had apprentice jockey Jerlyn Seow Poh Hui and jockey Oscar Chavez to thank for his two earlier winners, The Shadow and South Of The River (see earlier report) respectively. 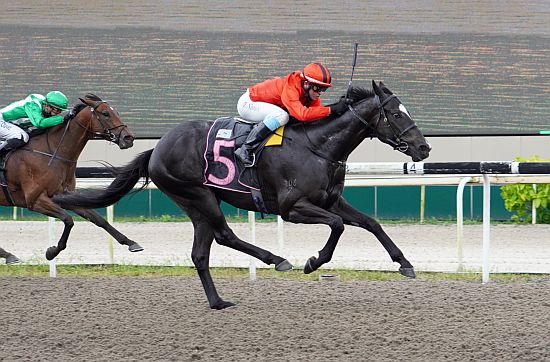 A four-year-old by Unencumbered, Mortal Engine gave a peek of his tremendous potential at his Kranji debut win in January 2021, but knee woes were to unfortunately sideline him for almost a year.

When he came back in a Class 4 race over 1200m in November, he failed to pick up where he left off. He was wide throughout, struggling to come back underneath jockey Louis-Philippe Beuzelin.

But it would seem that reboot after the long break had not only blown away the cobwebs, but also rekindled his winning flair.

Sent straight to the front by Nunes from their awkward alley, Mortal Engine hummed along under a nice hold with Dr Kardo (Saifudin Ismail) in a stalking position.

But once Nunes gave his trademark cues to flatten out – open up the reins while crouching lower into the saddle – there was no second-guessing where the thicker end of the prizemoney was heading.

Tivic Stable, whose red and black chevrons silks claimed the honours earlier through newbie Dancing Light, was back in the winner’s circle five races later when Mortal Engine ($29) laid down the law to stride in one and three-quarter lengths clear of a gallant Dr Kardo.

Shooting right up the rails, Seson (Oscar Chavez) momentarily shaped up as the beneficiary when Mortal Engine rolled off, but the latter was only wobbling out for a fraction of a second as he was dug up for the right gait.

Seson tried in vain to get on terms, in the end settling for third place another neck away. The winning time was 1min 4.71secs for the Polytrack 1100m.

“When he came back in November, he was short of a trial. He got one but we couldn’t get another one for him,” said Clements.

“He was a bit underdone at his first-up run as a result. We were able to get more work into him after that and he was spot-on today.

“He ran up to expectations. I’m happy I was able to get him to win again.

“This horse can handle both surfaces. When he goes up in class, then we’ll have a better idea what he prefers.”

With that second win from three starts, Mortal Engine has now racked up in excess of $65,000 in stakes earnings for the Tivic Stable.

Clements said the wide alley was of some concern when the cards came out on Wednesday, but decided in consultation with Nunes that the gelding’s natural gate speed should be put to good use.

“I discussed with Manoel about the bad barrier during the week. As he’s a horse who likes to go forward, there was no other choice in my mind than to use him up early,” said the Zimbabwean-born conditioner.

“We took our chances. He was able to take a breather and fortunately, it’s paid off.”

Nunes was also very enthusiastic about Mortal Engine as he had spent a lot of time with not just him since he returned from his long break at the end of last year, but also for his other three Fitzsimmons winners.

The fantastic four-timer has sent an ominous warning to his rivals this year, but the Brazilian rider remained grounded, and was above all grateful for the opportunity afforded to him, especially after the uncertainty of his prolonged downtime.

“I’m so happy to start the season with four winners. I had five seconds, too, it could have been better, but I can't complain and can't be too greedy, anyway,” said Nunes.

“I’m very happy with the way things have gone so far, considering I had a break for two years (stranded due to COVID-19 restrictions) in Brazil, and only rode for one month in November.

“And then just when I was getting fit, we stopped again in December, but to be honest, I rode every day except Sunday, which was my only day off.

“Fitness-wise, it’s not the same as riding in races, but it still helped me get fitter, especially at the barrier trials. Now that I have ridden at my first raceday, my fitness can only improve from now on.

“In saying this, I’m very grateful for the support from trainers and owners. Thanks to them, I get a lot of rides and without them, all this would not be possible.”