Moreira and Purton dish a double delight at the Valley

Joao Moreira and Zac Purton continued their enthralling back-and-forth contest for the jockeys’ championship with a double each at Happy Valley on Wednesday night.

“It’s such a journey; but it’s a good one!” Moreira beamed after having the final word – until next time, at least – on Shining Ace in the finale, the Class 2 Ho Chung River Handicap (1200m).

Hong Kong’s two standout riders – each a three-time Hong Kong champion – started the night all square on 117 wins and ended all even on 119.

Purton was fastest off the mark, edging one ahead when Dionysus Collin landed race two, the Class 4 Tan Shan River Handicap (1800m). It was the defending champion’s first sit on the Dream Ahead four-year-old and his booking made a difference as the Francis Lui-trained gelding knuckled down to earn a maiden win at start 20.

Moreira fired an immediate reply in the next with a sublime make-all ride on the Caspar Fownes-trained Lightning Steed in the Class 4 Tai Shing Stream Handicap (1650m).

“I rode him the time before but Caspar said this time it would be a bit different. The circumstances today just allowed me to ride the horse how he likes to be ridden and he quickened down the straight in a way that he was never going to get beaten,” Moreira said. 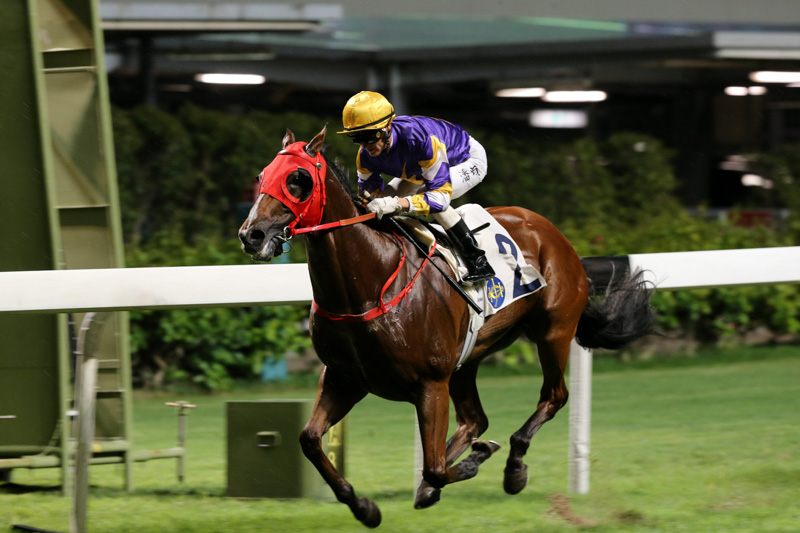 The big two were kept quiet through the middle part of the card but Purton was back in front when the Danny Shum-trained Golden Dash took the Class 3 Lam Tsuen River Handicap (1200m) under a sweetly-judged steer.

“We had a good draw so obviously that helped but Danny’s done a good job to bring him back from injury, he’s given him plenty of time and a couple of runs to get him ready for this,” Purton said.

“He drew the right gate (one) and enjoyed a little bit of give in the ground – he won’t be out of place in Class 2.”

Purton went into the last with a leg-up on the 3.3 favourite Amazing Star (133lb) but Moreira was not to be outdone. The ‘Magic Man’ ensured Shining Ace (125lb) held the rail in a prominent spot, applied pressure to Purton’s mount around the turn, and, when that rival began to fade, gave the John Size-trained four-year-old a dig and enjoyed a rolling run to the line through the rain.

“He just loves the wet; when he won with me before it was raining and the ground was soft,” Moreira said.

“I was surprised that he was able to bounce out so quickly and challenge those fast horses up there, but as well as he was going, he was never going to stop. It’s a great training achievement. All the praise should go to John – he’s improved this horse so much.

“Hopefully the winners will keep on coming,” he added.

Hong Kong racing continues at Sha Tin on Sunday, 24 May when the day’s feature will be the G1 Standard Chartered Champions & Chater Cup (2400m).