Graduates of the 2020 Four-Year-Old Classic Series, Golden Sixty and More Than This have had vastly contrasting careers since — like most in comparison to Hong Kong’s reigning Horse of the Year.

Pitted then as Hong Kong’s Generation Next, Golden Sixty has soared to inexorable height where he currently remains, while More Than This, with a few setbacks along the way, is without a win since December 2019.

But on his day, More Than This boasts a powerful finish and his two best efforts since his sparkling 2019/20 campaign have come at G1 level — twice behind Golden Sixty, including his heart-in-mouth second to Hong Kong’s champion in the 2021 G1 FWD Champions Mile (1600m) when he clocked the fastest final 400m (22.24s) of the race.

While this term, at his second outing, he again chased his imperious classmate into second, this time by slightly over a length in the G1 LONGINES Hong Kong Mile (1600m) against an internationally acclaimed cast from Japan, Ireland and Hong Kong last month.

Gearing up for his third start this season, More Than This is once again tasked with the all too familiar mission of attempting to overthrow the kingpin of Hong Kong racing, this time in Sunday’s HK$12 million G1 Stewards’ Cup (1600m) at Sha Tin. 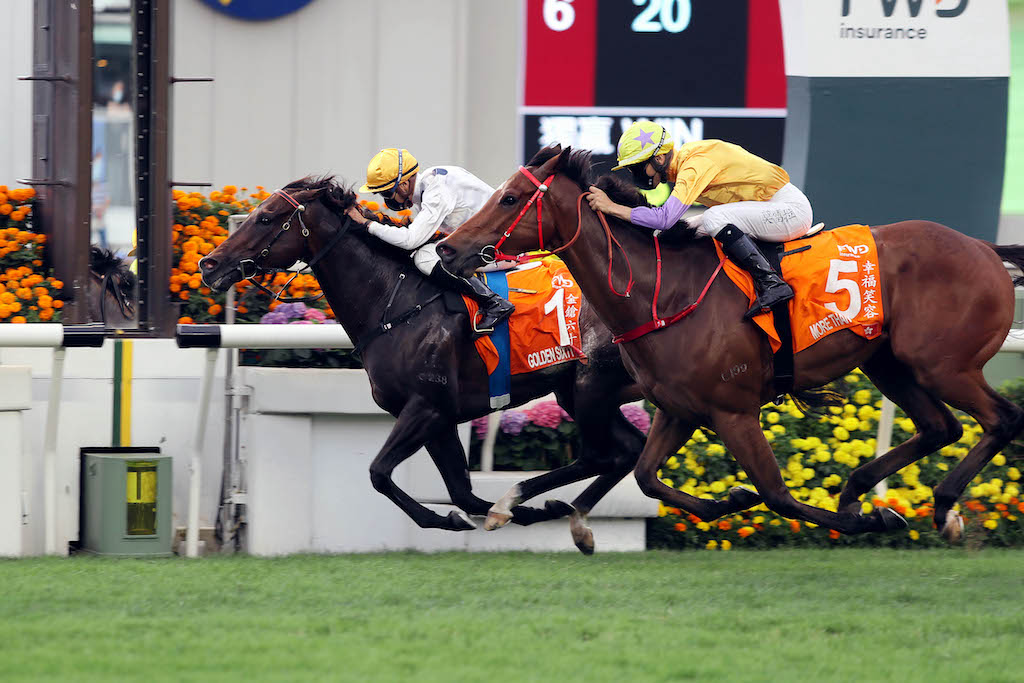 Golden Sixty shades More Than This in a previous encounter, picture HKJC

Jockey Derek Leung, while wary of the task at hand, is taking solace in additional “improvement” from the Dutch Art gelding between runs.

“I’m sure with a smooth run he will get some prizemoney. We have the Horse of the Year [Golden Sixty] in the race, but my horse is fitter now. He’s only had two runs this season, so his fitness is getting better and in the mornings he’s slightly improved,” Leung said.

More Than This, a four-time winner in Hong Kong, has collected a mouth-watering HK$23.52 million in earnings across his 20-start career in town and he’s laid down significant markers of late to suggest that he is Group 1 winner in waiting … especially if Golden Sixty was to bypass future contests in Hong Kong this season for an overseas option.

“He’s always quite laid back throughout the race. He jumps sharply, but he’s always laid back — at the 700 [metre mark] last start he was on the bridle and then we just followed Golden Sixty’s line throughout. He ran perfect last time and hopefully this time he will be fresh and run better,” Leung said.

“If the pace and everything in the race favours us then of course we can beat him, but you could see last time he was close to Golden Sixty and they took off early which helped More Than This and that’s how he got closer. It depends on how the race’s run and also the pace — we’re always against the same horses,” Leung said.

Chasing a first Group 1 crown since his success in the 2017 LONGINES Hong Kong Mile aboard Beauty Generation, Leung boasts 17 wins this term and is aiming to better the career-high 39 he collected throughout 2020/21.

“I think Danny [Shum] has done a very good job. The horse is fit, well and fresh,” Leung said.